All of the approximately 7,000 islands and reefs in the Caribbean Sea, except for the Bahamas, are included in the Antilles, and lie in a more than 4,000 km long arc from Cuba, just below Florida, to Trinidad and Tobago, just northwest of the Venezuelan coast.

Venezuela and has maritime borders with Grenada to the north-west and Barbados to the north-east. Trinidad and Tobago covers an area of 5128 km2 and consists, apart from many small islands, of two main islands, the larger Trinidad (4768 km2) and the much smaller Tobago (299 km2). Trinidad has an average length of 80 km and an average width of 59 km, Tobago, which lies 30 km north-east of Trinidad, is 41 km long and has a maximum width of 12 km.

Other islands belonging to the archipelago include Chacachacare, Monos, Huevos, Gaspar Grande (or Gasparee), Little Tobago and St. Giles Island. 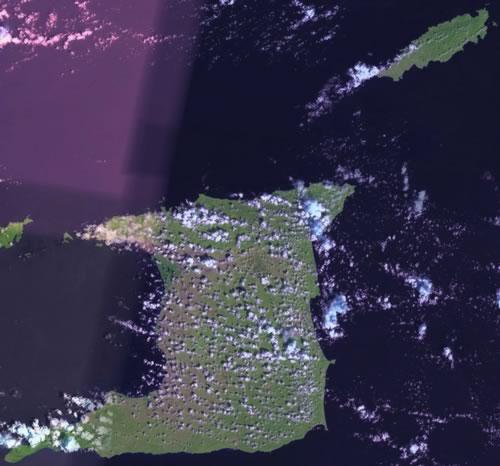 In the centre of the island of Trinidad are fertile plains and savannahs. The north coast consists of a mountain range, with dense forestation. The highest point is the 940 m high Cerro del Aripo. The southern part of Trinidad is hilly. In an extinct volcano in the south-west lies the largest natural source of asphalt in the world: the 40 hectare Pitch Lake.

The much smaller island of Tobago is also hilly, with the 549 metre high Pidgeon Peak as its summit. The southern part is mainly flat and has a limestone subsoil, formed by former coral. Geologically speaking, Trinidad and Tobago are part of the South American mainland. The mountain ridges are in fact a continuation of the coastal mountains of Venezuela. 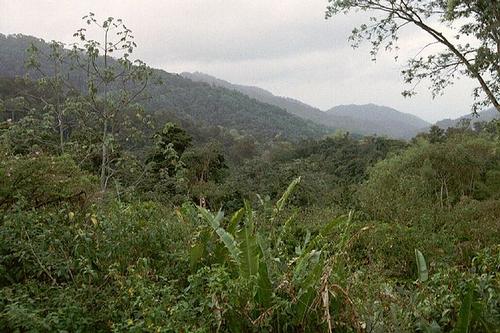 Both islands have a tropical climate. The dry season runs from January to May, with an average temperature of 26 degrees. The seawater temperature in summer and autumn averages 24 degrees. From June to December there are many short and heavy tropical rains. Trinidad and Tobago are not plagued by hurricanes, however. The west of Trinidad is much drier than the north-eastern and central parts. At night, it is rarely colder than 20 degrees at sea level.

In prehistoric times, Trinidad and Tobago was connected to the South American mainland by a lowered sea level. It was only when violent movements of Caribbean tectonic plates submerged the Orinoco delta around 10,000 years ago that Trinidad and Tobago was separated from the South American mainland. The two islands owe their impressive ecological diversity to this prehistoric period, which enriched them with many South American plants and animals, along with flora and fauna from the rest of the Caribbean. There are few places in the world that can offer such a large variety of plants and animals in a relatively small area.

Trinidad and Tobago have a great variety of vegetation. Twenty-three hundred species of plants grow on the fertile soils of the islands. Numerous are for example the hibiscus, bougainvillea and various orchids. The national flower of Trinidad and Tobago is the wild poinsettia. The mountain slopes are covered with large rainforests, where you can admire many tropical tree species. Mangrove forests can be found in swampy areas.

About half of the islands are covered with forests. Tobago has the oldest rainforest reserve in the Americas, while Trinidad has the much-visited Pointe a Pierre Wildfowl Trust and Asa Wright Nature Centre. Common plants and trees are the cassia, frangipangi, hibiscus, jacaranda, coconut palm.

More than 400 bird species have nested on the islands, ranging from the colourful manakins to the white flamingos. There are also many parakeets, brown pelicans, egrets and cormorants. The national bird of Trinidad is the red ibis, also called the scarlet ibis; the national bird of Tobago is the red-bellied chachalaca. Famous are the many hummingbirds that can hover in the air. One of the most important bird sanctuaries in the Caribbean is the island of Little Tobago, off the coast near the village of Speyside on Tobago.

There are also no less than 600 butterfly species. Other notable island inhabitants include monkeys, caimans and deer.

The coral reefs in the clear Caribbean Sea are teeming with multicoloured fish and are home to anemones and rare species of coral. The underwater life is surprising and varied, with for example dolphin, blue marlin, tarpon, barracuda, bonefish and kingfish.