The Republic of Venezuela (officially: República de Venezuela) is the sixth largest country in the South American continent. The country has an area of 916,700 km2. Venezuela measures 1271 km from north to south and 1493 km from east to west. Venezuela is located in the northeast of South America and is bordered to the north by the Caribbean Sea (the coastline is more than 2800 km long), to the west by Colombia (2050 km), in the south at Brazil (2200 km) and in the east at Guyana (743 km). The most northerly part of Venezuela is Aves Island, about 400 km north of Isla Margarita. 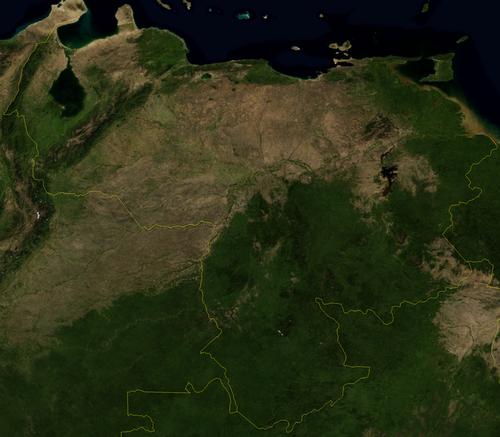 The Andes Mountains split into several mountain ranges, including the Venezuelan Cordillera de Mérida. Around the city of Mérida, the Venezuelan Andes reaches heights of up to 5000 meters. The highest peak is El Pico Bolívar (5007 meters). Between the Cordillera de Mérida and the Sierra de Perijálies the Maracaibo basin. This area is dominated by the large lake Lago de Maracaibo (with 13,500 km2 the largest lake in South America), where most of the oil is extracted. Because of the trade winds that blow here, it is a fairly dry landscape with even a desert-like dune landscape along the coast at Coro. The endless central plain in the middle of Venezuela is called the 'Llanos' and takes up one third of the land. This plain even extends deep into Colombia. The catchment area of the 2140 km long where the Orinoco River runs, along with innumerable rivers and canals. The Río Caroní is the second largest river in Venezuela with 640 km. Near the ocean, the Orinoco branches into an immense delta covered by swamp forests.
In the south of Venezuela lies the Guayana Massif and the Venezuelan Amazonas. Both provide a varied and fascinating landscape. The Guayana Massif is billions of years old. It is a flat shield, hundreds of meters thick. Earthquakes and landslides created highs and lows. Due to erosion, the shield was cut into pieces over time, and thus the approximately one hundred imposing mountains with their flat tops and steep slopes were created. Many waterfalls fall down here. The Salto Ángel plunges 979 meters into the depth, making it the highest waterfall in the world. 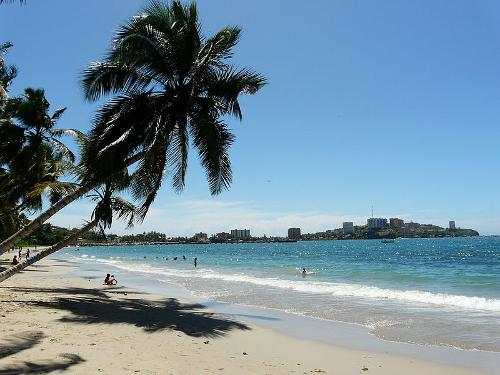 Off the Venezuelan coast lie 72 mostly small, uninhabited coral islands that together form the Dependencias Federales. The largest and best known is the tourist island of Isla Margarita, which together with two other islands form the state of Nueva Esparta. Since 1889 Venezuela has claimed the area in Guyana west of the Río Essequibo, commonly referred to as “zona en reclamación”.