Micronesia (from the Greek: small islands) consists of approximately 2300 large and small islands. The islands are scattered in the Western Pacific between Hawaii (approx. 6000 km) and the Philippines (approx. 2400 km). Geographically, Micronesia consists of four archipelagos: the Marshall Islands, the Mariana Islands, the Gilbert Islands and the Caroline Islands. Kiribati, which is part of Micronesia, also includes the Line Islands and Phoenix Islands, which are part of Polynesia. The distance from north to south is 2572 km and from east to west 5056 km. This means that the islands are spread over a water area of more than 13 million km2. 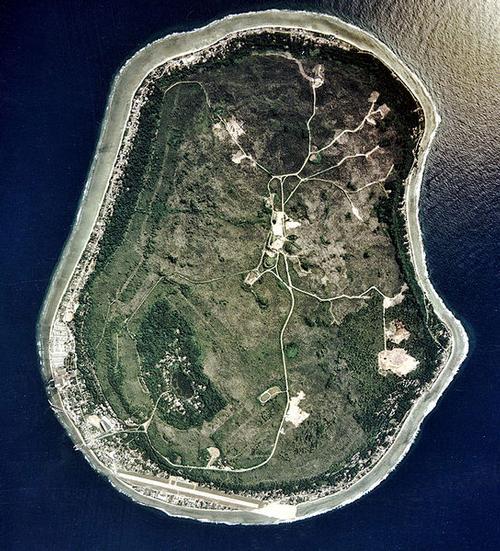 Nauru or Naoero (officially: Republic of Nauru) is the smallest republic in the world and is located in the Western Pacific north-east of the island of New Guinea and south of the Marshall Islands. The nearest neighbouring island is Banaba, which is approximately 250 km away and belongs to Kiribati. Nauru is 4000 kilometres from Sydney in Australia, 4160 kilometres from Honolulu in Hawaii and 4800 kilometres from Tokyo in Japan. The total land area of Nauru is 21.3 km2. Nauru belongs to the continent of Oceania.

Nauru is an oval-shaped atoll, surrounded by a reef that is dry at low tide and steeply sloping on the sea side. Inland, the reef gives way to a sandy beach, after which the bottom gradually rises and gives way to a 100-250 m wide fertile strip of land around the entire island. Within this strip is a coral rock 63 metres high, the highest point on the island, on which there is a vast phosphate-rich plateau. This plateau is characterised by a sea of white coral peaks up to 15 metres high. This landscape was created because the phosphate was removed from between the coral, leaving the coral tops.