Kiribati, belonging to Micronesia, also includes the Line and Phoenix Islands which are included in Polynesia. The distance from north to south is 2572 km and from east to west 5056 km. This means that the islands are spread over a water area of more than 13 million km2.

Kiribati (officially: Republic of Kiribati; Kiribatic: Ribaberikin Kiribati), is an independent republic within the British Commonwealth and located in the western Pacific. The islands are spread over 3.5 million km2 of ocean. From east to west, Kiribati stretches 3870 km, and from north to south 2050 km. Kiribati includes three island groups and Banaba (5 km2), which is also called Ocean Island. Kiribati belongs to the continent of Oceania. 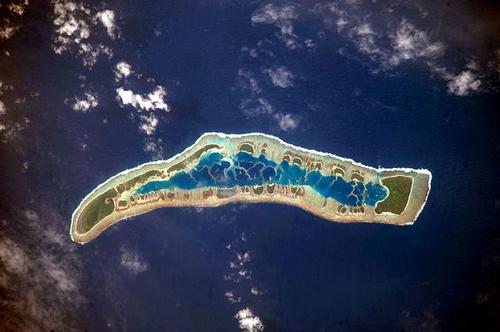 The total land area of Kiribati is 811 km2. The island groups are: the Gilberts or Tungaru (16 islands), 295 km2; the Phoenix Islands (8), 55 km2 and the Line Islands (including Kiritimati, formerly Christmas Island; 8 of the 11 islands are inhabited), 362 km2. The main island is Tarawa (Gilberts Islands) and the capital is Bairiki.

Except for Banaba, all islands are coral islands that are only 1 to 3 m above the high tide line. The highest point in Kiribati, at 81 metres above sea level, is on Banaba. Banaba is one of the three largest phosphate islands in the Pacific along with Nauru and Makatea in French Polynesia.

The Gilbert Islands consist of:

Most of the eight Phoenix Islands, all located south of the equator, were added to the Gilbert & Ellice Islands in 1937. Only the island of Kanta is inhabited with about 33 inhabitants. The rest of the islands are uninhabited. The Phoenix Islands are difficult to reach, only by boat.

The westernmost group of islands in Kiribati are the Line Islands. The northern islands of Washington, Fanning and Christmas Island are inhabited. The five islands south of the equator are uninhabited, mainly due to a lack of fresh water. The population of the inhabited islands is growing rapidly, especially the number of people on South Tarawa. Since 1988, residents of South Tarawa may be required to move to other islands (particularly Kiritimati).

The Line Islands cover about 60% of Kiribati's surface area, but the number of inhabitants is only about 7% of the total population. A direct flight from Honolulu to Christmas Island leaves the development of Washington and Fanning far behind. The three inhabited islands all have a different climate: Christmas Island is quite dry, Washington is quite wet and Fanning is just in between.

In 1996, the date line running through Kiribati was moved from the 180th to the 130th meridian, so that the same date applies throughout the country. Kiribati is now the country where a new day begins first. Kiribati was therefore also the first country that could celebrate the millennium, and Caroline Island, which is now called Millennium Island, was the first piece of land that could celebrate the millennium. Unfortunately, Caroline Island is uninhabited.