Micronesia (from the Greek: small islands) consists of approximately 2300 large and small islands. The islands are scattered in the Western Pacific between Hawaii (approx. 6000 km) and the Philippines (approx. 2400 km). 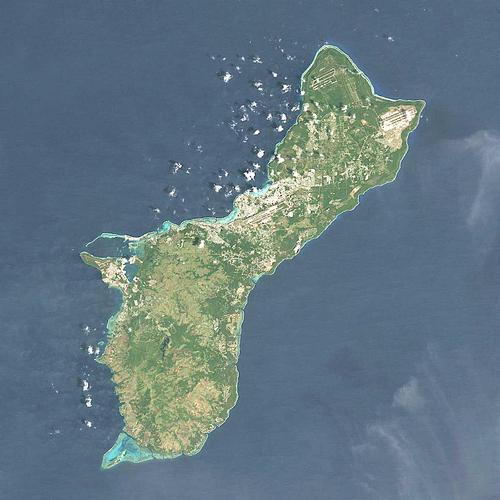 Geographically, Micronesia consists of four archipelagos: the Marshall Islands, the Mariana Islands, the Gilbert Islands and the Caroline Islands. Kiribati, which is part of Micronesia, also includes the Line Islands and Phoenix Islands, which are part of Polynesia. The distance from north to south is 2572 km and from east to west 5056 km. This means that the islands are spread over a water area of more than 13 million km2.

The total land area of Guam is 541 km2 and the island is approximately 48 km long and 15 km wide. In the middle, Guam is only 6.5 km wide and therefore looks a bit like a bow tie when seen from above. Guam is about 6000 km from Honolulu in Hawaii and about 2400 km from the capital of the Philippines, Manila. 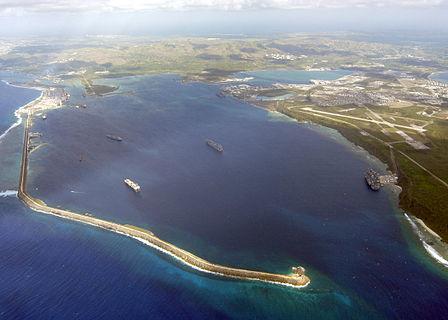 Aerial view from Mount Lamalam of Apra Harbor, GuamPhoto: Amanderson2 CC BY 2.0 no changes made

The north of Guam consists of an elevated limestone plateau, sometimes with high steep cliffs. The south is a mix of high volcanic hills and valleys with many small rivers and waterfalls. Guam's highest point is Mount Lamlam at 406 metres. Reef formations surround most of Guam. In the west and east you will find beaches. The southernmost tip of the island has a number of protected bays. In 1993, Guam was hit by a rare earthquake measuring 8.2 on the Richter scale.