The Cayman Islands are a British overseas territory and are located south of Cuba in the Caribbean Sea. The Cayman Islands archipelago consists of the three islands of Grand Cayman, Cayman Brac and Little Caymen. The last two are also known as the Sister Islands and are located about 150 kilometres northeast of Grand Cayman. Between the two sister islands lies an 11 kilometre wide strait. 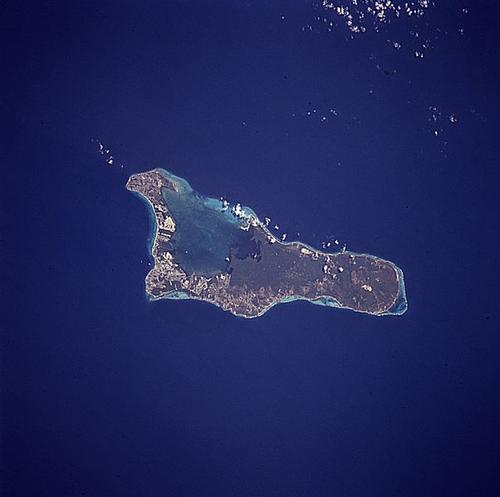 Off the coast of the Cayman Islands lie many coral reefs in the crystal-clear Caribbean Sea. They form an 'underwater wonderland', where divers from all over the world enjoy the beauty of multi-coloured fish. The tops of some coral reefs reach just below the water's surface, while others lie at a depth of no less than 6 kilometres.

All islands have an elongated shape. Cayman Brac also rises to a height of 50 metres in an easterly direction. In contrast, Grand Cayman and Little Cayman are mainly flat. All three islands are the summits of a mountain range that lies on the seabed. Because the subsoil consists of limestone, there are no rivers. 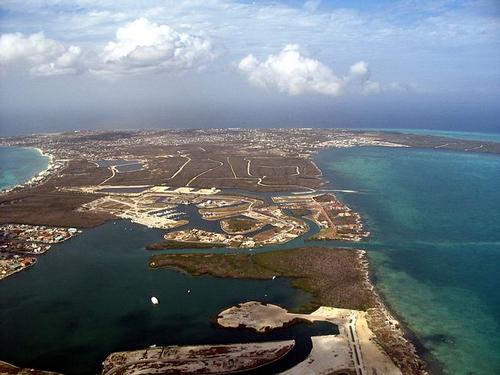 On the coast there are several white sandy beaches. East of Georgetown and the airport is the large lagoon North Sound, which has an open connection to the sea. A large sandbank lies under water in the sea mouth. In the future, this sandbank will probably grow, so that the lagoon will separate from the sea and an inland lake will arise.

The Cayman Islands have a tropical climate. The average temperature varies between 25 and 30 degrees throughout the year. The rainy season runs from May to October, but even then the sun comes out quickly after a heavy shower. From September to November, the islands are occasionally hit by hurricanes.

The limestone soil on the three islands is very porous and thus difficult to retain water. Nevertheless, many different species of plants, trees and flowers grow there. In the Queen Elizabeth II Botanical Garden on Grand Cayman, you can see a large collection of the local vegetation. In the Brac Parrot Reserve, you can also see 38 species of trees. Common species on the Cayman Islands are the pine, coconut palm and the orchid.

There are only about 400 Cayman-Brac parrots left, a species threatened with extinction.

Another rare bird species found on the islands is the West Indian Velvet Duck. Many migratory birds also stop over in the Cayman Islands. In the Booby Pond Nature Reserve on Little Cayman, you can see the strangest birds. For example, a lot of frigate birds breed there.

Iguanas live on all islands and thanks to their camouflage they are hardly noticeable against the background of grey rocks. The Queen Elizabeth II Botanical Garden has set up a breeding programme for the endangered Cayman Blue Iguana.

Perhaps the most extraordinary form of natural beauty is the marine life around the Cayman Islands. Around the coral reefs in the crystal-clear Caribbean Sea, the multicoloured coral fish are teeming. You can also admire anemones and rare coral species. Other common water inhabitants are the blue marlin, tarpon, dolphin, bonefish, barracuda and kingfish. Also famous is "Stingray City", an underwater area located on the sandbank at the mouth of the North Sound lagoon. Domestic stingrays live here and eat out of the hands of snorkellers