Italy's Parliament is located in the Palazzo MontecitorioPhoto: Manfred Heyde CC 3.0 Unported no changes made

The Italian Parliament consists of a Chamber of Deputies (Camera dei Deputati) with 630 members and a Senate (Senato) with 315 members. In theory, Italians can go to the polls every five years to elect the representatives of the parliament and of the regional councils. In practice, early elections often take place in Italy.

The president has a seven-year term and is elected by a joint session of the two houses supplemented by three representatives from each regional council. The president has the right to dissolve the parliament and appoint the prime ministers. After his term of office, he automatically becomes a member of the Senate for life. The President of the Senate is a deputy to the President.

Cabinets last only about 11 months on average after World War II. For more about the political situation see the chapter about History. 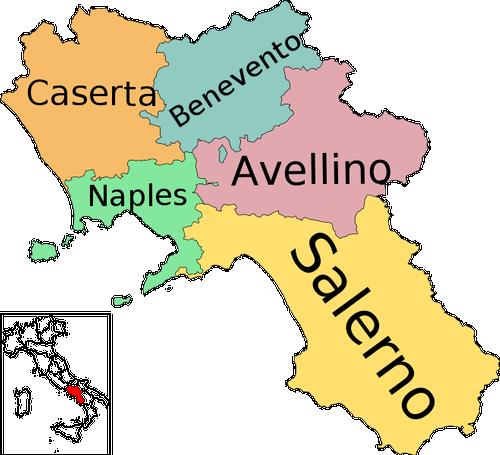 There are 20 regioni (regions), which are subdivided into 95 provinces and 8091 municipalities (comuni). These administrative units are governed by councils, which are elected every five years, and an executive body. The executive body is accountable to the board.

Five regions (Sicily, Sardinia, Aosta Valley, Trentino-Alto Adige and Friuli-Venezia Giulia) have a certain degree of autonomy (regioni a statuto Speciale), due to the fact that they are either islands or they border other countries .

The largest region is Sicily, the smallest Aosta Valley.

Below is an overview of the 20 regions with their respective capital: 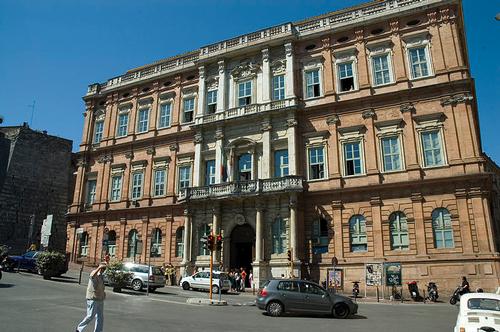 Pre-school education for 3 to 5 year olds is not compulsory. Education in public and private schools is generally paid for by the state. The public institutions are all state-owned.

Primary education is aimed at children aged six to eleven and consists of two cycles, one of two years and one of three years. The students automatically transfer from the first to the second cycle.

After five years of primary education, pupils take the exams for the diploma that gives access to lower secondary education.

Secondary education is for pupils aged eleven to fourteen and consists of three classes that form a complete study cycle.

All schools after compulsory education fall under upper secondary education and can be divided into the following categories:

Classical and scientific courses (scuole di tipo classico): the "liceo classico" and the "liceo scientifico" prepare students for university and other forms of higher education.

Vocational training: five years divided into a three-year qualification cycle and a two-year follow-up cycle, at the end of which one can transfer to higher education.

A "diploma universitario" after two or three years of study

A "diploma di laurea", after four or six years of study 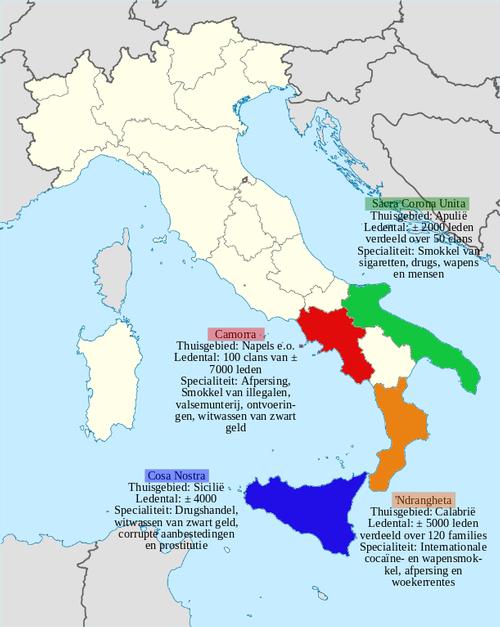 The mafia (Sicilian, from the Arabic afah = protection; Italian: mafia), is a collective name for secret, network-like organizations that were created in Western Sicily at the beginning of the 19th century and that operate in a violent manner. The members of those organizations are called mafiosi. The word mafioso was first used in 1863. The ambivalent relationships that the mafia has with representatives of the government (fighting them on the one hand, and cooperating with them on the other) sets them apart from other criminal organizations. In Naples the secret crime organization is called camorra, in Calabria 'ndrangheta and in Sicily Cosa Nostra. In the 20th century, around 1900, a mafia also emerged in the United States, also called Cosa Nostra, with many descendants of Sicilian immigrants.

The mafia has developed in Sicily mainly around Palermo, an area rich in large estates (latifundia). The mafiosi took the place of the landowners residing in Palermo and behaved like overseers and big tenants. They maintained intensive contacts with the landlords in the city. In return for securing their estates and later also for support in elections, the landlords offered the mafia protection against the government.

The mafia as one organization, with one central management, has never actually existed. The networks of local organizations, called cosche (plural of cosca, artichoke; the members of the local mafias are symbolized by the leaves of the artichoke), each controlled one particular territory and interacted with each other in all kinds of ways and through all kinds of organizations. They also fought each other to the death.

Both in Italy and in the United States, attempts by the government to combat the mafia were initially unsuccessful. Over the years, a series of anti-mafia laws came into force in Italy, which had little effect due to the lack of willingness by the local authorities to cooperate . Subsequently, a permanent parliamentary committee was set up by the government, which was to supervise compliance with these laws. After the murder of General Dalla Chiesa, prefect of Palermo, in 1982, a High Commissioner was appointed to coordinate the fight against the mafia. However, the first successes were not achieved until 1986 with the arrest in the United States of Tommaso Buscetta, the main “boss” of the Sicilian mafia. Hundreds of arrests were then made, followed by mass trials, including in Palermo. However, many convicts were soon released, probably because of the mafia's links with high political and judicial authorities. The murders of Mafia fighters and judges Giovanni Falcone and his successor Paolo Borsellino in 1992 gave new impetus to the fight against the mafia. In total, eleven mafia judges have been murdered so far.

Thanks to the cooperation of many Mafia members (pentiti = repentants) who received freedom from punishment and protection in exchange for their statements, the leaders of the organization could also be arrested, such as the big boss in Sicily, Salvatore (Totò) Riina and the The Mafia's second man, Nitto Santapaolo. Riina was sentenced to life in March 1995. At the end of 1992, there were already more than four hundred of these repentants. The efforts of the Milan prosecutor led by the prosecutor Antonio di Pietro revealed the links between organized crime, politics and business. All this dealt heavy blows to the mafia, but it in no way meant that the organization had been wiped out. Even re-elected President Silvio Berlusconi in 2001 is suspected of having close links with organized crime. From 1973, for example, a certain Vittorio Mangano worked on one of Berlusconi's estates, who had strong links with the Sicilian mafia.

The mafia bosses now rule in silence. Drug trafficking and extortion are still the order of the day. The highest boss of the Cosa Nostra at the moment is Matteo Messina Denaro (1962), a fugitive since 1993, who succeeds Bernardo Provenzano (1933), who was arrested in April 2006. 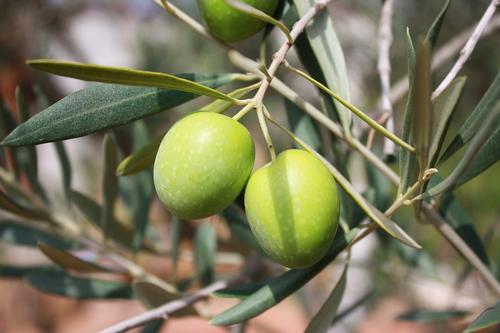 Agriculture produces grain, tobacco, olives, fruit and wine. In addition to fish, sponges and coral are also obtained from the sea (Torre del Greco). Naples and Salerno are major industrial cities where the following items are produced:

Many people work in the petrochemical and electrical industry

Electricity is generated in hydro and geothermal power plants.