Serbia comprises the autonomous regions of Kosovo (Albanian: Kosova; Serbian: Kosovo-Metohija) (10,887 km2) in the southwest and Vojvodina (21,506 km2) in the north. 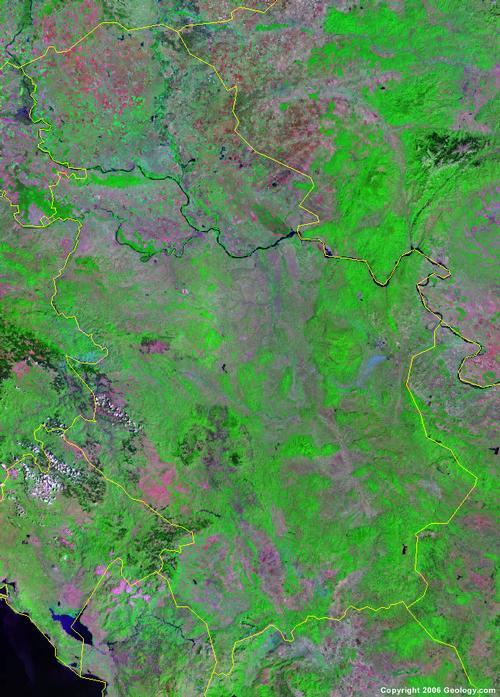 The Vojvodina comprises the northern part of Serbia and has the Sava and the Danube as its southern border with the rest of Serbia. The area is mostly flat and is known as the breadbasket of Serbia, with the exception of an eighty kilometer long forest area, Fruška Gora. The highest point here is Crveni Cot (539 m).

The Vojvodina can be divided into three geographical and historical areas: the Backa in the northwest (with the Tisa as the eastern border and the Danube as the southern border), the Banat in the east and Syrmia (Srem) in the southwest.

The flat landscape of Vojvodina belongs to the Pannonian Plain, a large plain in Central and Southeastern Europe, which arose when the Pannonian Sea dried up in the Pliocene. A layer of loess was later deposited on this, so that the area, although there is little precipitation, is generally very fertile. The Great Hungarian Land Plain (Alföld) forms the core of the Pannonian Plain. The Danube roughly splits the area in half and it is enclosed by the Alps, the Dinaric Alps and especially the Carpathians. Striking in this area are vast sand plains, in particular the Deliblato Sand Plain, which extends as far as the capital Belgrade. The sand plains are remnants of a dune area.

South of this, towards the Kosovar border, the landscape becomes more and more mountainous.

Two-thirds of the south is surrounded by mountains: the Dinaric Alps in the west, the Šar and Prokletije mountain ranges reaching into Kosovo and the Stara Planina in the east. The highest mountains are in Kosovo, with the highest peak being Ðeravica (2656 m), near the border with Albania and Montenegro. The highest peak in the Serbian part of the country is the Midžor (2169 m) in the Stara Planina mountain range, on the border with Bulgaria.

Serbia's rivers belong to three distinct drainage systems: those of the Adriatic Sea, the Black Sea, and the Aegean Sea. Three rivers are navigable, but by far the most important river is the Danube, which flows 558 km through Serbia and flows into the Black Sea. Important tributaries of the Danube are the Sava, the Tisa and the Morava.