The 1961 Constitution states that Venezuela is a presidential federal republic. Executive power is vested in the President, directly elected for a term of five years, who is also Commander in Chief of the Armed Forces;he is not eligible for re-election during the first ten years after the end of his term of office. The members of the Council of Ministers are appointed by the President.
Legislative power rests with Congress, which consists of a Senate and a Chamber of Deputies. The Senate consists of 52 members, 2 members per state, while all former presidents are also members. The Chamber of Deputies consists of 165 members, elected for five years; at least 2 members per state. All citizens of eighteen years and older have the right to vote (compulsory voting). 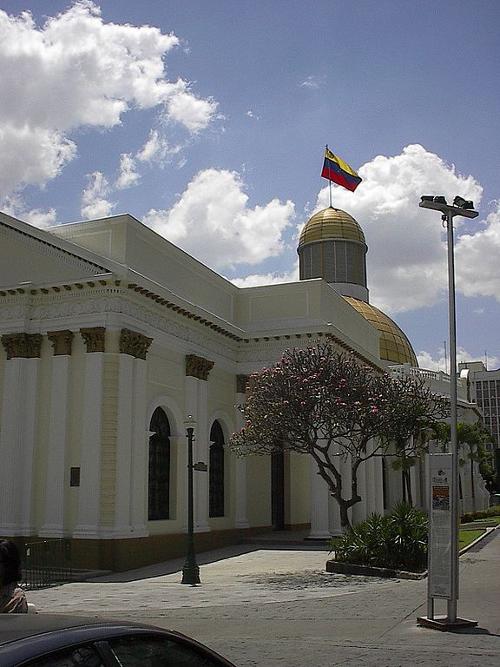 National Assembly of VenezuelaPhoto: Saravask CC 2.0 Generic no changes made

Administratively, Venezuela is divided into a Distrito Federal (the capital), twenty states (estados) and two federal territories (territorios federales);the 72 small islands in the Caribbean Sea are directly administered by the Ministry of the Interior (dependencias federales). The federal states, with limited autonomy, are governed by a governor appointed by the president;they have their own legislation and executive power. Venezuela has a total of 293 municipalities within its borders. Direct elections for governors were held for the first time in December 1989. For the current political situation see chapter history.

Public primary and secondary education is free in Venezuela. In fact, the state pays a monthly amount to all students, the "beca". Among other things, one can pay for school supplies and food. The quality of public education is not very high. Especially among secondary school teachers there are many who function poorly. The private secondary schools, “lyceos”, have a higher level, but are not affordable for most Venezuelans. however flawed that is sometimes. Library of the Central University of VenezuelaPhoto: Wilfredor in the public domain

On the negative side, in 1992, 50% of children did not complete primary school, although primary education is compulsory from the age of seven and one must attend at least six years of education. It is estimated that there are around one million young people who have not completed school education and therefore find it very difficult to find a job. The number of people who can read and write is between 85 and 90%. There are currently about 10,000 primary schools, about 700 secondary schools and 31 universities. Secondary school lasts four years, possibly followed by a preparatory year for university education. The oldest university is the Universidad Central de Venezuela in Caracas, founded in 1725, followed by the Universidad de los Andes in Mérida, founded 1785.
When the oil industry was still running at full speed and generated a lot of income, there was a scholarship system that allowed many students to study abroad.