Indonesia formed a federation at the start of its independence, but this form of government was soon converted into a unified state, the "Republik Indonesia".

Indonesia is a republic with a presidential system, with executive power vested in the president and ministers. Ministers are appointed by the president and are accountable to him alone. The president and vice president are elected for five years, starting in 2004 by direct elections, and are eligible for re-election thereafter (for example, President Suharto has ruled for five full terms). He or she has the right of veto over bills ("Keputusan Presiden") and has great powers of attorney, notably because he or she can declare a state of emergency across the country and is also the commander-in-chief of the military.

Legislative power rests with the 500-member parliament (Dewan Perwakilan Rakyat or DPR). Of these MPs, 400 are directly elected by the people and 100 are appointed by the president. After 2004, these appointed seats for police and military will be discontinued. 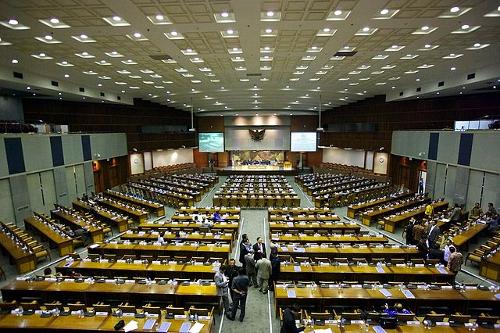 The highest body is the elected People's Consultative Congress (Malayis Permusyawaratan Rakyat), which has been made up of 700 members since 1999 and is composed of members of parliament and representatives of regional and professional groups; it meets at least every five years, sets political guidelines and elects the president. After 2004, the council will consist only of members of the House of Representatives and the Regional Representatives Council, who will be elected in the 2004 general election. The expectation is that the MPR will hold more frequent meetings and play a more active role in the economic and political policy of the government. For the current political situation see chapter history.

The country is divided into 24 provinces (propinsi) and three so-called special areas (daerahs): Jakarta Raya, Yogyakarta and Aceh (Aceh). These three areas all have a special form of government. The former East Timor province declared its independence in 1999.

The provinces are administered by governors ("gubernur") who are appointed by the president and are accountable to him or her. The governor has some leeway in education, religion and "adat" or customary law.

The Indonesian education system is quite simple in design. Importantly, the Japanese occupier put an end to the coexistence of diverse school types for different ethnic groups. Six-class primary school was introduced instead. 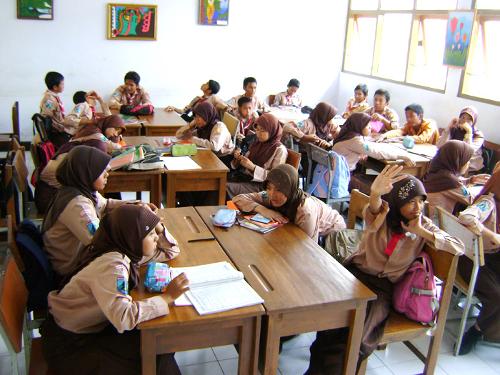 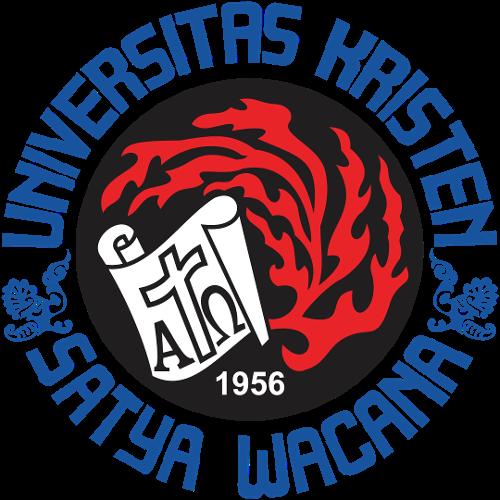 Health care in Indonesia has improved considerably in recent decades, but still not at an adequate level. For example, in 1999 there were only 0.6 beds per thousand inhabitants and no more than 0.2 doctors per thousand inhabitants.
The progress can mainly be seen in the decreased infant mortality and higher average life expectancy. Infant mortality fell from 89.5 per thousand live births to 38 in 2002. Average life expectancy increased from 46 years to 69 years in 2003, 66.5 years for men and 71.5 years for women. 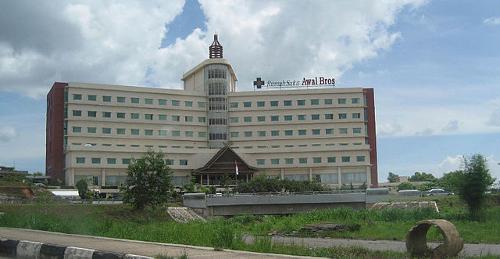 Much attention has been paid to expanding hospital capacity in the countryside. The number of public health centers increased from 1,250 to more than 7,000 from the early 1970s. First aid and mobile health centers are now close to 30,000. Furthermore, great emphasis is placed on prevention and on improving nutrition and drinking water.

In the music world, the gamelan is considered one of the most highly developed musical art forms in the world. Gamelan orchestras often provide the musical accompaniment to dance and theater performances.

The name gamelan is derived from "gamel", an Old Javanese word for handle or hammer, because most of the instruments of a gamelan orchestra are percussion instruments. The Indonesian term "karawitan" is the collective name for both Javanese and Balinese gamelan music. A gamelan orchestra can consist of five to 40 instruments, including "rebab" (two-string lute), "suling" (bamboo flute), "kendhang" (wooden drum), "bonang", "gender" and "gambang" (xylophone). 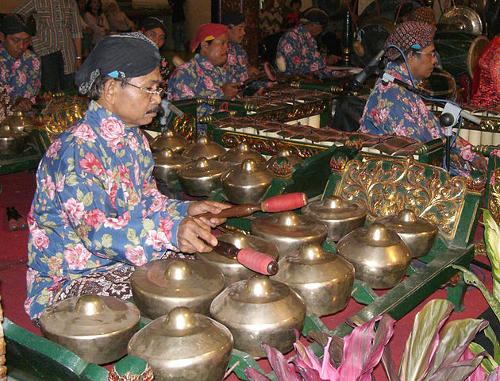 Bronze, brass and iron percussion instruments date back to prehistoric times, when the first gamelan orchestra was created is not clear. The heart of gamelan music is formed by the large bronze gongs, which can be heard from miles away.

Since the 19th century there have also been vocals, especially female ("pesinden"), in gamelan. The lyrics of the hymns are written in an archaic or literary language and therefore difficult to understand even for Indonesians. No sheet music is used, but most of the compositions or "gendhing" are accurately recorded.

Balinese gamelan music is very different from Javanese. The Balinese form has shrill tones and lively rhythms, the Javanese form, on the other hand, has slow, measured sounds.

Batik (meaning "to draw with wax") is a recessing and embellishing technique for textiles that most likely dates back to the Hindu-Javanese period, but did not reach its peak until the 16th century. Each region has its own motifs, its own range of colors and its own style.

The method is as follows: with liquid wax, patterns are applied to a white cloth or "mori", after which the fabric is immersed in cold dye baths. The fabric then takes on the color of the bath in those areas where no wax has been applied. The fabric is dyed through and after processing the pattern is visible from both the front and the back. The oldest colors in use are indigo blue and "soga, a brown color, which was the most popular court color until 1700. Nowadays these colors are no longer vegetable but chemically composed.

In Java, a distinction is still made between "batik tulis" and "batik cap" (pronounce: tjap). With the labor-intensive and therefore expensive batik tulis, one writes, as it were, the wax, with the help of a copper container with a spout, or "canting", on the fabric. A single garment can carry hundreds of different patterns. With batik cap the motifs are applied with a wooden or copper stamp. With batik cap the pattern is repeated over and over and it is the most used method. The advent of the batik cap revived the batik industry at the end of the 19th century. The mass production allowed everyone to afford batik fabrics and the export of batik from Java to the outlying areas started. Batik tulis is done by women, the batik cap technique requires much more strength, and is therefore mainly done by men. 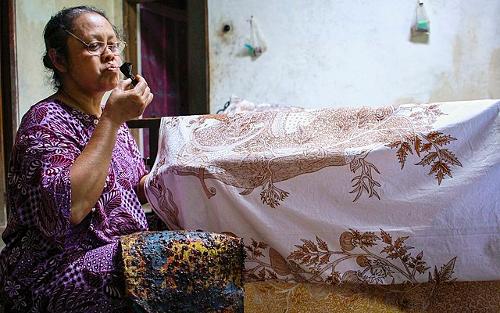 Nowadays there are also many machine-printed batik fabrics ("batik cetak") for sale, which are bought en masse by tourists. Known locally as Kota Batik ("Batik City"), Pekalongan in Java is an important textile center for the colorful hand-crafted batik with regional patterns. After Yogyakarta and Solo, most batik is produced here. Pekalongan even has a batik museum.

Solo is a highly regarded center of batik production. The Solonese style batik motifs with their somber classic colors are more traditional and differ significantly from Yogyakarta.

Cirebon has a distinct style with its cloud motifs inspired by Chinese examples in bright blue or red, or the rock gardens with elephants and deer of the Suniaragi pleasure garden. The Sundanese batiks show large fringe motifs of birds with long tail feathers between reeds or bamboo, against a plain background. North coast batik has been heavily influenced by the tastes of Chinese and European ladies.

In a narrower sense, a wayang (meaning "shadow" or "ghost") is a flat or round doll that is used in Java for a stage performance or puppetry. In a broader sense, by wayang is understood all those theater performances in which figures or stories from the wayang repertoire are depicted. This can be done by means of unmasked actors (wayang orang or wayang wong), by means of human actors with masks on (wayang topèng), with flat buffalo dolls (wayang kulit) or with round wooden puppets (wayang golèk). The lyrics are usually in Javanese or Sundanese, sometimes in Indonesian. The songs are sung in Kawi or Old Javanese.

Wayang puppets are beautiful expressions of Javanese art. They are not real images of people, but shadow puppets that show the human figure as well as possible in the flat surface. The largest doll is sometimes a meter long, the smallest never less than 23 centimeters.

Wayang performances are given on the occasion or on the occasion of ceremonial and festive occasions and important social or domestic events, including to ward off evil. The philosophy is that when disaster is averted on stage, harmony in the world outside is guaranteed for a while.

Wajang originally only occurs in Java and Bali, but can also be found where Javanese have settled in colonies, such as in South Sumatra, South Borneo and Suriname. The shadow play with the leather dolls has spread further to Northern Malaysia and Southern Thailand. Balinese dolls are coarser and more natural, closer to the old wayang dolls. Javanese dolls have become more and more refined over the last two centuries.

In Java, the main type of wayang is the "wayang kulit", the shadow play with flat leather-carved puppets. This form draws its material from the "purwa" stage repertoire, which in turn derives its material from the two great epics Ramayana and Mahabharata, originally from Pre-India. The material is often so extensive that it is divided into dozens of episodes called "lakon". Each lakon is an independent story and one lakon is shown per performance. In a wayang kulit performance, the shadows of the puppets fall on a screen of white canvas, stretched in a wooden window. Above the puppeteer's head, the "dalang", hangs a special lamp (blèncong), often in the shape of the mythical sun bird Garuda. This used to be a copper oil lamp, now usually an electric pear. The dalang is accompanied by a gamelan orchestra. Every melody played by the orchestra has a symbolic meaning. An average dalang certainly has about a hundred dolls, often many more. The dalang is both lyricist, producer, main storyteller, conductor and director. 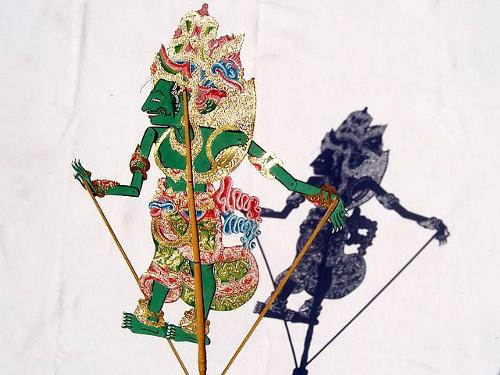 A wayang performance usually starts early in the evening and then lasts until the next morning. A lakon has three companies: from 9 pm to midnight, from midnight to 3 am and from 3 am to sunrise.

In West Java, the "wayang golèk" is very popular. This form is played with round, dressed stick puppets, which have rotating heads and movable limbs. Compared to the shadow play from Central and East Java, the mystical element in the wayang golèk is virtually absent, while the emphasis is on humor. The repertoire of the wayang golèk theater was strongly influenced by Islam. Wayang golèk is usually performed during the day so that one can see the beautiful colors well. 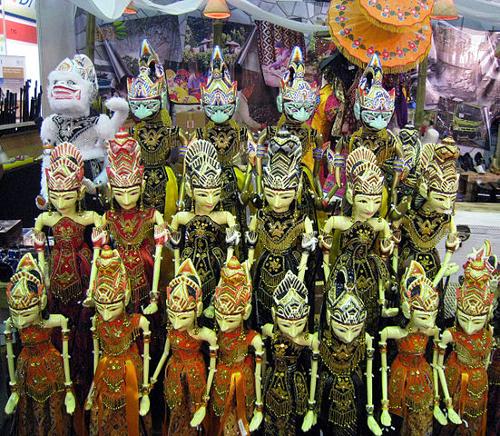 "Wayang krucil" is played with flat, painted wooden puppets, and is a kind of poor man's version of the shadow play. The puppets are smaller and the gamelan orchestra is limited to a few players.

In "wayang beber" an entire story is portrayed on a painted scroll. The dalang slowly turns the role painted with a wayang story in front of the audience, telling the story.

"Wajang Kelitek" uses flat wooden dolls and does not involve a screen. The stories originated in Java and take place in the East Javanese period. They are known under the name of Panji cycle and Damar Wulan cycle.

There are also two more forms in which human actors perform a story from the Panji cycle. In the case of "wajang topeng", this is done by masked dancers and the dalang acts as the narrator. At "wayang orang", also called "wayang wong", the dancers perform wayang purwa stories. The actors are not masked but only make-up and recite or sing their own text.
A relatively new form is the "wayang karya", which is much performed in Jakarta, with a large stage for the puppets.