Religion is very important in Indonesia. Belief in an almighty god is the first of the five principles of the Pancasila, the ideological guideline of the Indonesian government, and one of the main factors in promoting the unity of the people.

The constitution guarantees freedom of religion, but is limited to monotheistic religions; pantheism is allowed only when a supreme deity has been appointed. More than anywhere else in the world, religions from other countries have been accepted here and brought into line with ancient, original animistic traditions. 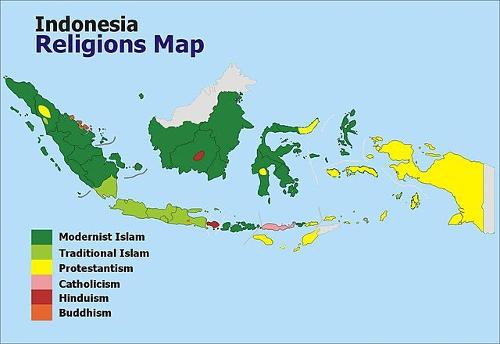 Approx. 90% of the Indonesian population adheres to the Sunni direction within Islam. This means that the largest Islamic community in the world lives on the Indonesian islands. Nevertheless, Islam is not a state religion, professors of the most diverse religions generally live peacefully side by side. About 10% are Christian (of which two-thirds are Protestant and one-third Roman Catholic), 5% adhere to local religions. Hinduism is predominant in Bali.

The main religion in Indonesia is Islam, which was introduced in the 13th and 14th centuries AD. First in Aceh and later in almost all coastal areas. Mystics spread the religion at the courts of the Hindu monarchs, Arab and Pre-Indian spice merchants among the common people. Islam was spread throughout the archipelago, especially by the Buginese, a people of seafarers and traders originally from South Sulawesi.

Java, where the majority of Muslims live, has two groups. The "Santri" is an Orthodox community that lives according to the Five Pillars of Islam. The other group, the "abangans", profess the so-called Javanese religion "agama java", a type of Hindu-Javanese mysticism, and are located in Central and East Java.

Orthodox Islam finds a lot of support in Sumatra, especially in the northern province of Aceh. In Kalimantan we find a mystically tinted Islam among the Malays along the coasts. On Sulawesi, it is the Buginese, Makassarese and Gorontalese who adhere to Islam.

Jakarta's Istiqlal Mosque has six floors and is the largest mosque in Southeast Asia and the second largest in the world. The gigantic white dome can be seen from a distance of 15 km and after Ramadan more than 200,000 worshipers gather here. It was one of the prestige projects of the former president Sukarno. 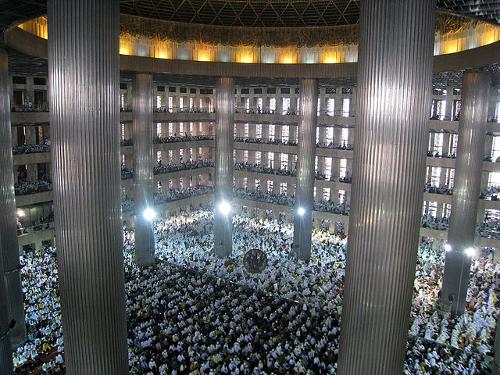 Hinduism in Bali (Agama Hindu Dharma or Agama Hindu Bali) is the second major religion in Indonesia. In Bali, this religion is practiced by more than 90% of the population.

This religion cannot be compared with Hinduism in India or with the old Hindu Javanese religion. Yet these two elements, along with Buddhism, form the basis of complex Hinduism in Bali.
The Agama Hindu Dharma, in which the belief in one supreme being is central, is based on five principles, the "panca srada":

1. Belief in "Sanghyang Widhi Wasa", the one and one God.
2. belief in "Atman", the eternal soul.
3. belief in "Kharma Pala", the law of cause and effect.
4. Belief in "Punarbhawa", or incarnation.
5. the belief in "Moksha", the union with the Eternal Spirit.

Traveling across Bali, the many statues and temples give the impression that many gods are worshiped and worshiped. In reality they are different manifestations of the "trimurti", the trinity: Brahma the creator, Wisnu the keeper and Siwa the destroyer. This trinity is united in one god: Sang Hyang Tunggal, the "Most High", who manifests in different ways. Hence, the many gods and goddesses are only certain aspects of the "Most High" or the "Only One."

The center of the faith is the "pura desa", in which Brahmin priests perform the principal ceremonies. In addition to these large temples, there are also many thousands of other temples, including mortuary temples, family temples and house temples on the residential areas.

In Bali there is always a temple party or religious ceremony somewhere. The highlight of the year is the great temple festival, the "odalan," which is celebrated in every village in memory of the foundation of the temple. When all feasts must take place is calculated on the basis of the Balinese calendar, which is based on the "wuku" or lunar year.

The most "spectacular" ceremony to see is the cremation or "ngaben". This event makes a cheerful impression, and that is because the person being cremated has often passed away months or years ago. By the combustion the soul of the deceased is liberated and heaven can be reached. 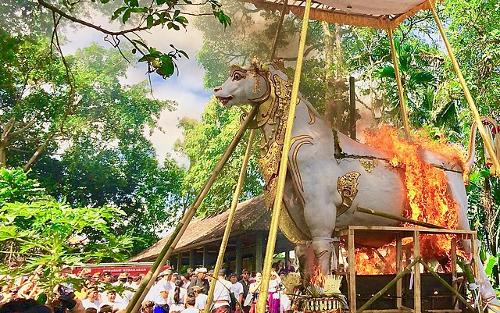 Ngaben ceremony is the Hindu funeral ritual of BaliPhoto:Yohana Afrita CC 4.0 International no changes made

The size of the towers depends on the closet and the wealth of the deceased. The tower represents the cosmos. The base is shaped like a turtle, wrapped by two snakes. Above it a platform has been made on which the body is placed, and is thus located between heaven and earth. Different rules apply to brahmins. They are cremated as soon as possible after death and are laid out in a bier shaped like a "padmasana" or lotus seat.

The differences with India are striking. In India these are simple ceremonies, but in Bali they are surrounded by a lot of ceremonial.

The Tenggerezen live around the Tengger Mountains in East Java. This isolated community calls their faith "agama buddha," a mixture of ancestor worship and Hindu Buddhist elements.

Pure Buddhism has few adherents in Indonesia. In Banjar, Bali, is the Brahmawihara Arama, a Buddhist monastery and meditation center inhabited by some Balinese Buddhist monks.

A revival of Buddhism experienced a revival in the 1930s. When the Europeans disappeared after independence, Indonesian Buddhism became an almost exclusively Chinese affair.

The Borobudur in Java is a gigantic Buddhist structure that cannot be compared to any other human creation. The construction required 56,600 m3 of stones, making Borobudur the largest "stupa" in the world and the largest historical monument in the southern hemisphere.

Borobudur's architecture also features Persian, Babylonian and Greek influences, and therefore has little in common with other Buddhist temples in Southeast Asia.

Its construction came about thanks to the Vajrayana sect of the Tantric school of Buddhism. The Saliendra princes had it built by farmers between 778 and 850. The Saliendras were overthrown in 856 and the structure soon fell into disrepair. Partly as a result of the many volcanic eruptions, the monument has been under a layer of earth for hundreds of years. In 1814 the Borobudur was discovered by an English colonel and in 1855 the building was cleared again. Only in 1973 was the restoration started.

About 8% of the population belongs to Christianity, which was not spread until the 19th century. In 1831 the Dutch Zendelingsgenootschap Protestantism began its missionary work, in 1846 the Catholic Church started. Christianity in Indonesia is concentrated in areas where Islam has never been able to penetrate for some reason.

The colonial government did act in a regulatory way. Ecclesiastical appointments required the approval of the civil authority, among other things, in order to rein in the mutual rivalry of the Christian denominations and thus prevent "double missions". The most striking example is Irian Jaya, the south of which fell to the Catholic mission and the north to the Protestant denominations. This pattern can also be found in other parts of Indonesia. 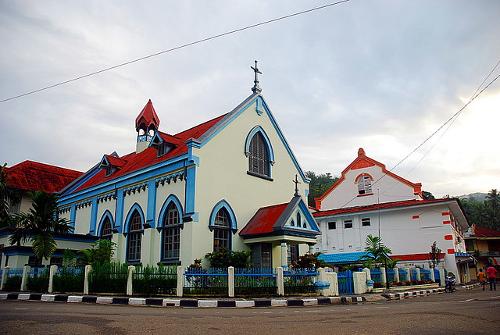 Flores, Southeast Moluccas, and West Kalimantan are important Catholic areas. Ambon and surroundings, Sumba, Tana Toraja, Minahasa and the Batak countries are strongholds of the Protestant churches. Mission and missions were kept outside strict Islamic regions such as Aceh, Minangkabau, Banten or Jambi.

The religion of many Chinese immigrants is a mixture of Buddhism, Confucianism and Taoism, and is called the 'Three Religions' or 'Sam Kauw Hwee', a name changed to Tri Dharma in 1963 as part of the Indonesianization campaign. term taken from Sanskrit. Tri Dharma can be considered a Chinese form of syncretism. Buddhism and Confucianism in China were mainly a matter for the social and religious upper class, while Taoism dominated the perception of the common people.
Because the Chinese migrants were mainly of humble peasant background, they brought this folk religion with them to the Indonesian archipelago. In addition to domestic temples, the gods and ancestors are also worshiped in larger Chinese temples or "klenteng". The following is greatest in the coastal regions of West Kalimantan and North Java. 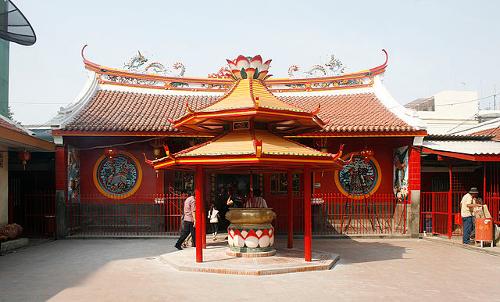 Despite the small number of official adherents, the significance of traditional religions cannot be neglected. Many Indonesians continue to value elements of the old folk beliefs, even after they have joined one of the "great" religions. There are great differences between the original religions, they have all gone through their own historical development. 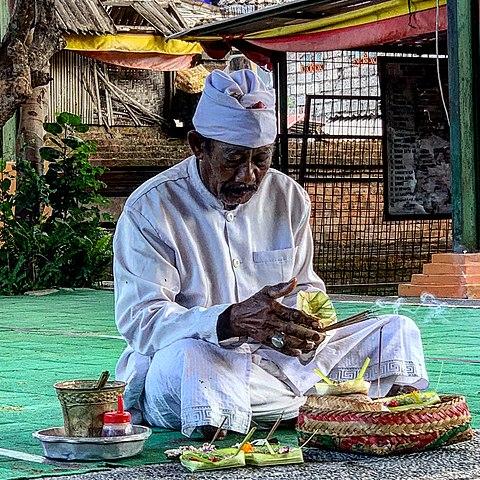 A Balinese Shaman prepares some offering to the godsPhoto:Franz-Josef Alayon Monsanto CC 4.0 International no changes made

A common element is animism, the belief that nature and man-made objects can be animated. Especially old trees, mountains, caves and springs are popular dwelling places of the spirits according to popular belief. Sometimes it concerns real nature spirits, but a deity or the spirits of the deceased can also live there.
Belief in an inspired nature goes hand in hand with ancestor worship, another common element in most of the original Indonesian religions. There is a general belief that the spirits of deceased people influence earthly existence. The soul of a deceased must therefore be surrounded with great care. During rituals, shamans ensure contact between the common people and the world of the spirits. These and other rituals are the cement of a traditional society.