India is a country of freedom of religion and there is a separation between church and state. The five major world religions are therefore amply represented: Hinduism, Buddhism, Islam, Christianity and Judaism.

Furthermore, India has Sikhism and Jainism, two religions that only occur in this country. One of the oldest religions in the world is also to be found in India, Mazdeism, the religion of the Parsis.

About 85% of the Indian population adheres to Hinduism, which means about a billion people. The framework for Hinduism are the four Vedas, religious texts written in Sanskrit. These Vedas were introduced c. 1000 BC. Hinduism is a very tolerant religion without dogmas, has no ecclesiastical organization, and has no founder. Hindus do adhere strongly to certain rules and customs. For example, the rigid caste system is still often applied and temples are only accessible to their own followers. 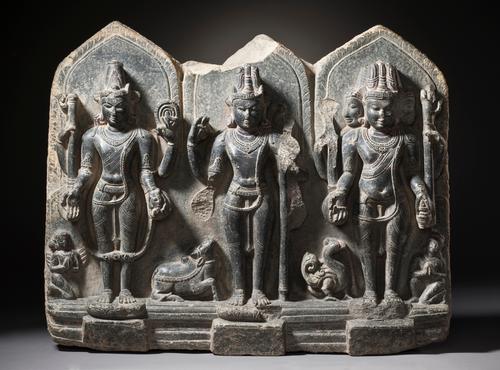 The main rationale in Hinduism is the belief in "samsara", the cycle of birth, life, death and rebirth or reincarnation. The law of "karma" then determines how you return to the next life. If you have closed your life positively, you will return to earth in a higher social rank. The ultimate goal is liberation from the cycle of rebirths. At the latest on his fifth birthday, people are included in the faith community by shaving the hair or "churakarma". Life ends with cremation or "antyeshtikarma".

Hinduism has many gods, but they are all manifestations of the three main gods, Brahma, Vishnu and Shiva. These three gods can be traced back to one principle: Brahman, symbol for the balanced cosmos, the All.

Brahma is the primal god and creator of the universe and the essence of things. He has four arms and four heads. The four Vedas are said to have come from the four mouths. The most famous Brahma temple is in Pushkar.

Vishnu is the god who protects life and maintains the cosmos. He has visited the earth in various, often animal, guises. His symbols are the shell and the discus and his vehicle is the "garuda", the mythical eagle. A popular form of Vishnu is Krishna, a youth playing the flute.

Shiva is both creator and destroyer. He has five faces, four arms and three eyes and, like Vishnu, has different manifestations. The companion of Shiva is Parvati, the goddess of the life force. The symbols of Shiva are the trident and the phallus or "lingam", the symbol of fertility. The followers of this god are the holy men or "sadhus".

Ganesh, the god of wisdom and prosperity, is the son of Shiva and Parvati. Ganesh has an elephant head and his vehicle is a mouse.

The founder of Buddhism is Sidharta Gautama (560-480 BC), who lived in what is now Nepal. At some point he came to understand that life is suffering, and it is characterized by illness, old age and death. He started living as an ascetic, but this did not bring him luck. Then he found out that the suffering is caused by the desire of man and his clinging to life. The solution was that man has to free himself from the cycle of birth, death and rebirth. Moderation became the magic word through which man can free himself and reach the state of bliss, the "nirvana". 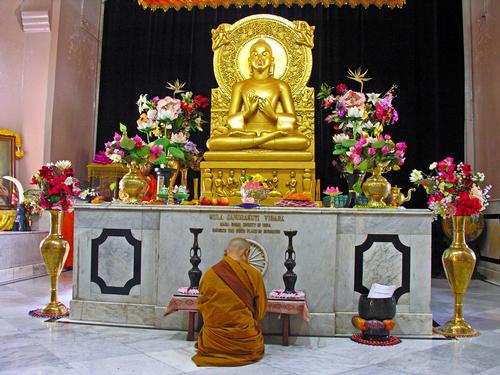 Buddhism has about seven million followers in India in the states of Sikkim and Maharashtra. Like Hinduism, Buddhism has no dogmas or ecclesiastical organization. Buddhism is more of a philosophy and attitude to life and has no gods, for example. In recent years, Buddhism has grown through the entry of "untouchables," the lowest caste, who are tired of the Hindu caste system.

The founder of Islam, Mohammed, was born in Mecca in the year 571. In 610, he had a divine vision in which the archangel Gabriel instructed him to spread the teaching of the one true god, Allah. After the death of Mohammed in 632, Islam spread at breakneck speed. India was attacked by Muslims from the 11th century and the Islamic Sultanate of Delhi was established in 1206. The peak of Muslim rule in India was the Mughal Empire (1526-1857). Due to the violent expressions of Islam, this religion soon clashed with Hinduism. The low point was the very violent division of India in 1947, when Islamic Pakistan separated from India.

(Sunni) Islam has about 120 million followers in India, making it the second religion in the country. It is noteworthy that India has more Muslim inhabitants than any Arab country. Most Muslims are located in Kashmir State.

The founder of Sikhism is the guru Nanak, who lived from 1469-1539. Sikhism has only one god, Hari, the creator of heaven and earth. Sikhism has no priests and has taken over things from both Hinduism and Islam, including reincarnation, cremation and karma. 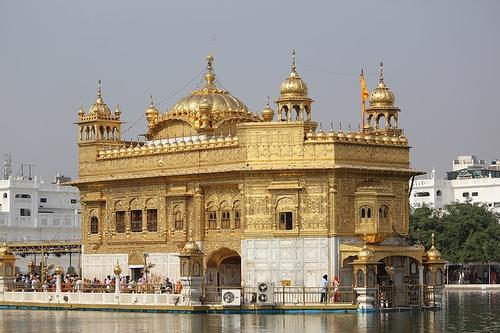 The most important temple for the Sikhs is the Golden Temple in Amritsar. Construction was started by Guru Arjun, who also recorded the teachings of Sikhism in a holy scripture, the "Granth Sahib". In response to Islam's persecution, a military organization, the Khalsa, was established. This marked the beginning of a long military tradition. From 1761 to 1849, the Sikhs had their own state, and in 1947 many Sikhs left Pakistan and settled in fertile Punjab. The Sikhs are currently striving for more autonomy or even independence.

Sikhism is the fourth religion in India with about 20 million followers. The Sikhs mainly live in the state of Punjab and the capital Delhi also has a large number of Sikhs.

Sikh men must have five "kakkars" or symbols introduced by Guru Gobind Singh to ensure that men would easily recognize each other as Sikh:

The founder of Jainism was Vardhamana, who lived in the 5th century BC. Jainism originated in the state of Bihar in response to the stiffening in Hinduism. The name Jainism comes from the nickname of Vardhamana, Jina (victor).

Jainism, like Buddhism, which also has no gods, is not a real religion, but rather a philosophical system and a code of conduct. Soul and matter play an important role in the life of a jaina. After all, matter can penetrate the soul and thus influence the karma of man, and thus influence his reincarnation. The purpose of Jainism is to free the soul from matter and to break the unwholesome cycle of rebirths. Whoever achieves that will be a "kevalin", a redeemed one. 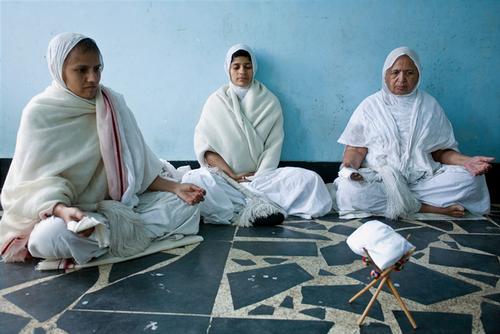 The gentle Jainas have a lot of respect for life. They are, of course, vegetarian, do not wear leather objects, and killing a living creature, even insects, is completely out of the question. In the first century AD. two movements emerged, the 'digambara' and the 'sivetambara'. The first rejected all matter and therefore walked around naked; the sivetambaraa are always dressed in white. Naked Jainas have disappeared from the streets.

The approximately 4 million Jainas mainly live in the metropolis of Mumbai and in the states of Gujarat, Maharashtra and Rajasthan. Gandhi was from Gujarat and was probably influenced by Jainism in his youth. Beautiful temples can be found in the Rajasthan cities of Jaisalmer and Ranakpur.

One of the oldest surviving religions in the world is Mazdeism, named after the god Ahura Mazda, the creator of heaven and earth and God of Light. The followers of this monotheistic religion are called parsis and the religion is known as parsism (the parsis are descended from Pars province in Persia). Mazdeism was adopted in the 6th century BC. founded by the prophet Zarathustra.

The symbol of Ahura Mazda is fire, and Ahriman, Lord of Darkness, is his eternal opponent. Man can positively influence the struggle between these two rivals through right words, thinking, and actions. The Avesta is the sacred scripture of the parsis.

Parsis worship Ahura Mazda in fire temples, where eternal fire is maintained. The dead are not buried or cremated, but are placed in the open air on "dakhma's" or Towers of Silence. The corpses are then eaten by vultures and birds of prey.

About 130,000 Parsis live in India, most of them in the Mumbai area in closed communities.

At the moment there are only about 5000 Jews living in a number of Indian cities. The most famous Jewish community is that of Kochi in Kerala state, which dates back to the sixth century BC. In recent years, many Jews have emigrated to Israel.

As early as the 1st century AD. the first Christians appeared in India. The real founder of Christianity in India is the Spanish Jesuit Francis Xavier, who arrived in the Portuguese colony of Goa in 1542. From Goa he undertook many mission trips through Asia.

The number of Roman Catholics consists of about 13 million persons and there is a Syrian Orthodox and a Latin movement.

Protestantism was introduced in the 17th and 18th centuries by Dutch and German missionaries, among others. There are currently about 5 million Protestants.

Most of the inhabitants of Ladakh are adherents of Lamaism; "Lama" is the name of the monks of this religion and means "standing above all things."

Lamaism is a special form of Buddhism that was introduced in Tibet around 650. The religion flourished in the mid-8th century under the influence of the guru Padma Sambhava and entered Ladakh in the 10th century.

After a period of decline, the Tibetan reformer Tsjongkhapa founded the sect of the Gelugspa around 1400, which is currently the most important movement within Lamaism. Because of its clothing, this sect is called "yellow hats", another sect are the "red hats". 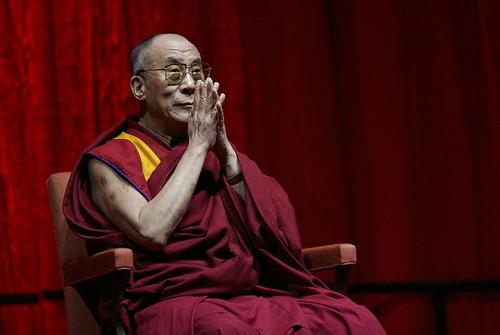 The yellow hats consider their highest priest, the Dalai Lama, as a reincarnation of the god-worshiped Avalokitesjvara. The principal Dalai lama was Ngagdbang-Lobsang (1617-1682). He was the fifth Dalai Lama and, in addition to spiritual authority, also gained worldly power over Tibet.

At the top of Lamaism is the Dalai Lama and the Panchen Rimpoche or Panchen Lama, who have only religious authority. After this come the Ashutuktu (bishops) and Lamas (teachers).

In 1959, China occupied Tibet and the Dalai Lama's secular power came to an end. He fled to India and founded an exile government, while the Panchen Lama was left in Tibet. The Dalai Lama travels around the world to publicize the Tibetan cause and find a political solution. He was awarded the Nobel Peace Prize in 1989 for these peaceful endeavors.