The population shows a great diversity in ethnic terms. There are two main groups: the Indians (Indo-Arians; approx. 72%) and the Melanids (Black Indians; approx. 25%); the former live in the Ganges plain, in Rajasthan and central Deccan, the latter in Southeast India (Tamil Nadu) and in the far northeast of Deccan. Wedoids live in the forests of Deccan. The Mongolians include many mountain peoples of the Himalayas and Northeast India.

In the course of the 20th century, a sharp decline in mortality has been recorded (estimated at 43 ‰ in 1911, 8.49 ‰ in 2002) as a result of better disease control and better, if not inadequate, famine control. stockpiling and building roads. The birth rate declined much less during this period (approx. 48 ‰ in 1911, approx. 23 ‰ in 2002). (Incidentally, the accuracy of the demographic figures is affected by the fact that many births and deaths are not recorded.) Strong population growth is one of the major problems facing the government. Since 1958, a lot of propaganda has been carried out by the government for birth control, especially in rural areas. This campaign intensified in the 1970s and also led to excesses (including forced sterilization). The campaign was relaxed after 1977. 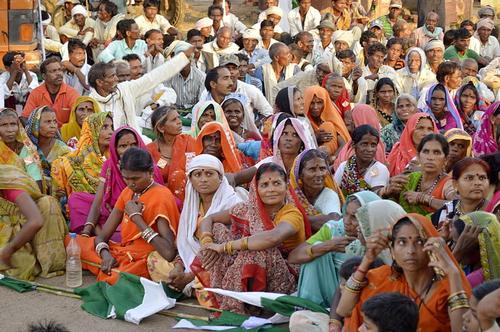 The distribution of the population is very uneven. Overall, India is densely populated, but regional differences in population density are wide. With a population density of approximately 390 inhabitants per square kilometer, the country is one of the most populous countries in the world. Densely populated are the Ganges and Brahmaputra plains (Uttar Pradesh, Bihar, West Bengal) and the states of Kerala and Tamil Nadu. Sparsely populated are the eastern mountain regions (Manipur, Meghalaya and Nagaland) and the arid regions (Rajasthan and Jammu and Kashmir). With a population of 150,000 and a population density of just over one inhabitant per km2, Ladakh is one of the least populated regions of India. Only about 33.5% of the population lived in cities in 2017, of which cities with more then a million inhabitants in particular have enormous housing problems.

In 2017, India had 1,281,935,911 inhabitants. Since May 11, 2000 at 8.44 in the morning, India officially had one billion inhabitants as the national census commission announced. India became, after China, the second country in the world where more than a billion people live. Largest cities (agglomerations) in 2017 are New Delhi (25.7 million), Mumbai (formerly Bombay 21 million inhabitants), Calcutta (11.8 million), Chennai (9.6 million) and Bangalore (10 million).

About 70 million Indians are still tribal. All these groups together are called Adivasi (original inhabitants). Today, India is home to more than 500 tribes who speak more than 40 languages and honor their ancient customs and religious practices. Most tribes live in the inaccessible densely forested areas of India, such as South Bihar, West Orissa, parts of Madhya Pradesh, the Andaman Islands and the Northeastern states.