India has a richly varied vegetation with about 15,000 species of plants. The vast forests that used to cover the Indian subcontinent have now largely disappeared due to the large-scale irresponsible logging of trees. Roughly a quarter of the total land area is covered with mainly scrubland instead.

Damp tropical forests occur between 450 and 1350 meter on the Western Ghats south of Bombay, and in Assam to an altitude of 900 meter. Where rainfall falls below 3000 mm, the humid tropical forest passes in dry tropical forest, which yields teak wood, among other things. Damar trees, sandalwood, reed, bamboo and date and coconut palms also grow here.

Extensive mangrove forests can be found along the sea coast and especially in Bengal. In addition, there are subtropical and temperate hill forests in the south (the Nilgiri and Palani Hills) and the north (the Himalaya). Between 1050 and 1500 meter in southern India, rainforest gives way to temperate wet forest. 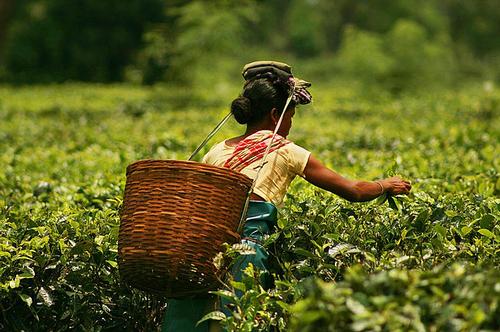 In the Himalayas, there is a difference between the wetter east and the drier west. While moist hill forest with evergreen oaks, chestnuts and various rhododendron species predominates to the east, subtropical pine trees more to the west and different types of conifers grow at higher altitudes. In the east, abundant rainfall allows for the cultivation of tea, and Assam is India's foremost tea producer.

Much of Rajasthan consists of treeless desert. Only strong, drought-resistant shrubs and smaller plants survive in these hot desert regions. Alpine vegetation occurs in the Himalayas.

The animal world of India is very rich due to the vastness of the country and its many climate zones: there are 400 species of mammals, 500 species of reptiles and amphibians, 1,200 bird species and 30,000 insect species. The fauna is generally Asian in character and belongs to the oriental area. Important large mammals are the Indian elephant and the Indian rhinoceros; Furthermore, tiger, panther, many deer species (including the large sambar deer and the tiny mouse deer), a wild bovine (gaur), some antelope species (Nile Gau, Indian antelope, four-horned antelope), and a number of monkey species. Wild goat and sheep species are still found in the mountains. 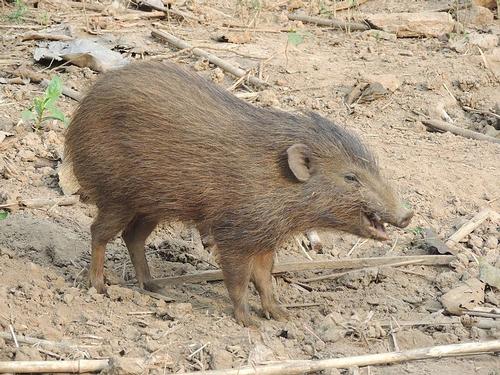 The pygmy pig is the world's smallest and rarest wild boar. It is threatened with extinction and there are only a few small, isolated, wild populations left. Today, the pygmy pig is only found in Assam's border area between Bhutan and Arunachal Pradesh. In fact, the only population of this species can be found in the Manas Tiger Reserve (Manas Wildlife Sanctuary) and the smaller Barnadi Wildlife Reserve (North West Assam) and nowhere else in the world. The dwarf pig is locally Nol Gahori or Takuri Borah in Assamese, Oma Takuri in Borean and Sano Banel in Nepali.

The bird world is also generally very rich, especially in fowl birds. The peacock is the national symbol of India. Cranes, storks, vultures and the black kite are ubiquitous. The plateau of Deccan and South India are home to the kingfisher and the remarkable hornbill. Bharatpur is the most important bird sanctuary in Asia. The park is home to 374 bird species, including 117 species of migratory birds. Parrots, kingfishers, woodpeckers, partridges, hawks, buzzards, owls and eagles live on the dry land; eighty species of ducks, seven species of storks, pelicans, cormorants, flamingos, ibises, herons and snake birds live in and around the ponds and marshes. The large Saras crane and the snow-white Siberian crane are special. Mammals that live here are the sambar deer, the nile gau, the mungo, a kind of civet, and the jackal. 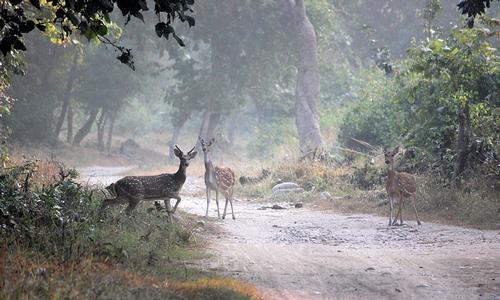 Corbett National Park is India's first game reserve, established in 1936. The river is home to the beak crocodile or gharial, the large swamp crocodile and river turtles. Wild boars, horse deer, black bears, chitals, deer, porcupines, rhesus monkeys and whelmen live on the land. Bird lovers will also get their money's worth, with the chance to see the black-necked stork, the Indian serpent eagle, the gray hornbill, the orange caterpillar and many waterfowl, pigeons, parakeets and kingfishers.

There are plenty of reptiles in India: the country is known for, among other things, the large number of venomous snakes and a related large number of snake bite deaths. Dangerous snakes are the cobra and the highly venomous krait. The gharial is striking, a fish-eating crocodile species that can grow up to six meters long. 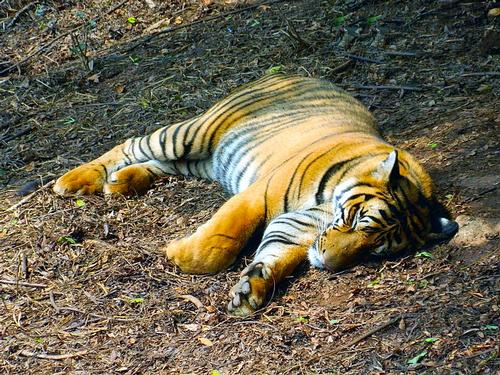 Due to the strong population pressure, land hunger and clear cut of the forest, the original animal world is threatened with extinction. A network of reserves has not always led to the desired result, because the reserved areas are often too small and fragmented. At present, many species are endangered in their survival in India: Indian lion, Bengal king tiger, Indian elephant, Indian rhinoceros, Nilgiritahr, some deer and antelope and dwarf pig.

The main reserves are Gir (Indian lion), Corbett NationalPark (tiger), Kanha National Park (deer and tiger) and Kaziranga National Park (Indian one-horned rhinoceros and elephant). In the northern state of Sikkim 4,000 plants grow, including many rare species. In the hills and mountains there are special animals such as the musk deer, the black bear, the endangered red panda and the very rare snow leopard. The hangul is a rare deer species found only in the Kashmir Valley and in isolated areas of the east. The Western Ghats are the natural habitat of the black langur. Herds of the Khur, the Indian wild donkey, live in the Thar Desert.