India (official Hindi name: Bharatiya Ganarajya, or abbreviated: Bharat, is a federated republic in South Asia and is located in the Indian subcontinent. India has an area of approximately 3.3 million km2. 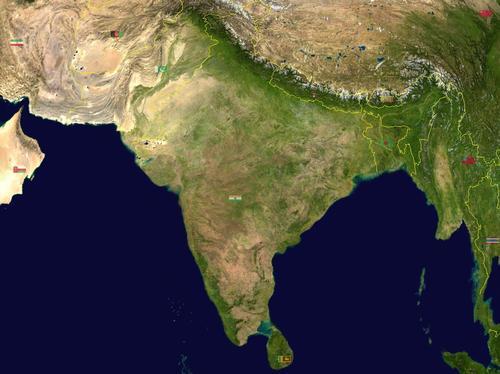 India is bordered to the north and northeast by Bangladesh (4053 km), Myanmar (1463 km), Bhutan (605 km), Nepal (1690 km), China (3380 km), and to the northwest by Pakistan (2912 km). India is sandwiched between the Bay of Bengal on the east, the Arabian Sea on the west and the Indian Ocean on the south. The total length of the coastline is approximately 7000 km. The distance from east to west is 2950 kilometers and from north to south 3250 kilometers. The territory of India also includes the Lakshadweep archipelago in the Arabian Sea and the Andaman and Nicobar Islands in the Bay of Bengal, more than 1,000 kilometers east of the mainland. In the far north are Jammu and Kashmir, over which territorial rights are claimed by both India and Pakistan.

Due to the many climate types and the size of the country, India has a huge variety of landscapes. India consists of three main areas: the Himalayas (Sanskrit: "land of snow"), the northern plain and the peninsula.

Northern India is dominated by the Himalayas, although only the western and eastern ends of this mountain range fall within the Indian borders. The Kanchenjunga (8,598 m) in Sikkim and the Nanda Devi (7,816 m) are the highest peaks in India. The Himalayas are bisected by beautiful valleys, such as the Kashmir valley. 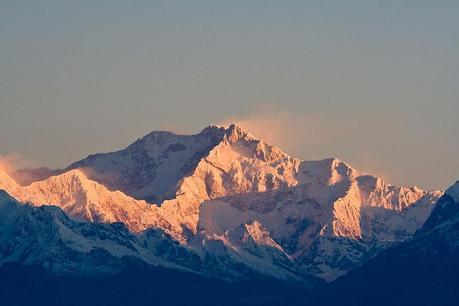 South of the Himalayas lies the great northern plain, with an average width of about 320 km and in some places more than five hundred kilometers wide. This plain is partially occupied taken by the basin of the rivers Indus, Ganges and Brahmaputra.

These glacial rivers provide water for irrigation and a useful sludge layer annually. The thick layers of alluvium make the plains one of the most fertile agricultural areas in the world. Dikes or mud banks are the only notable features that interrupt the monotonous, flat landscape. In the northwest, in the state of Rajasthan, lies the extremely dry Thar desert, also known as the Indian Desert. The most important part of the Indian peninsula is the dry Deccan plateau, with the highest peak in the south. The Deccan Plateau is separated from the Northern Plain by the Vindhya Mountains. To the west, the plateau rises to the maximum 1646 high Western Ghats, which run parallel to the west coast. The Deccan Plateau slopes gently to the east, where it ends in a low ridge, the up to 1,680 meters high Eastern Ghats. In the south, the Eastern and Western Ghats converge to form the Nilgiri Hills, reaching an altitude of 2,600 meters. East of the Eastern Ghats, the country descends to the wide coastal plain.

The peninsula's largest rivers, Cauvery, Godavari, Krishna, Mahanadi and Penner, all flow to the Bay of Bengal. Unlike the Himalayan rivers, these are (monsoon) rain rivers, resulting in a strongly varying amount of water.