Guatemala is located in Central America between Mexico and Belize to the north and Honduras and El Salvador to the south. Guatemala borders the Pacific Ocean on one side and the Caribbean Sea on the other. The coastline is 400 kilometres long. The surface area of Guatemala is 108,890 square kilometres. 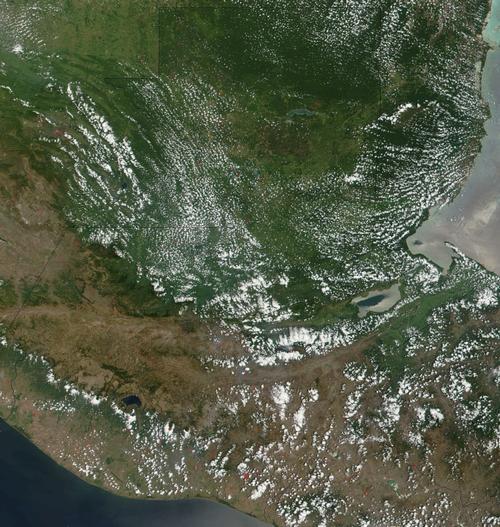 The landscape of Guatemala can be divided into four parts. 1,The highlands 2. The slopes on both sides of the highlands 3. The Petén region with mainly grassland and tropical forests 4. The coastal plains and large lakes.

The highlands range from 1500 to 4000 metres. Most people live in the valleys between 1500 and 2500 metres and cultivate amongst others corn and beans. The landscape is characterised by mountains and deforested slopes. The mountains in the central part of Guatemala are foothills of the Andes. Chains bear exotic names such as Sierra de los Cuchumatanes, Sierra de Chamá and Sierra de Santa Cruz. The Sierra Madre in the south is surrounded by volcanoes.

The slopes on both sides

The slopes on both sides of the highlands are between 600 and 1500 metres. The volcanic soil in this area is fertile and people grow coffee, maize and other crops. Volcán Tajamulco, at 4420 metres, is the highest peak in the country and in Central America. Some of the volcanoes are still active and there are many earthquakes in this area. At night, the volcanoes give the area a brilliant red glow. 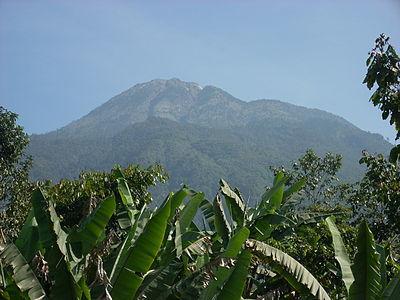 In the sparsely populated Petén region, you will find mainly grasslands and tropical rainforest. This region covers about one third of the country. Unfortunately, in the south and east, trees are cut down on a large scale, causing plants and animals to disappear for good or even to become extinct.

The coastal plains (and lakes)

Few Indians live on the coastal plains. On the Caribbean coastal plain, mainly bananas are grown and on the Pacific coast plantations have been established (rubber, cotton, sugar cane, etc.). The three main rivers - the Rio Polchic, the Rio Motagua and the Rio Dulce - all flow into the Gulf of Honduras. The Rio Usumacinta flows northwards to the Gulf of Mexico. Some of the large lakes for which Guatemala is famous are Lake Petén Itza, Lake Atilán and Lake Izabal.

Guatemala has a tropical climate with big differences in temperature here and there due to the influence of the sea and the altitude. In the highlands, it is relatively cool with temperatures of around 22 degrees Celsius during the day. On the coast, it is warm with daily averages of around 30 degrees Celsius.

Most precipitation falls from May to October. The dry season is from October to May.

The vegetation in the highlands consists mostly of coniferous trees, such as cypress, pine and fir. The flora in the tropical rainforest is very diverse. The ceiba that grows in this area is considered by the Mayans to be a symbol of the cosmos. The zapote and copal trees provide chicle (the raw material for chewing gum) and resin respectively. There are also many plantations. Banana, rubber and palm trees grow there. In Alta Verapaz and the Caribbean, ferns and bromeliads grow in the rain and cloud forest and many kinds of orchids, of which the Monja Blanca (white nun) has been declared the national flower.

There are hundreds of species of birds in Guatemala, of which the noisy coloured macaw and the black-and-yellow toucan are the most common. There are also many vultures. Other animals like monkeys, armadillos and coatis usually stay at a distance. Predatory cats and snakes are hard to find. The cloud forest is the habitat of the quetzal. With its beautiful tail, this colourful bird has become Guatemala's symbol. Among the reptiles, crocodiles, iguanas and turtles are worth mentioning. The largest mammal in Guatemala is the manatee.