Brazil (officially: República Federativa do Brasil) is a federal republic in South America. The total area of the country is 8,511,965 km2. It is the fifth largest country in the world, exceeded in size only by Russia, Canada, China, and the United States 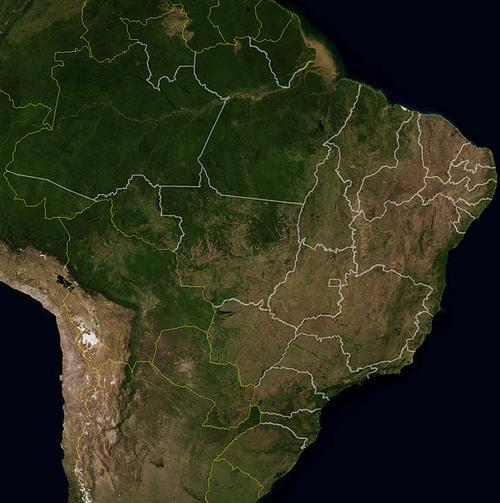 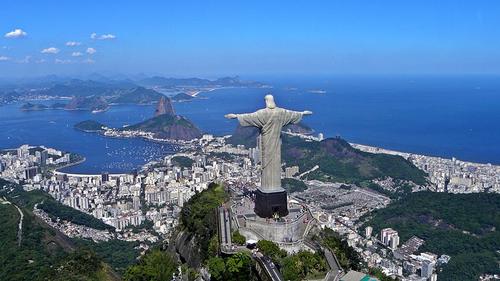 Cape São Roque, on the northeast coast of Brazil, is 2977 kilometers from Africa. The country has no territories outside the continental area, apart from a few islands in the Atlantic Ocean and some coastal islands. The longest road distance is about 5600 kilometers, between Natal in the northeast and Rio Branco in the west.

There are roughly two types of landscape in Brazil: the low plains of the Amazon region and the high plains of southern Brazil. Although Brazil looks mountainous, almost 60% of the territory does not exceed 300 meters above sea level. In general, Brazil is at its highest in the east and decreasing towards the west. Furthermore, Brazil has just about everything: tropical rainforest, savannas, steppes and wetlands. 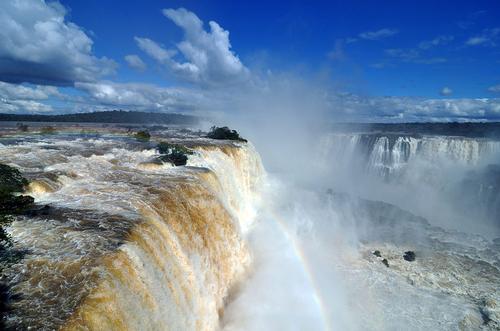 Due to the rapid decline of the rivers, they are full of waterfalls and rapids. Spectacular is the Rio Iguaçu, which plunges 3 kilometers down the border with Argentina into the valley of the Paraña, one of Brazil's three major rivers. This waterfall is 91 meters high and every second 4.5 million liters of water falls over the edge. In the state of Bahia is the Cachoeira da Fumaça, a mighty waterfall of 422 meters high.

The Rio São Francisco (1,600 kilometers) is Brazil's second river, which rises at the city of Belo Horizonte and Minas Gerais and flows into the Atlantic Ocean 3,161 kilometers away. Along this river lie two mountain ranges, the Sierra Mantiqueira and the Sierra do Mar that stretch along the entire coast. The highest mountains here are the Itatiaya (2712 meters) and the Pico de Bandeira (2890 meters) which lie between São Paulo and Rio de Janeiro. The valley between the two Sierras is called Valo do Paraíba. In this area there are also freestanding domed hills (pães) of quartz or rock crystal, for example the "sugar bread" (pães de açúcar) near Rio de Janeiro.

The coastal mountains often extend into large cities such as Rio de Janeiro, which means that entire neighborhoods are wedged between steep slopes and the Atlantic Ocean. The Sierra Mantiqueira is located in the states of Goiás and Minas Gerais and the highest mountains are in the Montes Pirenéus and are about 2400 meters high. The very wetland Pantanal area is located on the high plateau between the Sierra Mantiqueira and the Urucum massif of Bolivia. This area, 259,000 km2 in size, overflows every six months and forms a beautiful nature reserve.

The southern slopes of the Guyana Highlands belong to Brazil, including the Sa. Pacaraima and the Sa. Tapirapecó.

To the west of the country is the plateau landscape of the Mato Grosso and to the east of this is the Highlands of central Brazil. This mountain country is on average between 400 and 1000 meters high.

The Amazonian lowland is a river region that extends to the Andes mountains in Peru and it is a very old, flat and bowl-shaped curved area. In Peru the Solimoês flows in the Amazon and in Brazil the Amazon is fed by the Rio Negro. At Manaus, these two rivers merge to form the actual Amazon. The enormous Amazon is also fed by hundreds of rivers. The southern rivers originate on the plateau, the northern rivers on the Serras das Neblinas, a mountain range in the north of Brazil near Venezuela. Here is also the highest mountain in Brazil, the Pico Phelps (3045 meters).

The coasts are not very articulated; only the large Amazon Delta represents a significant interruption. In the extreme south, the coast is characterized by large coastal lagoons, including the Lagoa dos Patos and the Lagoa Mirim. Imposing sand dunes can be found near northeastern Natal, in the state of Rio Grande do Norte. Brazil's total coastal length is approximately 7,700 km, making it the longest continuous coastline in the world. 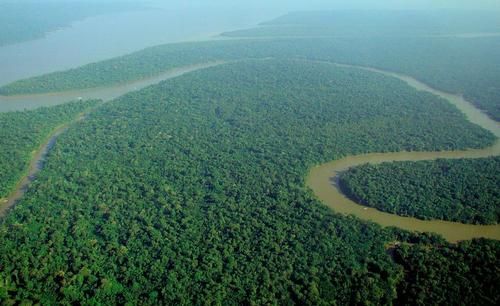 The Amazon region has the richest tropical rainforest in the world and nowhere are so many species of plants and animals to be found. The Amazon region is about 4 million km2 in area, which is about half of Brazil's total area. The area is mainly located in the states of Amazonas, Pará, Amapá, Roirama and Acre.

The tropical rainforest of the Amazon does not stop at the border of Brazil, of course, but continues in French Guiana, Suriname, Guyana, Bolivia, Ecuador, Peru, Colombia and Venezuela. It is estimated that there are still 800,000 Indians in the total Amazon region, of which 120,000 in Brazil. The rest of the population mainly consists of "mamelucos" or "cablocos", people with Native American and Portuguese ancestors.

The main economic activities in the Amazon region are cattle breeding, mining and, often illegal, timber production. A new threat threatening the Amazon is the discovery of oil in the heart of the rainforest. The opening up and exploitation of available stocks is generally done with the help of foreign investors. Due to all these economic activities there is a threat of a clear-cut in the Amazon region, which is unparalleled in world history. Probably between ten and fifteen percent of the "lungs" of the world have disappeared in a relatively short time. In the late 1980s, 21,500 km2 of rainforest per year disappeared.

Environmental organizations, scientists and Native Americans, the main victims of uncontrolled exploitation and colonization of the Amazon, have warned for many years of the catastrophic consequences if deforestation and environmental pollution continue at this rate. They are occasionally successful and the government of Brazil also seems to become increasingly aware of the precarious situation. In the new constitution, a separate chapter is devoted to ecology and the Color government has created a new department, The Institute for the Environment and Protection of Natural Resources, IBAMA. In the early 1990s, "only" 11,000 km2 of rainforest was felled. However, many more international pressures and money seem necessary to interrupt the negative spiral.

One person who fiercely opposed the tropical rainforest's demise was the chairman of the rubber tappers union, Chico Mendes. Unfortunately, he became too troublesome and was found murdered outside his home on December 22, 1988. The assassins were hired by a large landowner.

Under the name Marañon, the Amazon originates in Peru, at the foot of the Andes. In Brazil it is first called Solimões and only when the Rio Negro flows into it is the river Amazon called.

The Amazon (Rio Amazonas) in Brazil is 3150 kilometers long; the entire length of the river is 7025 kilometers. Only the Nile in Africa is longer. Major tributaries are the Rio Negro, the Xingu, the Madeira, the Tocantins and the Tapajós. The Amazon is further fed by about 1000 tributaries that spring in the mountains of Colombia, Ecuador and especially Peru and Bolivia. At its widest, the Amazon is 12 kilometers. The Amazon River (Rio Amazonas) is the largest river system in the world and has the largest freshwater supply in the world. The estuary of the river is 300 kilometers wide near the city of Belém and consists of hundreds of islands and rivers.

The largest island in the Amazon estuary is Ilha de Marajó. The surface of this island is almost 50,000 km2, making it the largest river island in the world and larger than many European countries!

It is remarkable that there is not a single bridge over the Amazon.