Brazil had 207,353,391 inhabitants in 2017. This means that the average population density is approximately 20 inhabitants per km2. In 1950 Brazil had only 50 million inhabitants. About three million Brazilians are added every year, not to mention the number of immigrants. This population explosion is one of the major problems Brazil is struggling with.

The distribution of the population is characterized by a large degree of inequality: in the coastal areas of the north and southeast and the south, about 90% of the total population lives on just over one third of the surface. The Amazon and the west, on the other hand, have a population density of 1 and 2.9 inhabitants per km2, respectively. There is a continuous urbanization: 86% of the population lives in the cities (2017), within which especially the slums or favelas have expanded at lightning speed. Brazil has changed from a predominantly agricultural to an urban society in a period of about fifty years. The largest urban areas are São Paulo (21 million inhabitants) and Rio de Janeiro (13 million), two of the largest cities in the world. In the northeast and north lie the metropolitan cities of Salvador da Bahia, Recife and Fortaleza, in the Amazon Belém and in the south Porto Alegre. Major inland cities are Manaus, Brasília and Belo Horizonte.

The population of Brazil is very heterogeneous in composition and of Indian-African-European origin. The number of Indians who still have the original way of life is less than 0.4% of the total population. This number is still decreasing, partly due to the reclamation of the Amazon. Occasionally, massacres of Indians have been reported. Indians also live in Central West Brazil, which are partly located in approximately 128 reserves. The Fundação Nacional dos Indios is the body whose task is to ensure that the Indians are integrated into society in a gradual and peaceful manner. The fact that not much of it ends up is due, among other things, to the enormous expanse of the interior, the lack of the necessary money and the disinterest and corruption in the civil service.

The very first settlers, the Portuguese, remained largely unmixed in the port cities, but in the interior they mingled with the native people. Especially between 1880 and 1914, many immigrants came to Brazil: Italians, Spaniards, Syrians, Lebanese, Poles and Germans. In 1908, 799 Japanese were added, followed by hundreds of thousands of compatriots.

The white part of the population is the majority with 47%. This is followed by mulattoes of European-African-Native American descent by 43%. The black population consists of 7.6% of the population. There are also cafuzos of Indian-African origin. All people of mixed origin are called mestiços (mestizos).

São Paulo is the migrant city par excellence with large Italian, Arab and Japanese neighborhoods. About 1 million Japanese live in the states of Paranána and São Paulo. The state of São Paulo and the southern states of Santa Catarina, Rio Grande do Sul and Paraná are home to Dutch, German, Swiss and French colonies.

Although all population groups live together in reasonable harmony, it is still very difficult for the colored population to rise higher, both economically and in social class. 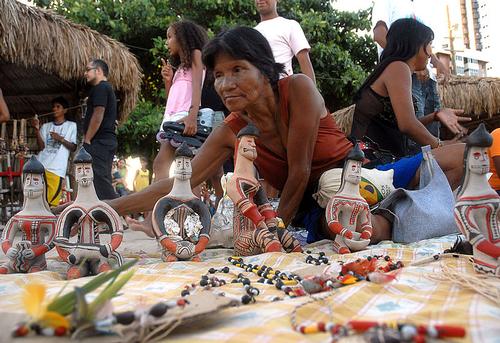 Originally, about three million Indians lived in Brazil. It is believed that since the arrival of Europeans, about 700 Indian tribes have disappeared due to diseases, massacres or mixed with other populations. At the moment, only about 300,000 remain. According to the latest counts, there are still about 140 Indian peoples who all have their own languages and dialects. A total of 174 different languages and dialects have been counted. The level of civilization also varies widely. Many other Indian tribes have been mixed with the conquerors and settlers over time. "Cablocos" are descendants of whites and Indians, "mamelucos" of Indians and blacks.

The upper reaches of the Rio Negro in the state of Roraima are home to the largest group of traditionally living Indians, the Yanomani, hunters and gatherers. The Yanomani were only discovered in 1973 and were still living in the Stone Age. The 18,000 Yanomani are spread over approximately 320 villages on both sides of the Brazilian-Venezuelan border. They speak four related languages: Yanomam, Yanam, Yanomamo and Sanumá.

In 1973, the Indians were granted the right to their territory and the fruits of it. Due to some small print in the "Indian statute", the Indians were often allocated no more than a limited territory as a reserve. Later in the 1970s, several Native American tribes rebelled against all negative developments and founded the Union of Native American Nations (UNI) in 1981. The position of the Indians has been strengthened somewhat by all national and especially international actions to preserve the rainforest. An important success for the Native Americans was the acquisition of civil rights in 1988, which allowed the Native Americans to vote and hold public functions. In 1989 the Indians achieved great success. The construction of the Altamira-Xingú dams, which would cause the Indians to lose a large part of their territory, was canceled because the World Bank withdrew as a financier under pressure. It could be said that the Indians won these battles, but the "war" is far from over.

Brazil was a real plantation society from the sixteenth century, for which a total of about five million Africans were brought to Brazil as slaves in the period 1532 and 1850 (abolition of slavery). The plantations were mainly located in the northeast in the coastal region. Most descendants of the slaves can be found there and most blacks live in the state of Bahia.

Of course, there was soon mixing between the slaves and the white rulers. Its descendants, mulattos, form a large part of Brazilian society and live mainly in the coastal regions of the north and southeast and inland of the state of Minas Gerais.

In religion, football, music and dance, Africans make an important mark on Brazilian culture. There is still a great deal of social disadvantage and discrimination is still the order of the day.

In 2007, an Indian tribe was discovered in the Amazon region that has so far had no contact with the Western world. The 87 members of the Metyktire tribe live in a barely accessible area about 2000 kilometers northwest of Rio de Janeiro.