Thailand (official name: Ratcha Anachak Thai, short form: Prades of Prathet Thai, Muang-Thai = 'land of the free people' until 1939 in Europe known as Siam), is a kingdom in Southeast Asia and is located on the Indochina peninsula. 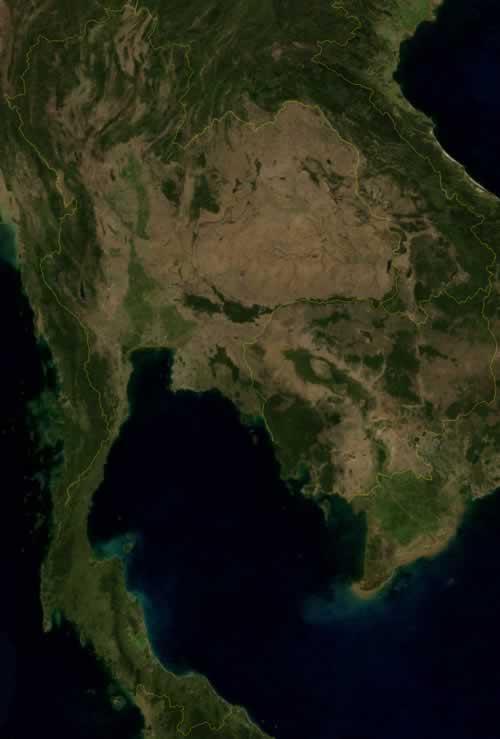 From north to south Thailand measures a maximum of 1500 kilometers and from east to west 800 kilometers. At its narrowest point, the isthmus of Kra Buri, Thailand is only 13 kilometers wide.
Thailand is bordered to the northeast by Cambodia (803 km), in the north to Laos (1754 km), in the west to Myanmar(1800 km: former Burma) and in the south at Malaysia (506 km).
Southern Thailand consists of a long peninsula of more than 1200 kilometers, which is bordered on the west by the Andaman Sea as part of the Indian Ocean, and to the east by the Gulf of Thailand as the last offshoot of the South China Sea. Off the coast are hundreds of small and large islands, both on the west coast and on the east coast.
Phuket (Malaysian: bukit = hill) is located in the Andaman Sea just off the coast of Phang-nha province and is Sarasin Bridge connected to the mainland. With 810 km2 it is Thailand's largest island. Ko Chang is the second island with 500 km2, Samui is the largest island in the Gulf of Thailand with 247 km2.

Thailand has a varied landscape with forested mountains, deep valleys with fast-flowing rivers, cultivated fields with large waterways, dense rainforests and areas with barren, dry soil.
About half of Thailand is mountainous and land can be divided into four natural landscapes:
The Northern Thai mountain country consists of the last foothills of the Himalayas, which run more or less parallel to each other from north to south. Along the western border with Burma, a young fold of mountains extends that decreases in height from north (mean elevation 1500-2500 m) to south (50-100 m). Thai mountain country (average altitude 1500 m), cut by the four main source rivers of the Chao Phraya into a number of mountain ranges, valleys and basins. The narrow valleys are formed by the rivers Nan, Yom, Wang and Ping.
The Doi Inthanon or Angka in the western highlands is Thailand's highest peak at 2,576 meters. This region is also known for its spectacular waterfalls and an abundance of caves hidden in the limestone mountains. 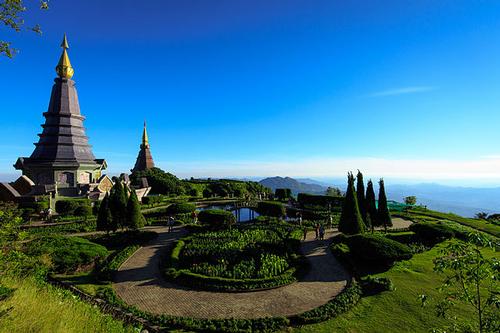 The central lowlands to the south of the Northern Thai mountainous region is a fertile swamp bed that is very suitable for rice cultivation, and is made up of the silt produced by the Chao Phraya or Mae Nam (mother of waters) and other rivers (Wang, Ping, Yom, Nan, among others) is argued. The area has almost the shape of a rectangle and measures approximately 200 by 440 kilometers. The flat land is bordered on the north and west by mountains and on the east by the ridges on the border with the Khorat plateau. This area includes the metropolis Bangkok and it is also the main industrial area.
The Chao Phraya is Thailand's main waterway, which originates in to the north and just below the capital Bangkok flows into the Gulf of Thailand. Annually the delta grows about six meters due to siltation.

The Khorat plateau, which covers Northeast Thailand (Isan), is cup-shaped, bordered on the north and east by the Mekong and on the west and south with mountains. The plateau is separated from the Central Plain by steep slopes, up to more than 1000 meters high, and ends in the southeast on the Dangrek Mountains on the border with Cambodia.
The soil consists mainly of barren fine-sandy loam, the poorest part of the country. Yet the poor soil consists almost entirely of arable land. This area used to be covered with extensive forests, which, however, have almost completely disappeared due to intensive exploitation. It is estimated that less than 50 years ago, 70% of Thailand was forested; nowadays it is only 15%. Reforestation programs have had little success, on the contrary, forest areas are still being illegally cut down. 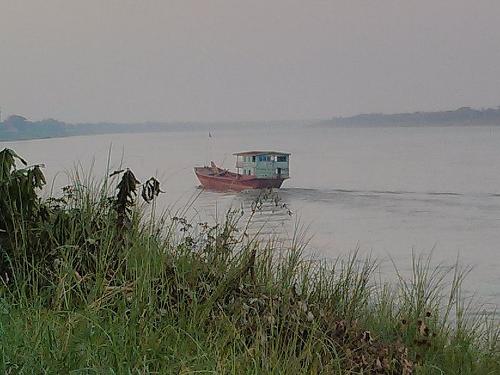 The main rivers are the Chi and Mun, which flow into the Mekong, the fifth largest river in the world.
The Thai headland in the south is occupied by foothills of the western mountainous region, with mostly narrow coastal plains on both sides. The coast is strongly articulated and the interior consists of hills and rain forests. The mountains here are foothills of the Cardamom Mountains, a Cambodian mountain range that gradually rises from 500 to 1,600 meters. Off the coast are many small islands, of which the tourist Phuket in the Andaman Sea and Ko Samui in the Gulf of Thailand are the best known. Most notable in this area are the gigantic limestone formations rising from the Andaman Sea.