Mali (officially: Republik Mali - République du Mali) is a republic in West Africa. The total area of the country is 1,240,192 km2, making Mali the sixth largest country in Africa. Mali is almost five times the size of Great Britain. Mali is bordered to the north and northeast by Algeria (1376 km), to the west and southwest by Niger (821 km), to the south by Burkina Faso (1000 km), Ivory Coast (532 km) and Guinea (858 km), and in the east to Senegal (419 km) and Mauritania (2237 km). Mali has no access to the sea and uses the ports of Dakar (Senegal) and Abidjan (Ivory Coast). 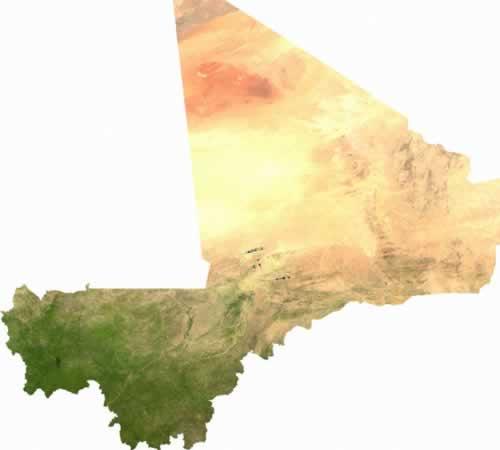 Central Mali is part of the Great West African Rift and consists of plateaus (table mountains) rarely more than 450 m high, and plains. Southern Mali lies in the basins of the rivers Niger and Senegal, while in the extreme southwest there are a number of sandstone mountains with fairly steep cliffs.

The northern, almost uninhabited half of the country lies within the Sahara, but the desert is advancing further and further south. Only Moors and Tuareg live here. In this desert area of Northern Mali, only the wadis (dry riverbeds) still have some vegetation. 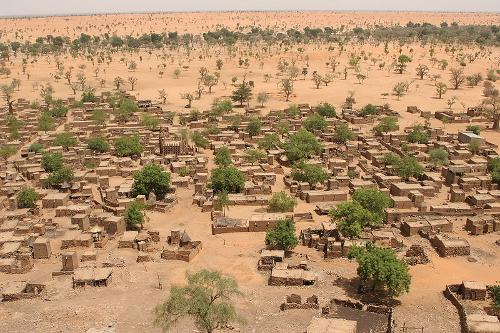 The Sahara is the largest desert in the world with about 7 million km2 of which 28% is located in Mali. Southern Mali is a swamp and steppe area with forests in the south and gallery forests in some places along the rivers. Some arable farming is also possible here. The transition zone between desert and savannah, the Sahel, lies between the north and the south. The Baoulé National Park and the Manding Highlands are located in Western Mali. Here, rivers used to carve out terraced ravines. In the east of the country lies the jagged Adrar des Iforhas mountain range, with altitudes of 500 to 900 meters. South of Mopti is a 200 kilometer long, steep rock face, the Falaise de Bandiagara. The Dogon have built their villages against this wall. The northern spur of this plateau forms the highest point in Mali, the Hombori Tondo at 1155 meters.

A large part of Mali was once occupied by a large lake. A remnant of this is the vast swamp area around the middle Niger that flows in a northeasterly direction between Sansanding and Kabara. Due to the changing climate, long periods of drought have caused this previously fertile inner delta to increasingly dry out, which has major consequences for both the population and the animal world.

The Malian landscape is largely determined by a number of large rivers. The most important river is the Niger, which flows 1500 kilometers through Mali. In the west flows the Senegal (670 kilometers in Mali) which is fed by the tributaries Bafing, Bakoy and Baoulé. The Falémé is the border river with Senegal.