Jordan (officially: Al-Mamlakah al-Oerdoennijjah al-Hasji-mijjah = The Hashemite Kingdom of Jordan) is a kingdom in the Middle East, east of the Jordan River. 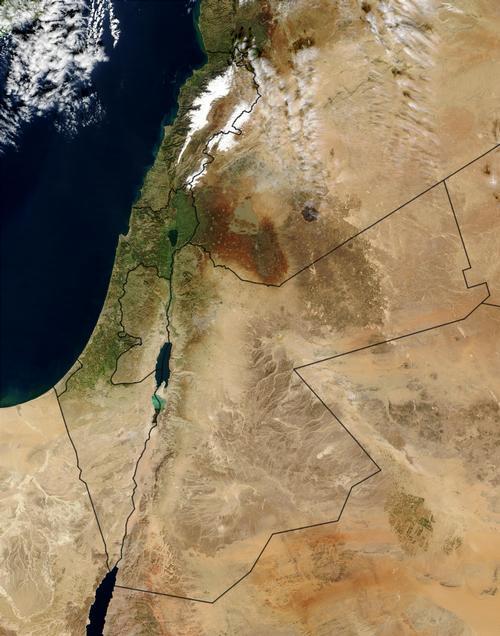 In the south, Jordan has a small coastal strip of 26 km on the Gulf of Aqaba.

Jordan can be divided into three landscapes: the Jordan Valley, the hilly country in the west, and the East Jordanian desert plateau, which extends into Syria and Saudi Arabia. Desert makes up 91% of Jordan's total land area.

Geologically, Jordan is located at the junction of the major continents of Eurasia, Africa and India. Hence, there are cracks in the earth's crust here; for example, one of the largest in the world is in the Gulf of Aqaba, 7000 kilometres long all the way to Mozambique.

The Jordan Valley in the west is the lowest valley on earth. The water level of the Lake of Tiberias is at -210 metres, the Dead Sea is at -410 metres, the lowest point on earth. The Dead Sea has a very high salt content of more than 30%. The width of the sea varies from 5 to 16 kilometres, the length is 75 kilometres. Its depth varies from 400 metres in the north to 5 metres in the south. These numbers are subject to change because the water level is dropping, among other things due to large evaporation.

The valley is a so-called fault valley formed by tectonic movements in the earth's crust. The valley forms the northern spur of the fault line between the African and Arabian earths. At sea level, the valley is about 8 kilometres wide at the mouth of the Yarmuk in the Jordan, up to about 25 kilometres north of the Dead Sea. On both sides of the valley the mountain slopes rise steeply.

South of the Dead Sea the fault valley continues in the very dry Wadi Araba, and at Ash-Shawbak sea level is reached again.

The hilly country in the west is more of a plateau, in many places cut by deeply incised valleys through which wadis (riverbeds) run to the Jordan and Wadi Araba. Jordan's highest peak is in the extreme south of the country, the Jabal Umm al Dami measuring 1854 metres. Another high mountain in the south is the Jabal Ram with 1754 metres. In the north, the Um ad-Daraj reaches a height of 1247 metres.

To the east of the hilly country stretches the very extensive East Jordanian desert plateau, with an average altitude of 500-600 metres. Northeast Jordan belongs to the Syrian Desert, the southeast to the deserts of the Arabian Peninsula. In the east, a number of wadi valleys run towards the Wadi as-Sarham.

Al-Azraq and Al-Jafr are the main oases in this area and characteristic of the entire Jordanian desert are the black lava fields.

The main rivers are the Jordan River (Arabic: Al-Ghawr) with a length of only 97 kilometres, and its tributaries, the Yarmuk (Nahr al-Yarmuk) and the Zarqa.

The Jordan rises on the western slope of Mount Hermon in Syria and empties into the Dead Sea.