Georgia (Georgian: Sakartvelo and officially: Sakartvelos Respublica), is a republic in the Caucasus and a former republic of the Soviet Union. The Caucasus, like the Himalayas, is a young mountain range only 25 million years old. The mountain range stretches for about 1200 km and contains more than 2000 glaciers with a total area of 1780 km2. 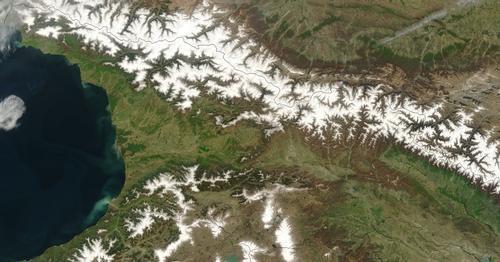 For a relatively small country, Georgia has a very varied landscape. In the north of the country, the main chain of the Great Caucasus extends from the Black Sea to the north-eastern borders with Dagestan and Azerbaijan. The highest mountains here are over 5000 metres high, the highest mountain being the Shkhara at 5068 metres. The two other mountains above 5000 metres are the Janga with 5059 metres and the Mkinvartsveri with 5033 metres. Another mountain range, the Likhi, more or less divides the country in half. More than half of the country lies above 900 metres and about 40% of the area is covered with forests. Around Poti on the Black Sea coast there is a wet flat area and to the north and south of this the hills slowly give way to the mountains of the interior. South Georgia consists of the lava plateaus of the Lesser Caucasus with ancient volcanic cones. In the east, all the rivers converge on the Mtkvari (1364 km in total), which originates in Turkey and flows into the Caspian Sea via Azerbaijan. The rivers west of the Likhi Mountains, such as the Rioni (327 km) and the Enguri (213 km), flow into the Black Sea. Georgia has more than 850 lakes, of which Lake Paravani is the largest at 37.5 km2.

Georgia has about 2000 mineral water springs that produce 130 million litres of water per day. There are more than 500 types of spring water.

At least 15% of Georgia's soil is limestone, so it is not surprising that there are many caves. The Pantiukhin Cave is considered the second deepest in the world with a depth of 1540 metres.