Compared to the animal world, the plant world is quite monotonous, but very special. About half of the 350 native species are endemic. The relatively small number of species is due to the drought on the islands and the barren soil.
On the southern slopes of the mountains there is a rainforest with, among other things, numerous woody composites. Some characteristic plants are the eagle fern, the miconia and the scalesia. The scalesia is the Darwinian finch of the plants. They vary from shrubs to meter-high trees, but descend from one species. 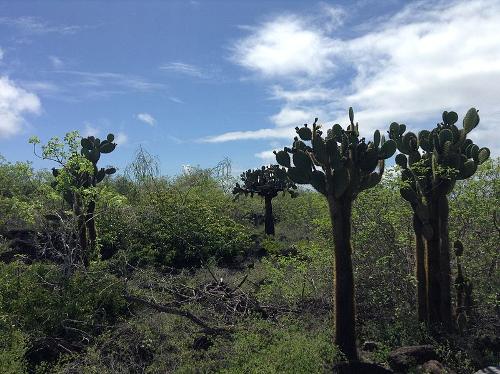 On the coast, special cactus-like plants such as Euphorbia viminea and Opuntia galapagensis grow and sometimes form gigantic prickly pear forests there. The meter-high candelabra cactus is striking because of its large tube-like leaves. On the coast we also find different types of mangrove: black, white, red and button mangrove.

Another striking plant is the "palo santo", the wood of which spreads a striking scent, which is like incense to the mainland of Ecuador is being exported. The lava cactus grows on pure lava.

It is remarkable that there are no palm trees on the islands, unlike all other islands in the Pacific Ocean. Inland, where it is a bit more humid, the landscape is characterized by extensive savannas. For example, here grows the "lechesos", a 10 meter high type of sunflower. Flowers only have a white or yellow color. The younger islands are practically barren.

The animal world of the Galápagos is scientifically very important: there are antarctic shapes (pinguïns) and tropical elements side by side. There are many endemic species i.e. those that occur only on the GaláPagos Islands;this is especially true of the breeding birds (76 species out of 89) and the reptiles.
The study of this animal world helped to underpin the theory of evolution of Charles Robert Darwin, who visited the islands in 1835 on his legendary journey with the Beagle. He also noted that animal species change under pressure from the environment, and as a result, new species will eventually emerge. Furthermore, the islands are famous for the presence of closely related subspecies on the different islands. It is remarkable that the animals on the islands are naturally tame due to the lack of natural enemies.Feral pets, mainly goats, pigs, dogs, cats and rats have the original animal (and plant) world for an important part has been reduced and here and there certain forms have already been outcompeted. Reasonably successful efforts are being made to contain this danger to the native animal world. 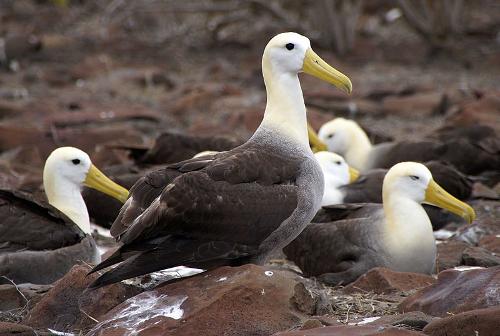 The cormorant can fly anywhere in the world, except on the GaláPagos Islands. The walking cormorant has too small wings to fly. They can only be found along the coasts of the islands of Fernandina and Isabela.

The largest seabird of the Galápagos islands is the Albatross with a wingspan of almost 2.5 meters. From January to March they live at sea almost all the time. The rest of the year they live almost together on the island of Española.
The large pink flamingos live in large groups and can reach 120 cm with a wingspan of more than 1.5 meters. The flamingo, unlike the other animals, is not tame and it is thought that this is because they have not been present on the islands very long. This fish-eater cannot dive underwater and often steals its prey from other birds. The best place to see this bird is Seymour, a rock off the coast of Baltra.

The Galápagos pinguïn is the most northerly species of pinguïn. It is one of the smallest species and often does not exceed 50 cm. Nesting grounds can often be found on the islands of Isabela and Fernandina.

The most common birds are the famous Darwin finches. There are thirteen species, all of which are probably descended from one species. The study of these birds led, among other things, to Darwin's theory of evolution. He found that through natural selection, the birds can evolve in a direction that offers the best chance for survival. The four species of mockingbirds probably also descend from one ancestor.

The red flycatcher is found in the highlands. This little bird makes ludicrous movements in the air. Another species is the Galápagos flycatcher.
Other common birds include owls, tropic birds, gulls (endemic are the swallow-tailed gull and lava gull), herons (including great blue heron, lava heron and night heron) and pelicans. Endemic species include the Galápagos hawk (actually a buzzard!) And the Galápagos pigeon. The iguanas or Iguanas look prehistoric. The marine iguana is the only one in the world that can stay underwater for a long time, some more than an hour. They mainly feed on seaweed and live mainly near Punta Suárez on Española island. On Isabela, Fernandina, Santa Cruz and Santa Féthere are two species of endangered land iguanas that can grow to more than 1.5 meters. They can live to be about 60 years old.

The endemic giant tortoise is also facing extinction due to the centuries-long hunt for the animal. The islands are named after these animals. About 15,000 animals still live there, most of them in reserves. Fourteen subspecies have existed, three of which are already extinct. They can weigh 250 kilos and grow up to 1.5 meters in height. The maximum age is estimated at about 150 years. The Pacific Green Sea Turtle is one of the four species of sea turtles found in the GaláPagos Islands. They are smaller than their fellow countrymen, but can still weigh as much as 150 kilos. Other species that can sometimes be seen: the leatherback turtle and the loggerhead turtle.

Three species of the genus Dromicus occur on the islands. They are choke snakes that can grow to about 1 meter long. Other reptiles include geckos and lava lizards.

The Galápagos fur seal is very similar to the sea lion, but much smaller. The fur seal mainly lives on the island of Santiago. The approximately 50,000 sea lions live spread over almost all islands. They can reach a weight of 250 kilos.
Seven species of whales live around the Galápagos islands, including sperm whales, fin whales and orcas. Dolphins are abundant, especially the common dolphin and the bottle-nose dolphin. In addition to a few species of Galápagos rats, only one bat species occurs. 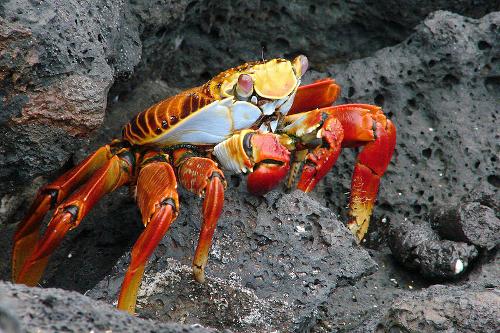 The most striking fish are the rays. The largest is the manta with a wingspan of up to six meters. Other species include the spotted eagle ray and the golden ray, which sometimes swim around in impressive schools. The stingray can injure you if you step on it. Sharks come in many species around the islands. The hammerhead shark is the most striking appearance, reaching up to five meters in length. Other species include the Galápagoshark and the white-tip reef shark.
Furthermore, underwater nature has many tropical fish and large quantities of coral, including the rare black coral. A random list: meter-long tunas, sticklebacks, sea bass, seahorses, parrotfish, hedgehog fish, yellow-tailed surgeonfish and whiteband kingfish.