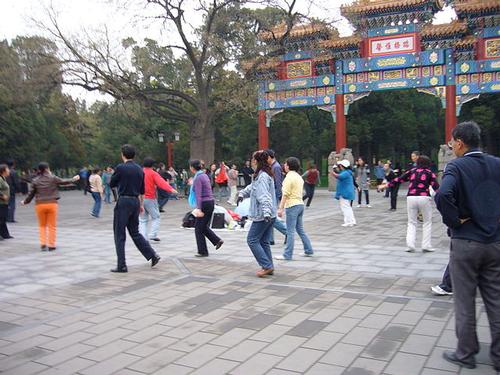 Estimates of population size and growth vary widely. Officially, 1199 million people lived in China (including Hong Kong, Macau and Taiwan) at the end of 1994, but unofficial sources indicated a population of 1,300 million. The U.S. CIA kept its population at 1,379,302,771 in 2017, more than a fifth of the world's population. Population growth in that year was 0.41%. China aims for a population growth of 0 percent. the growth of 0 percent should be achieved in the middle of the 21st century and the number of inhabitants stabilized at 1.6 billion.

17.1% of the population was under 15 in 2017. After 1953, the number of children per woman fell (from 3.7 to less than 2) as a result of an intensive campaign for family planning and social changes (including one-child policy, involvement of the married woman in the production process and expansion of the Education). The mortality rate fell sharply in this period from 22 ‰ to 7.7 ‰ in 2017. This is due to improvements in sanitary and hygienic conditions and an expansion of medical facilities. Due to the one-child policy and the decline in the death rate, the aging of the population will increase sharply: the number of people aged 60 and older will increase by 250 million to 400 million in the next 25 years.

With the exception of Macau and Taiwan, about 15 to 30 million Chinese still live abroad, most of them in Southeast Asia. The Chinese themselves give higher figures than the countries where they live. In these countries, Chinese born in the country are often no longer considered Chinese. 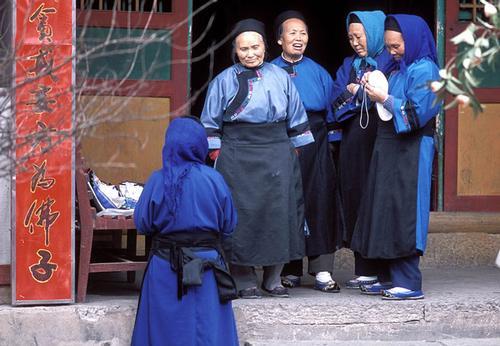 The actual Chinese (Han) make up about 92% of the total population, and live mainly in the densely populated east of China. China has been Han Chinese for more than 2,000 years, except for Xinjiang, large parts of Yunnan, Tibet, Qinghai, Inner Mongolia and parts of Manchuria. There are also major cultural and linguistic differences within Han China. Examples include the Hakka, the Tujias (living in Hunan, Hubei Sichuan), the Cantonese, and the largest Han minority, the Zhuang (approx. 20 million). Found mainly in the southern provinces of China, the Zhuang belong to the Thai Dai race and speak a Sino-Tibetan language.

The remaining 8% consists of approx. 55 groups, the most important of which are the Zhuang, Hui (Huy), Uyguren (Uighurs), Yi, Miao, Man (Manchoes), Xizang (Tibetans) and Menggu (Mongols). The population size of the minorities varies enormously, from about 20 million Zhuang to about 1500 Hezhe, who live in the northeast. The non-Chinese groups, recognized as national minorities since 1979, are mainly spread across western and southwestern China, particularly in the usually sparsely populated border areas. In total, approximately 60 million people are counted as minorities. The political significance of these 'national minorities' is important because they inhabit strategically important border areas and, as a rule, belong to the peoples who also live in neighboring states.

However, it is known that a strong migration of actual Chinese has taken place to these areas (including Xinjiang Uygur, Heilongjiang, Jilin and Inner Mongolia) to accelerate development, but most likely also to 'make Chinese' the non-Chinese expedite regions.

The largest population concentrations are in the coastal areas and in the fertile valleys of the Huang He and Yangzi Jiang, the North China plains, the South China coastal strip and the loess plateau of central China. More than 1000 people per km2 live at the mouth of the Yangzi (Shanghai, among others) and in certain districts of Guangdong. The population density of the metropolis of Shanghai, with almost 19,000 inhabitants per km2, is among the highest in the world.

The urbanization is relatively small: about 50% of the population lives in the cities. 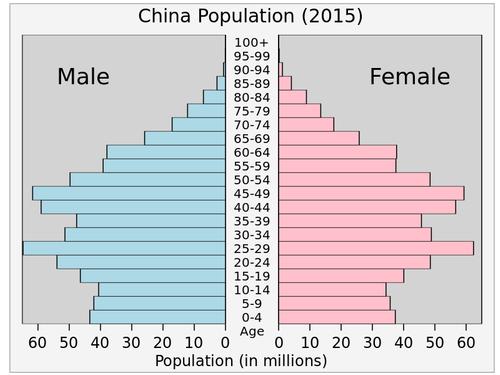 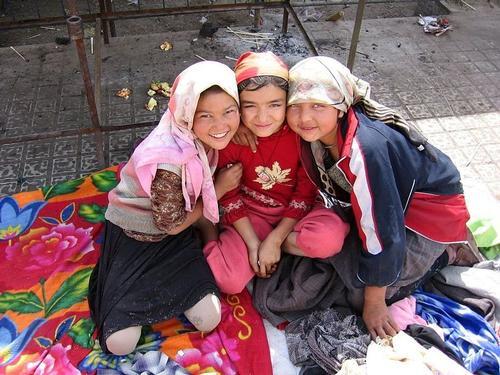 The largest Turkish-speaking minority group in this region. They are a Sunni Muslim people. For a long time they belonged to one of the most developed cultural minorities of Central Asia, with their own Arabic script.

Kazakhs are Turkish nomads made up of about 1 million people, many of whom fled to China after the Russian Revolution in 1917. In general they still lead a nomadic existence and they travel around with their camels and yurts (nomad tents).They mainly live in the northern plain of Xinjiang which forms a natural unit with Kazakhstan on the other side of the border.

This is also a nomadic, Islamic Turkish minority group. After the 1916 uprising in Russia, large numbers of Kyrgyz fled to China, mostly settling north of Kashgar.

The Hui are not so much an ethnic minority as a religious minority. It is a Muslim group of approximately 7 million people and descended from Chinese converts to Islam. They are Islamic descendants of the Middle East merchants who populated the Silk Road. They now mainly live in Gansu, Xinjiang, Qinghai and Ningxia provinces, but also in cities such as Xi´an (this city even has 15 mosques), Beijing and Guangzhou. They speak Chinese and most are indistinguishable from Han Chinese.

The Sibu live in the northwest and are descendants of Manchu troops who lived in Xinjiang during the Qing Dynasty.

The Tajiks are originally from Iran and live in the west along the border with Tajikistan. Important city is Taxhorgan or Tashkurgan. They speak a kind of Persian and only consist of about 20,000 people.

More than 8,000 Chinese Russians live mainly in northern Xinjiang. In 1917, the existing group was reinforced with refugees from the Russian Revolution.

Below is a brief description of population groups from various Chinese provinces and regions:

In the south, the YI (about 5 million people) live in the provinces of Yunnan, Sichuan, Guangxi and Guizhou. The MIAO live all over the south as well.

In the northeast of China there are still about 2.5 million MANSJOES, a traditionally warlike people, but now almost fully assimilated within Han culture. 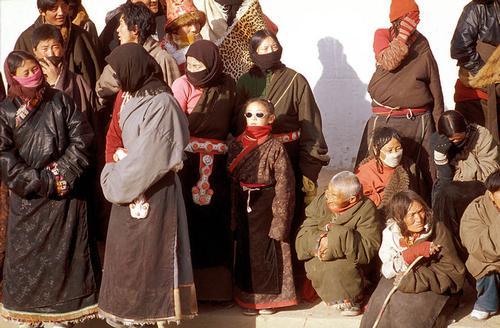 The TIBETANS (approx. 3.5 million) live not only in the native region of Tibet, but also in the mountainous interior of China, such as western Sichuan, western Yunnan, southeastern Gansu, and Qinghai. Tibetans also live in exile in India and Nepal. The Tibetans are descended from the Turan and Tangut peoples of Central Asia who migrated to Tibet from the north and mingled with the locals.

The NAXI lived in northwest China in the provinces of Qinghai, Gansu, and Sichuan thousands of years ago. Invaders from Central Asia expelled them to southern China. The Naxi are among the few peoples in the world where the remains of a matriarchal structure are still clearly present. The women perform both the burdensome and important tasks, thereby dominating family life. The men are traditional gardeners, take care of the children, make music and often have a passion for horses.

The DONG are a minority of approximately 1 million people spread across Guizhou, Guangxi and Hunan. Sanjiang City in Guangxi Province is the center of the Dong District. The Dong are a people who get along well with wood. For over a thousand years, the Dong has been building bridges and houses with intricate wooden structures. They have their own language.

The BOUYEI in the southern province of Guizhou are considered the original inhabitants of this province, although they are descended from the Thai people and are related to the Zhuang. The Bouyei are generally very poor and depend on the water for their livelihood.

The DAI tribe lives in Yunnan Province, Xishuangbanna Autonomous Region and is made up of three groups: the Water Dai, the Dry Dai and the Dai Flower Belt, which are distinguished by clothing, traditions and social conditions. For a long time, the Dai have their own written language, a Sino-Tibetan language of the Zhuang-Dong branch. The Dai are very religious and adhere to Theravada or Hinayana Buddhism, which was spread from Myanmar (Burma) about 1000 years ago.

Yunnan Province has a population of 35 million, of which 23 million are Han Chinese and 12 million are among many minorities, such as MIAO, BAI (one of Yunnan's oldest indigenous tribes), YI, NAXI, HANI, JINGPO, WA, and the JINUO.

The first government birth control program dates from the mid-1950s, and the last program became effective in September 2002. In 1978, the government launched a campaign to limit the number of children per family to one. This campaign was most successful in the urban areas. In rural areas, where traditions are stronger and large families are needed to work the land, the program has produced much less results.

Because in China the heritage is passed on through the male line, male offspring are preferred. It is not uncommon for newborn girls to be killed or abandoned in rural areas. The result was a disrupted population structure. From 1953 through 1964, the neonatal ratio was 105 male babies to 100 female. The ultrasound scan (from 1979), which makes it possible to determine the sex of the fetus, greatly changed this ratio to 119 male babies, compared to 100 female babies in 1992.

In general, it can be said that the campaign resulted in about 200 million fewer births. Since September 2002, there is freedom to have a second child. Furthermore, during pregnancy no selection can be made for boys or girls and secondary schools are prohibited from distinguishing between boys and girls. This last program change was partly prompted by domestic and foreign criticism of the one-child policy in particular.