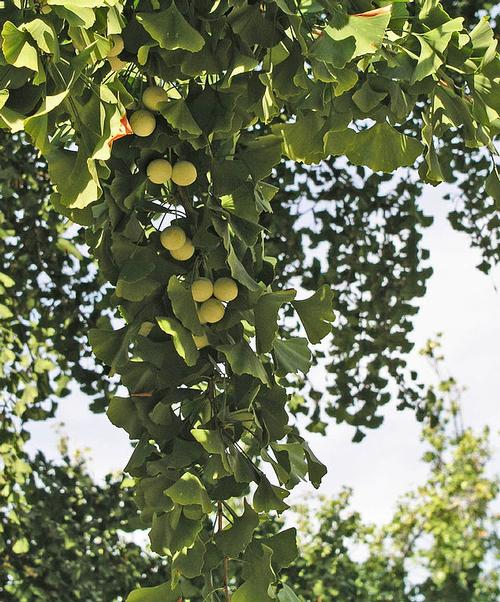 China has a very varied vegetation with approx. 32,000 higher plant species. However, the centuries of deforestation have left deep marks on the landscape and nature has suffered terribly from the inevitable erosion.

The expansion of the cultivated land has mainly led to an almost total destruction of the many forests that China once had. Forests are now only found in the high mountains. These contain about 2000 tree species.

Southeast China is originally covered with a subtropical rainforest, supplemented with tropical, Pacific and Himalayan elements. The forest is rich in bamboo, but in the mountains bamboo is still sporadic; here you will mainly find conifers, varieties of the laurel and tea family, oaks and magnolias.

The largest subtropical forests in the world, with more than 10,000 tree species, are located in Sichuan Province. Eastern China has monsoon forests.

Central China used to have a temperate, very species-rich rainforest. That rainforest has now been pushed back to temple courts and mountains, richest on cloud slopes, including horse chestnuts, maples, cherry, dogwood, and conifers. Here the curious 'living fossil' Metasequoia was discovered, and the cathaya tree in the border area of Sichuan and Guangxi also belongs to this category.

Another well-known living fossil, Ginkgo biloba, has been preserved as a cultivated plant. The ginkgo is related to the coniferous tree, but instead of needles it has leaves. Until more than 10,000 years ago, they occurred in the entire Northern Hemisphere, but now almost exclusively in China. The oldest ginkgo is about 3000 years old.

Further north, the vast, almost entirely cultivated loess landscape stretches, which originally bore a moderately deciduous forest. Remains of these can only be found in the mountains; this very species-rich vegetation contains many types of conifers and many types of maple, birch, horse chestnut, alder, oak and walnut. Characteristic Chinese trees and shrubs such as Paulownia, Gleditschia and Rhododendron are also common here. 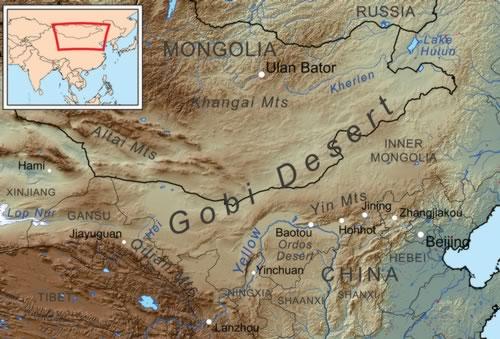 To the north and northwest (Manchuria, Gobi) are steppes and deserts with a sparse vegetation of, among others, wormwood species and the Kalidium gracile used for camel food.

Coniferous Forest Areas are mainly located in the Great Hinggan Mountains of northern China, with larch species and evergreen coniferous species such as fir and pine.

The southwestern high mountains are among the richest flora areas in the world. From low to high, one first distinguishes the subtropical savanna forest up to 1800 meters (sometimes 2800); the lower montane zone (up to 2900 meters) with pine forests and mixed pine-deciduous forests (with oak and chestnuts), evergreen forest, thorn thicket, laurel oak forest and steppe; the upper montane zone (in the south up to 4350 meters, in the north up to 3700 meters) with coniferous forests, Rhododendron thickets and high-spreading grasslands, and finally the very species-rich alpine zone, e.g. in Yunnan and Sichuan, where dwarf shrubs up to 4730 meters high and where, for example, the genus Rhododendron 600 species, primrose 300 species and cartel leaf 210 species are rich.

In the far west of Mongolia and in Xinjiang Uyghur, one finds desert-like vegetation with thorny shrubs and grasses. The main plants are the tamarisk and the saxaul. 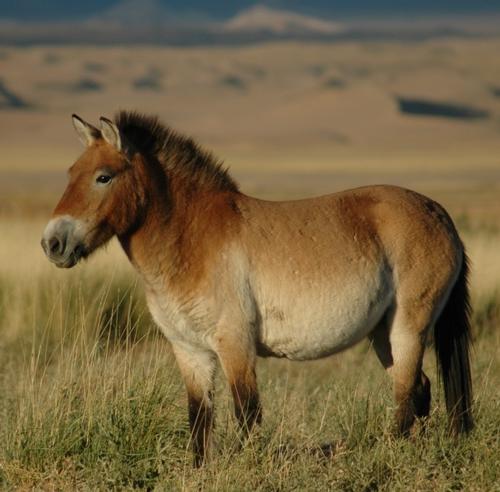 The Chinese fauna includes both Asian-tropical and Eurosiberian elements, and is very varied. About 420 species of mammals, 1200 species of birds, 200 species of amphibians and more than 300 species of reptiles live on Chinese territory.

Overcrowding and agriculture have greatly reduced the animal world, a process that has been going on for many centuries. Few wild animals are found in the densely populated lowlands; even birds have generally become very scarce.

In the mountains and in the more sparsely populated areas you can still find the remains of a once very rich fauna; for example, the number of Indian elephants in China is estimated to be only about 100.

As for large mammals, the famous giant panda or bamboo bear from the western province of Sichuan, the Father David deer, the most likely extinct Chinese flag dolphin of Dongting Lake and its surrounding areas, and some curious monkey species of the genus Rhinopithecus are the most notable. The spoon sturgeon of the Yangzi Jiang and the Chinese / Japanese giant salamander are also worth mentioning. Protected animal species are the Chinese crane and the Yangzi alligator. Of the three tiger species, the Bengal, South China and Manchurian or Siberian tiger, only a few hundred survive.

Northern species like marmots live in high places in the southwest, while in southern places southern species predominate, such as the large Indian civet and the golden-haired monkey. Monkey Island is a island on the island of Hainan, a reserve for about 1000 Guangxi monkeys.

In the north, the fauna is more like that of North Asia, with on the borders the Przewalski horse, the wild camel and the Siberian tiger, both of which are very rare. Unique to this area are the brown ear pheasant and the Reeves pheasant, which has a tail of about two meters in length. Sable martens and sika deer also live here, which are practically extinct elsewhere in China. North of Harbin is a swampy nature reserve, where rare Japanese cranes and white-necked cranes breed.

The deserts of Inner Mongolia and Xinjiang are mainly home to rodents and ungulates, including the saiga antelope.

Located in the southwestern province of Yunnan, the tropical region of Xishuangbanna is home to many animals that have become extinct elsewhere in China, such as Asian elephants, rhinoceroses, tigers, pythons, Malayan honey bears, leopards, green peacocks, and other rare birds, including the hornbill. Tree shrews and gibbons live in the trees of the tropical forests.

Fruits such as kiwis, mangoes, bananas and papayas grow in the hilly landscape. Precious woods such as mahogany, teak, camphor and sandalwood can be found in the forests.

China has approximately 300 national parks and nature reserves and many provincial and local protected areas.

The Wolong Nature Reserve (Wolong Ziran Baohuqu) plays an important role in protecting the giant panda, of which about 200 still live in this reserve. Other endangered species in Wolong include the snow leopard, snub-nosed monkey, musk deer, and red langur.

The Zhalong Nature Reserve (Zhalong Ziran Boahuqu) is a birdwatcher's Eldorado, and was the first Chinese nature reserve. 180 bird species live here permanently or temporarily, including eight of the world's fifteen crane species, six of which are on the endangered species list. Only about 500 specimens of the Chinese crane live in the reserve.

Every year, about 100,000 migratory birds perch in the Bird Island Reserve in Qinghai Province, including geese, cranes, vultures and the Mongolian lark. The nearby Longbao Reserve plays an important role in the conservation of the black-necked crane.

The Changbaishan nature reserve in the Jilin province near the North Korean border is still about 200,000 hectares of virgin forest, including the raw birch, the Korean pine and the dragon fir.

Near Nanning, along the Vietnamese border, is the Longrui Nature Reserve (Longrui Ziran Baohuqu), which is home to the world's only population of white-headed langur. The very rare gold-colored camellia also grows in this area.

Tibet is the land of the yak, a type of cattle that is well adapted to high altitude and bitter cold. 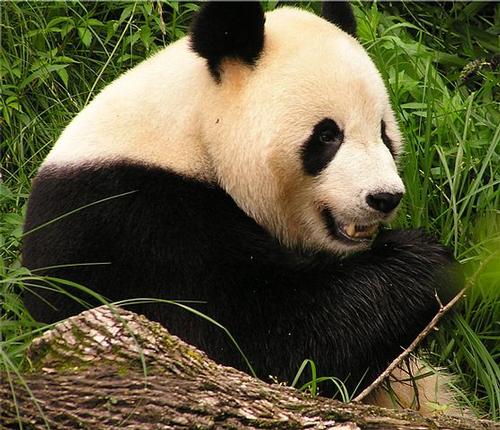 The giant panda is one of the most endangered mammals on the planet. It is believed that about 1000-1200 specimens are still alive, and that is actually too little to allow the species to survive over time. The giant panda lives mainly in Sichuan province, but also in Gansu and Shaanxi, and then only in nature reserves.The first living giant panda was only discovered in 1896. The animal preferably lives at an altitude of 2000-3000 meters and eats a special type of bamboo. The special Father David deer was discovered in 1865 by the French priest-zoologist Père Armand David. At that time, the animal only lived in the imperial hunting parks. Around 1900 the species was even extinct in China, only a herd was bred in Woburn Abbey, England. In 1985 20 copies were offered to China and released at Chengdu. 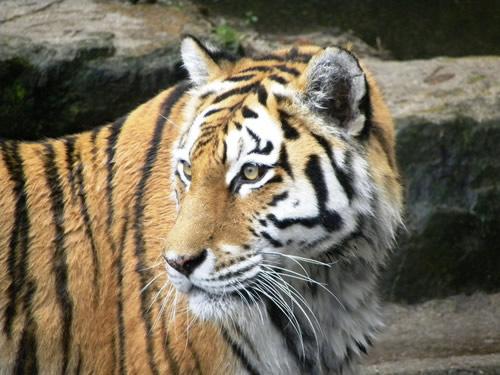 As in many other countries, the tiger in China is almost extinct in the wild. Chinese tigers are tried to lure as much as possible to nature reserves and animal parks, in order to save them from extinction.

The only native tiger of China is the Chinese or Amoy tiger. It is believed that about 30 live in the wild and about 50 in captivity. This species is said to still occur in Hunan, Fujian, Guangdong and Jiangxi provinces.

The largest tiger in the world is the Siberian tiger. In addition to China, this species also occurs in Russia and North Korea. About 500 specimens still live in the wild and about 1000 specimens in zoos and reserves.

The Bengal or Indo-Chinese tiger is almost extinct in China and only lives in reserves in Xishuangbanna in Yunnan province. About 1500 copies still live in Vietnam, Myanmar (Burma), Laos and Thailand.