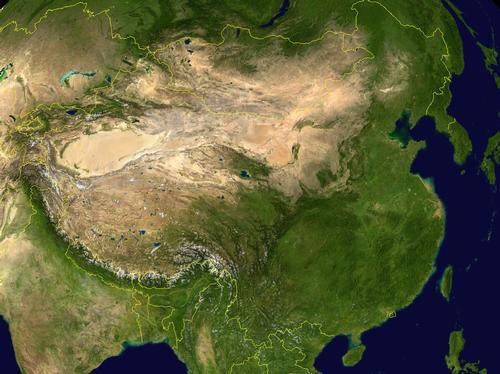 The longest straight distance is over 5000 kilometers! The total length of all China's borders is over 22,000 kilometers and is divided as follows:

More than three thousand islands lie off the coast of China, of which Hainan, located in the South China Sea, is the largest. The island is regularly ravaged by typhoons, especially from May to October.

Mount Everest in Tibet is the highest mountain in the world with an altitude of 8848 meters, the Turpan Depression in the northwest, at 154 meters below sea level, is China's lowest point. More than a hundred peaks in China are higher than 7000 meters and more than a thousand higher than 6000 meters.

The Gobi (Gebi Shamo) and the Takla-Makan are deserts that interrupt the great plains to the north.

Much of China regularly suffers from earthquakes that are sometimes very powerful. The earthquake zone stretches from western Sichuan to the Bo Hai, a northern arm of the Yellow Sea. 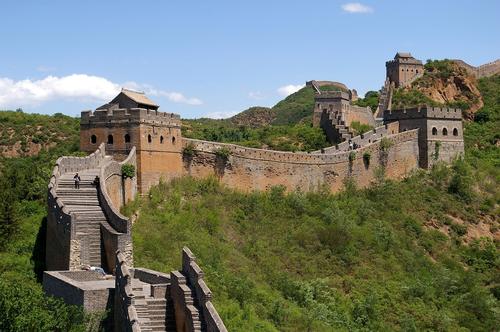 Two-thirds of the Chinese land area is mountainous or hilly or highland. The landscape of China is terraced in structure. The Qinghai-Xizang Plateau averages 4,000 meters ("Roof of the World") above sea level and includes the provinces of Tibet (Xizang), Qinghai and western Sichuan. This plateau is the highest plateau. Almost all major rivers of China and Southeast Asia have their source here.

The second plateau ranges in height from 1000-2000 meters and includes the Tarim Basin, the Mongolian Plateau, the Loess Plateau, the Red Basin, and the Yunnan-Guizhou Plateau from north to south.

The lowest terrace (up to 500 meters high) consists of plains and the lowlands along the lower reaches of the major rivers. This strip of land runs from north to south along the coast of China. Most industry and agriculture take place here and more than 65% of the Chinese population lives here.

The coastal region of China has a total length of about 5570 km and is mountainous in the south, rich in islands and highly articulated, as well as the Shandong peninsula. The best ports are therefore found here.

Larger inlets of the coast are the Waves of Liaodong and Bo Hai, the Yellow Sea (Huang Hai), the bays of Jiaozhou and Hangzhou and the Gulf of Tonkin. Numerous islands include, except Hainan and Taiwan (Formosa), the Zhoushan Islands for Hangzhou Bay and the Miaodao Islands for the entrance to Bo Hai Gulf. 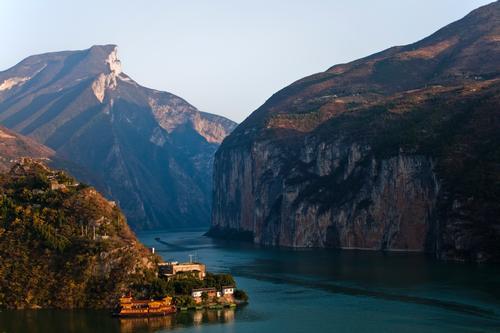 In total, China has about 5000 rivers, almost all of which flow eastwards and then flow into the Pacific or Indian Ocean. The total length of all rivers together is approximately 225,000 kilometers, of which more than 100,000 kilometers are easily navigable. Unlike the rivers in the north, the southern rivers never freeze.

Many rivers deposit large amounts of silt, forming deltas that expand further south. Fertile delta areas have been created here with a very high population density. Million cities such as Canton, Shanghai and Tianjin lie in these areas.

The two largest rivers in China are the Huang He or Yellow River (4845 km) and the Yangzi Jiang (5200 km). The Yellow River is notorious for its floods, which are largely caused by large-scale inland deforestation, making water management in the river's basin almost impossible to control. Due to large silt deposits (approx. 1.5 billion tons per year), the river bed has in some places even been placed above the surrounding land and the lower reaches of the river have been regularly displaced, so far more than 25 times. More than 100,000 kilometers of dikes must ensure that the river does not constantly overflow its banks. In the past 2,000 years, the river has been flooded about 1,500 times, and is therefore also referred to as "China's concern". Due to the very large amounts of fertile soil (loess) that is transported by the river to the sea, the river has been given the name 'Yellow River'.

The Yangzi Jiang does not have such a disastrous influence on the landscape and with its wide-branched system of tributaries it is of much greater significance for shipping. After the Amazon and the Nile, the Yangzi Jiang is the longest river in the world. About 700 tributaries drain the area of nearly 2 million km2. That is, almost 20% of China's territory - and a quarter of the land suitable for agriculture. In the north, the Yalong Jiang, Jialing Jiang, Min Jiang and Tuo Jiang are the main tributaries, in the south Wu Jiang plays a major role. From the delta north of Shanghai, the river for sea-going ships is navigable up to Wuhan, which is almost 1000 kilometers upstream. Along the lower reaches, known as Yangzi, the river flows through most of the major industrial areas and past centers producing silk, embroidery, lacquer and wood carvings.

Major rivers in the north are the Songhua Jiang, the Heilong Jiang or Amur (border river with the Soviet Union), the Yalu Jiang (border river with Korea) and the Xiliao He. The northern rivers have large differences in their water level, depending on the seasons. In the summer the rivers swell enormously and in the winter there is not much more left than a small stream. In the summer of 1998, China experienced the worst flooding of the Jangtzi Jiang River since 1954, affecting an estimated 240 million people. Millions of people had to flee their homes and at least 2000 people - possibly many more - died.

To the south, Xi Jiang (1600 km) with its tributaries is of regional significance. The Yarlungzangbo, which flows eastward across the Qinghai-Tibet plateau and finally flows into the Bay of Bengal as the Brahmaputra, is the highest river in the world.

Inland rivers are mainly found in the dry northwest. These rivers irrigate one third of the total territory of China. They are fed by glaciers and snow and therefore dry up regularly. Most of the inner rivers contribute to the vast underground water reservoirs that lie beneath the desert regions of North and Northwestern China. With 2137 kilometers, the Tarim is the longest inland river in China.

Because most rivers run from east to west, a channel system has been developed over the centuries to steer the flow of goods from north to south in the right direction. The Grand Canal, the longest man-made waterway in the world, was already built during the Sui Dynasty (589-618) and connects Hangzhou to Beijing over a length of 1700 kilometers. Some parts of the network of channels date back nearly 2,500 years. The average width of the channel is 30 meters. The section between Beijing and Tianjin has dried up completely and other sections are not navigable.

In total, China has approximately 2800 lakes, half of which are filled with salt water. Eastern China has a large number of lakes, of which the Poyang Lake (2800 km2) and the Dongting Lake (4800 km2) are the largest. These lakes are located in the Yangzi Plain and the Qinghai-Tibet Plateau.

The lakes in the northwest of the country are mainly located on high plains and are usually water collection points in drainless areas, with strongly varying water levels and high salinity. The largest is Qing Hai or Chöch nuur (Western Sea), with 4800 km2. Lop Nor, the second largest salt lake in China, is located on the east side of the Tarim Basin. Lop Nor covers approx. 2570 km2 and has changed place, shape and depth over the past millennia. Around this mysterious lake there are many sand dunes and white salt pans.

Taihu Lake in eastern Jiangsu Province covers an area of 2,400 km2, making it one of the largest freshwater lakes in China. The lake has about 90 islands and the lake is used for duck and goose cultivation, water chestnuts and lotus flowers are cultivated and fish and lobsters are caught. 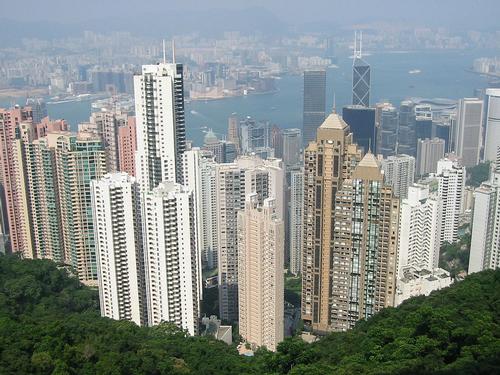 On June 16, 1843, Hong Kong officially became an English crown colony. On July 1, 1898, the British were loaned to Hong Kong for 99 years. On December 19, 1984, the English and Chinese governments signed the so-called "Joint Declaration". It stated that from 1 July 1997 China would regain control of Hong Kong in the sense that Hong Kong will continue to exercise self-government as a Special Administrative Region. The Chinese government also guaranteed economic, social and legal autonomy for all of Hong Kong for 50 years. 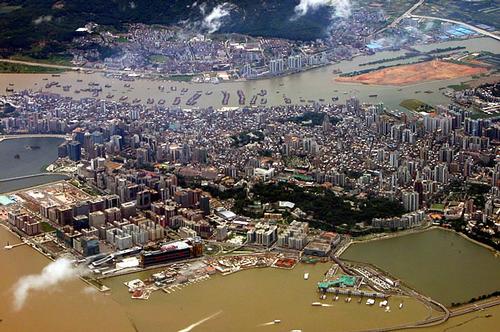 Macau is a small, four-kilometer long peninsula, which is located on the west side of the Pearl River and is connected to mainland China. Macau also consists of the two islands of Taipa and Coloane. Macau has about 500,000 inhabitants, of which still about 15,000 Portuguese.

Macau was discovered in 1513 by the Portuguese explorer Jorge Alvarez. The Portuguese colony of Macau was founded in 1557. Since February 17, 1976, Macau had self-government under Portuguese sovereignty. Since December 20, 1999, Macau officially belongs to the People's Republic of China after 443 years. Until 2049, Macau retains a separate status with far-reaching political autonomy. 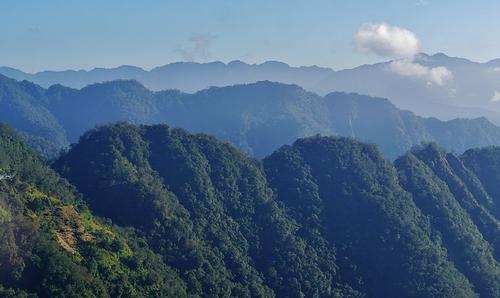 Taiwan (Republic of China or Nationalist China) used to be called (Ilha) Formosa, the "beautiful island". The island state is located 160 kilometers southeast of China and has a total area of 35,563 kilometers. Taiwan has approximately 21.5 million inhabitants, of which approximately 90% live on a narrow strip of fertile soil on the west coast. The capital of Taiwan is T'ai-péi; other major cities are Kau-shieng, T'ai-Chong and Tainan. The climate of Taiwan is generally subtropical. The islands of Matsu, the Pescadors, Pratas and Quemoy are controlled by Taiwan.

Based on historical grounds, the government of Taiwan, Republic of China (ROC) has long regarded itself as the legitimate driver of all of China (the island of Taiwan and the mainland). The People's Republic of China (PRC - mainland China) has a different view and views Taiwan as a rebellious province within the PRC. In doing so, China is the international leader: few countries officially recognize Taiwan and have diplomatic relations with the country; Taiwan is also not officially a member of the United Nations. Taiwan is gradually realizing that an island nation is the most feasible, and for that the government has implemented a number of constitutional reforms. 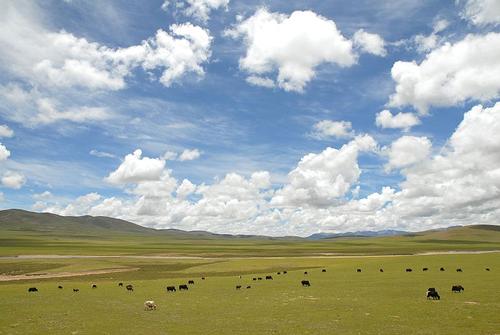 The very mountainous Tibet (Chinese: Xizang) is located in Western China, has an area of 1,221,600 km2. Tibet borders India, Nepal, Sikkim, Bhutan and Myanmar (Burma). About 2.37 million people live in Tibet, including about 1.7 million Tibetans. The total number of Tibetans is estimated at 6 million, most of them living in Qinghai, Sichuan and Yunnan provinces. Many exiles live in neighboring countries India and Nepal.

In 1280, under the Mongol Kublai Khan, Tibet became connected with China. In the 17th century, the unified Tibet regained independence, but in 1720 Tibet was again subject to the Chinese emperors.

In 1904, the British invaded Tibet, and in 1913/14, a conference in China determined that Tibet would become an autonomous state under Chinese sovereignty.

On March 10, 1959, the spiritual and political leader of Tibet, the Dalai Lama, fled. From Dharamsala in northwestern India, he formed an exile government and from there traveling the world through the Tibetan cause.

In 1965, Tibet officially became an autonomous territory within the People's Republic of China. At the end of 1987 there was a major uprising, which was however crushed by the Chinese army. The repression of the Tibetans is still continuing at this time and a solution does not seem to be yet to come. The 1989 award of the Nobel Peace Prize to the Dalai Lama was a tremendous boost for the Tibetan people.