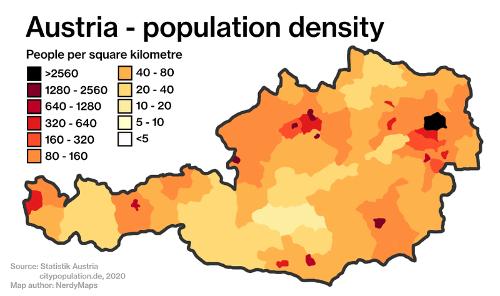 The Austrian people originated from many ethnic groups: Illyrians, Celts, Germans, Slavs, Hungarians and others.Austria has 8,754,413 inhabitants in 2017 and a population density of approximately 104 inhabitants per km2. Most (60%) of Austrians live in the big cities. In the capital Vienna with 1.9 million inhabitants, even more than 20% of the total population lives. The cities of Graz, Linz, Salzburg and Innsbruck have more than 100,000 inhabitants. Rural depopulation is proceeding at a rapid pace. Young people in particular are moving to the big cities because of industrial development and tourism. A job is easier to find there than in the countryside. The current population growth is mainly caused by a positive migration surplus and only secondarily by a birth surplus. Population growth was 0.47% in 2017. The average life expectancy in 2017 was 81.6 years, men 78.9 and women 84.4 years.