Somalia is located in East Africa on the Gulf of Aden and the Indian Ocean east of Ethiopia. Somalia also borders Djibouti and Kenya. The surface area of Somalia is 637,657 square kilometres. 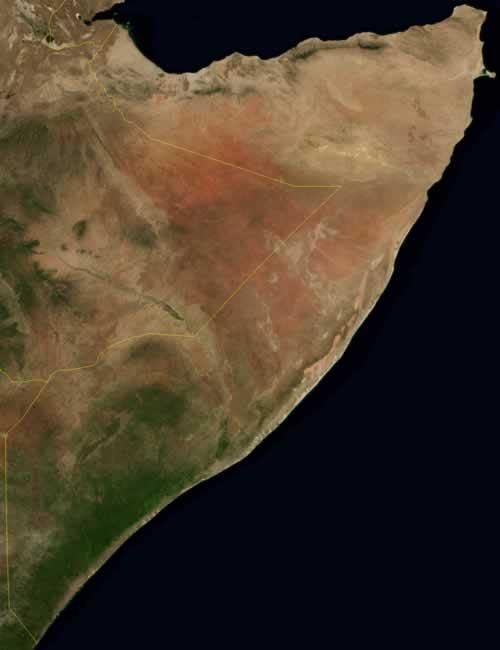 The coastline of Somalia is about 3000 km and has large long white sandy beaches. The part of the Indian Ocean from Mogadishu to the border with Kenya has one of the longest coral reefs in the world. The north of the country is mountainous, there is little vegetation and agriculture is impossible. The largest part of the country, the south and west, is hilly and has many waterless plains.

A large part of the country consists of dry savannahs and is not suitable for agriculture. Only 2% of the total territory is cultivated. The largest fertile areas are those along the two rivers, the Giuba or Jubba and the Scebeli, both of which flow into the Ogaden in Ethiopia.

Somalia has mainly a desert climate. There are two rainy seasons, from March to June and from September to December. However, the rain is not very heavy. The south receives the most rain (300-500 mm per year). Drought is therefore one of the biggest problems for Somalia and the surrounding countries. Temperatures can reach 42 ºC on the northern coast.

Although most of Somalia is dry and desert-like, it does have a rich collection of tropical plants. In Somalia, the following are found: acacia, baobab, eucalyptus and palm.

The national tree of Somalia is the Commiphora Myrrha, from which myrrh is tapped.

Most of the animals live in the south along the two big rivers. Here it is possible to see the elephant, lion, rhino, giraffe, zebra, cheetah, buffalo, leopard and hippo.