Ethiopia is located in East Africa. Ethiopia lies exactly between the equator and the Tropic of Capricorn. Ethiopia borders Sudan to the west, Eritrea to the north, Djibouti and Somalia to the east and Kenya to the south. 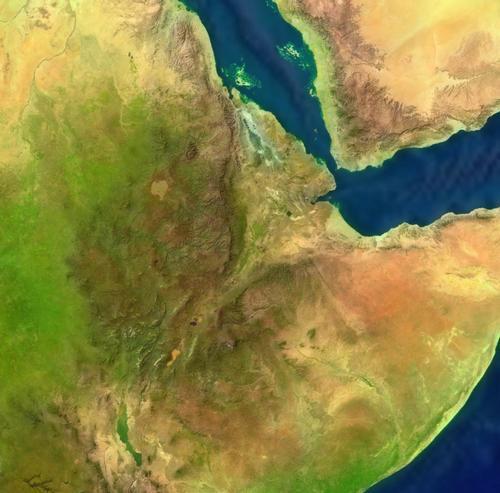 From a landscape point of view, Ethiopia can be divided into four parts: The northern central massif (Abyssinia), the Choa Plateau, the southwest and the lowlands in the west and northwest. There is also a lot of variation in the landscape. There are massive rock formations with enormous table mountains (amba), steep massifs, deep canyons, volcanic cones, golden savannahs and rolling plains. From the mineral-rich Danakil Desert (120 metres below sea level) to the snow-capped peak of Ras Dashen (4620 metres high), Ethiopia's relief is diverse. The Blue Nile (in Lake Tana) rises in the Ethiopian highlands and together with the White Nile and the Tekeze River, which also rises in Ethiopia, it forms the Nile.

Ethiopia has mainly a tropical monsoon climate. There are, however, many local differences, mainly because of the variation in altitude. The average annual temperature in the tropical lower regions is 30 degrees Celsius. In the mountain areas, however, it can be 5 degrees. The rainy season is from June to August.

The vegetation in Ethiopia is extremely diverse. In the dry areas, you only find plants that need little or no water. In the high plains, there is a lot of rain and it is very cool there. But the higher you go, the fewer plants you encounter. Only mountain plants can survive on Ethiopia's immense mountains. Common vegetation in Ethiopia are: aloe, pine, eucalyptus, juniper, olive, tamarind and fig.

Ethiopia has many endemic species such as the walia ibex, the Simenvos, the bergnyala, the gelada, the wild Somali donkey and the Ethiopian nyala. There are also many endemic species among the birds. You can also see the baboon, kudu, lion, hippo, panther, oryx and zebra.