Eritrea is located in East Africa. Its entire coastline covers approximately 1,200 km and lies on the Red Sea. Eritrea lies in the horn of Africa and borders Ethiopia to the south, Djibouti to the south-east and Sudan to the north and west. The Dahlake Islands in the Red Sea are also part of Eritrea's territory. The surface area of Eritrea is 121,320 square kilometres. 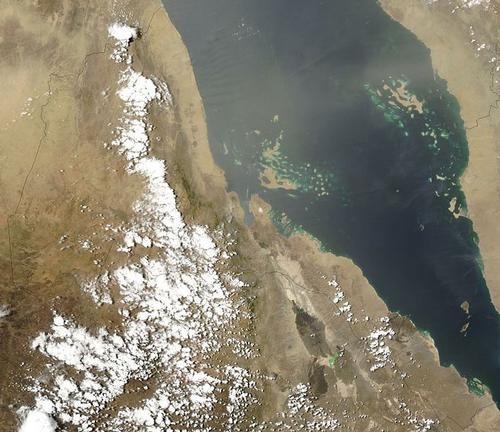 Eritrea consists of ten provinces situated in four geographical zones. The first zone goes up from Djibouti and is no more than a long strip of desert. The middle and northern parts (about 30% of the entire country) form the highlands and have an average altitude of 1500 m. The highest point is in the south of Asmara, the capital, and has an altitude of 2591 m. To the west of the highlands lies the fertile lowlands, which consist mainly of flat areas. The fourth zone is in the north and includes rugged mountainous landscapes. The highest point in Eritrea is the summit of Mount Soira at 3018 metres above sea level. The lowest point is near Kulul in the Danakilde depression. 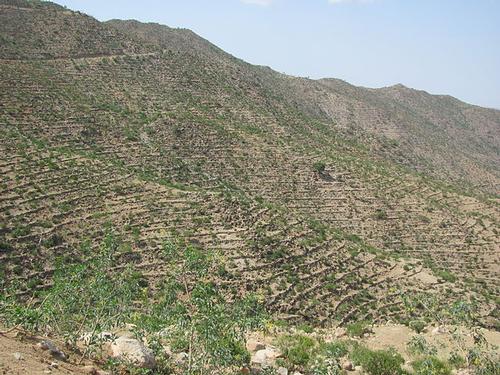 Terrace mountains in EritreaPhoto: Reinhard Dietrich in the public domain

Eritrea has a hot dry desert strip along the coast. It is cooler and wetter in the Central Highlands. Rain falls between June and September (500-650 mm per year except in the very dry coastal strip (less than 400 mm per year). Temperatures range from 40 degrees on the coast in summer to around freezing in the mountains in winter.

In Eritrea there are lion, leopard, cheetah, zebra, jackal, giraffe and hippopotamus. There are also many large antelopes and smaller antelopes such as the gazelle. The east of Africa is one of the places with the most bird species in the world. The total number of different bird species is 1300 and it is possible to see about 100 different species per day. Reptiles and amphibians are also common. There are also countless insects to be found.