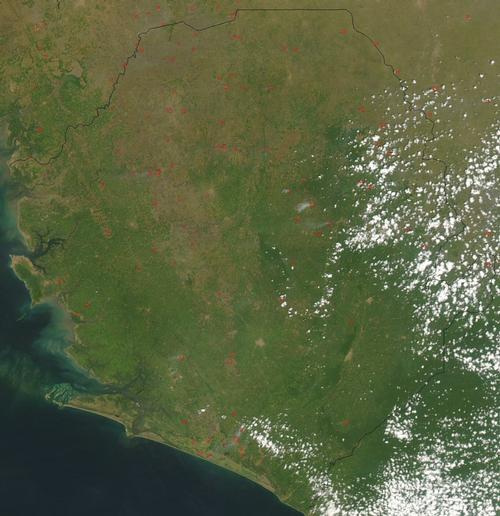 On the coastline of Sierra Leone there is a hilly area with hills of about 450 metres high. About 25 to 35 percent of the land consists of savannah and grassland. This area is mainly situated in the north of the country. The rest of the country consists of forest and rainforest. 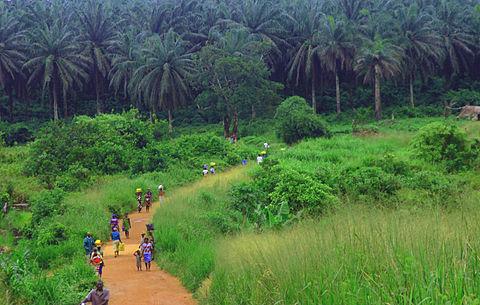 Landscape in the southeast of Sierra LeonePhoto: Lindsay Stark CC BY 2.0 no changes made

Sierra Leone consists of plateaus that descend gradually from the northeast towards the sea and are composed of granite and shale, among others. They average about 450 m in height, with some peaks approaching 2000 m. The plateaus give way to a strip of lowland about 50 m above sea level. Mangrove forests stretch out along the coastal plain, with creeks and lagoons; the only elevation is the approximately 60 m high hills of the peninsula on which Freetown lies. Off the coast are the Banana Islands, the Turtle Islands and Sherbro.

Sierra Leone has a tropical monsoon climate. The rainy season starts in June and lasts until October. The amount of precipitation varies strongly per region, from 1900 mm to as much as 6350 mm in the Guma Valley, on the coast near Freetown. During the dry winter months, there are dust storms from the Sahara, the Harmattan. Temperatures exceed 25°C throughout the year in almost all of the country.

On the coast there are swamps, inland there is forest and also savannah. The following plants, trees and crops are found in Sierra Leone: cocoa, groundnut, coffee, mahogany, maize, mangrove, palm, rice and teak. The national tree of Sierra Leone is the palm tree.

The forest fauna in particular is very rich and includes numerous monkeys and relatives (16 species, including 12 monkeys and the chimpanzee) and antelopes (for example, 8 species of duikers). The bird world is also very rich. Furthermore, there are buffaloes, crocodiles, hippopotami and elephants. The national animal of Sierra Leone is the lion.