Panama is located in Central America. Panama borders both the Caribbean Sea and the northern Pacific Ocean and lies between Costa Rica and Colombia. The surface area of Panama is more than 78,000 square kilometres.

Due to its long coastlines, Panama has many beautiful sandy beaches. The many islands and islets on both sides of the isthmus should also be mentioned here. The most important are the Archipelago of San Blás and Bocas del Toro in the Caribbean Sea. There are also Coiba and the Pearl Islands off the southern coast.

The Panama Canal is 80 km long and divides Panama into an eastern and a western part. Along the coast and between the mountains in the central part of Panama there is lowland. Tropical rainforest is located in the canal zone. Politically the whole Panama belongs to North America. Coastal areas are flat but inland areas are mountainous. At 3477 metres, El Volcán Barú is the highest point in the country. 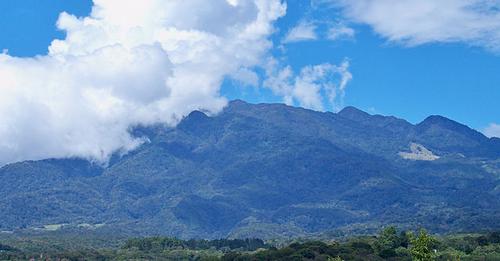 Panama is a tropical country. Because Panama is close to the equator, there are only two seasons. The dry season, from January to mid-April, and the rainy season from mid-April to December. The rainfall in the north is twice as much as in the south. It does not rain constantly, but there are short, heavy showers, often accompanied by a strong storm. The change of seasons makes little difference to the temperature. The temperature throughout the year is between 21° and 35° in the lowlands and between 10° and 18° in the mountains.

The vegetation is diverse, with tropical rainforest in Darien and along the canal, grassland along the south coast, forests in the mountains and mangrove forests along the coasts and on the islands. Common plants in Panama are: banana, bromeliad, cactus, liana, mahogany, mangrove, orchid, palm.

The national flower of Panama is the holy spirit orchid, and the national tree is the Sterculia apetala or Panama tree.

Animals from both continents can be found there. There are many different birds living in Panama, and also the migratory birds that visit the country when they migrate from one continent to the other. A total of 940 different species have been counted. Among the mammals that inhabit Panama are jaguars and pumas. These animals need a large unspoilt area in order to survive. Tapirs, sloths, spectacled bears and monkeys also live here. Crocodiles, caimans, sea turtles, whales, dolphins, sharks and many other kinds of fish swim in the water.

The national bird of Panama is the harpy.