Niger is located in West Africa between Algeria and Nigeria. Niger is completely landlocked. It also borders Libya to the north, Chad to the east, Benin to the south and Burkina Faso and Mali to the west. The surface area of Niger is 1,267,000 square kilometres. 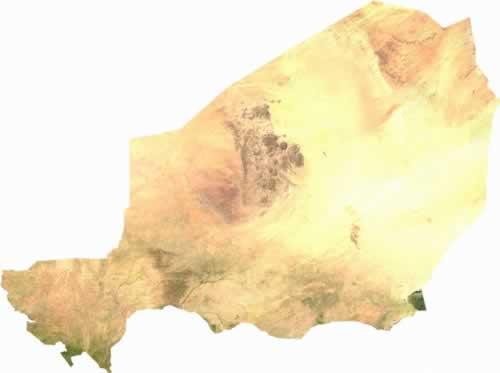 In the north of Niger is the Sahara desert. There are some mountains formed by volcanic activities, like the Aïr or Azbine Mountains, with peaks like the Greboun (ca. 2000 m). In the far north-east lies the Tchigai highlands (up to 1100 m). South of this, the land is low; here lies Lake Chad. In the southwest of Niger is the valley of the Niger River. The south of the country around the Niger River has savannah vegetation of grass with scattered trees. However, most of the vegetation in the south consists of dry grasses. In the Aïr Mountains there is enough rainfall for grasses and shrubs to grow. The northern desert consists largely of sand dunes.

The Blue Mountains, blue in colour due to the grey-green rocks, are isolated by the Sea of Dunes of Erg from the actual massif in the north-eastern part of the Aïr massif. The highest point is 924 metres. The Aïr and Ténéré National Nature Reserve is a UNESCO World Cultural Heritage site. 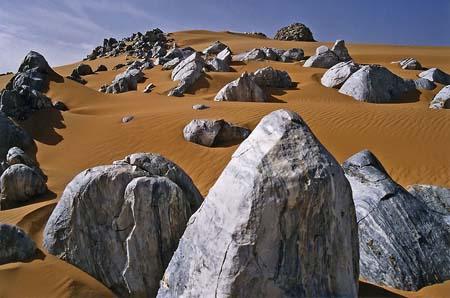 Blue Mountains, NigerPhoto: Jacques Taberlet CC BY 3.0 no changes made

Niger has a dry, hot desert climate in 2/3 of the country and a tropical climate in the south. In Niamey, the country's capital, there is an average of about 590 mm of precipitation per year. The temperature varies greatly. From 15 ºC in December to 42 ºC in April. In Agades, in central Niger, there is only 180 mm of rainfall on average per year. The rainy season lasts from June to October.

Plant growth is strongly determined by the decreasing amount of rain to the north. Savannahs grow in the south. To the north, these pass through the Sahel into the desert region of the Sahara. Common species are: acacia, baobab, eucalyptus, euphorbia, mango, palm and tamarisk.

The animal world has both desert and savannah influences. Gazelles, addax, and algazel are representatives of the desert fauna. Savannah elements include the African elephant and numerous antelopes. Other animals that can be found are: buffalo, giraffe, camel, lion, hippo and panther.