Namibia consists of three landscapes. Firstly, the Namib Desert on the coast and more to the north the Brandberg Mountains with the highest peak, the Königstein (2573 m).

Finally, in the east, there is a desert area gradually descending from the plateau, the Bismarckberge, an offshoot of the Kalahari Desert. 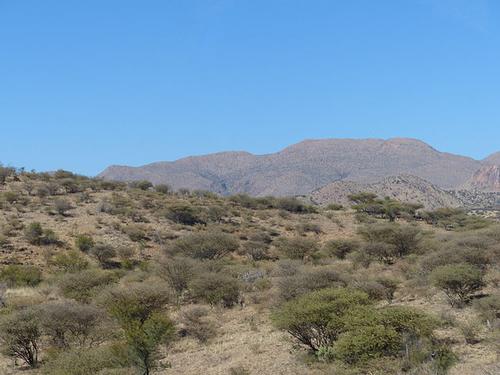 Except along the long Atlantic coastline in the west, there is not much water in Namibia. Most rivers that flow towards the ocean run dry for part of the year and sometimes do not reach the sea. Important rivers that do flow throughout the year are the Kunene, along the Angolan border, and the Orange River, which forms the border with South Africa. A tributary of the Orange River, the Nossob, is the most important river in the country.

Namibia has mainly a desert climate. The entire country is very dry. In the southern coastal regions, no more than 150 millimetres of rain fall per year. The most rain falls between January and April. Because Namibia is in the southern hemisphere, December is the hottest month. On average, it reaches 30 degrees in the country, with peaks of 45 degrees in the Kalahari and Namib Desert. It can also freeze in the desert at night.

The largest part of Namibia is not very richly vegetated. Most of the afforestation is in the north-eastern Caprivi strip and along the rivers. In the rest of the country, the vegetation is more like a savannah. Yellow-brown vegetation alternates with aloes and cacti. Common species are: acacia, oak, euphorbia, grass, nara, palm, quiver tree and the special welwitschia.

The southern steppes, savannahs and semi-deserts are home to a huge number of animals. Giraffes, oryx, elephants, lions, zebras and cheetahs, among others, can be found here. There are a large number of game parks in Namibia. The Namibian government wants the parks to run into each other as much as possible, through enlargement and wildlife corridors.