Mongolia is located in northern Asia between China and Russia. These are also the countries with which Mongolia borders. The surface area of Mongolia is 1,565,000 square kilometres. 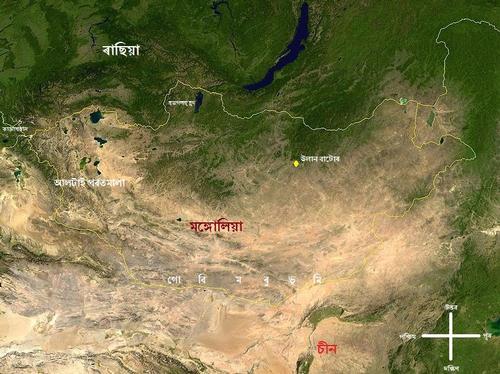 Mongolia is one of the most elevated countries in the world. It lies on average 1580 metres above sea level.

In the centre and north of Mongolia there are many mountains, the Khangai Mountains and the Mongolian Altai Mountains. Northeast of the capital Ulan Bator lies the mountain range of Khentti Nuruu, which are the highest mountains in the east of the country. Mongolia has many lakes with salt or fresh water. In the southern and central part lies a part of the Gobi Desert. From the Bogd Khan one looks over the capital UlaanbatorPhoto:Bogomolov.PL in the public domain

Mongolia has many lakes with salt or fresh water. The most popular lake is the Khovsgol Nuur, a freshwater lake that contains two per cent of the world's supply of freshwater. This lake is located in the far north of Mongolia, close to the border with Russia.

Mongolia has a continental (desert) climate with sharp seasonal and day/night variations. In winter, temperatures can drop to fifty degrees below zero in the cold north. In the summer, it can be forty degrees above zero in the south. The average temperature in Mongolia in summer is about fifteen degrees. The rainy season is in July and August.

Mongolia consists mainly of grassland, forests and desert. Just over half of the land is covered with grass, which is used to graze herds of goats, sheep and yaks. One eighth of the land consists of forest, mainly coniferous and birch. One third of Mongolia is desert. The deserts are not large expanses of sand, but consist of desert plants. The Gobi Desert covers a large part of southern Mongolia.

There are many wild animals in Mongolia, some of which are tamed into herds by nomads. The main animals are sheep, goats, camels, horses, yaks and cattle. At the edges of the country you can occasionally find herds of reindeer.

In early 2007, the Mongolian Biological Institute and the World Wildlife Fund conducted a census of saiga antelopes, a critically endangered stepping stone animal of Mongolia and Central Asia. The counters spotted around 1700 saigas. After calculations, the researchers concluded that there must be about 2800 saigas in Mongolia, a 50% increase since 2006.