There is a single-chamber Parliament with 65 members, 53 of which are directly elected and 12 are elected from regional governments. The term of office for Members of Parliament is five years. The highest legal institution is the Court of Appeal. 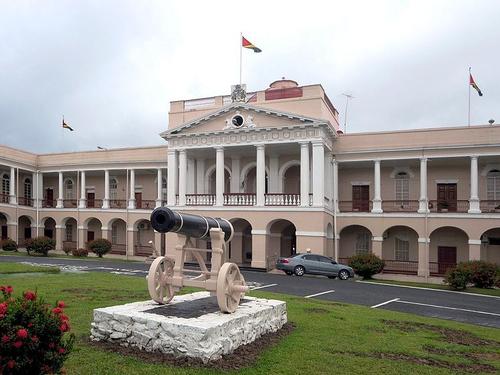 In addition, there is also local government. Guyana is divided into ten districts (Barima-Waini, Cuyuni-Mazaruni, Demerara-Mahaica, East Berbice-Corentyne, Essequibo Islands-West Demerara, Mahaica-Berbice, Pomeroon-Supenaam, Potaro-Siparuni, Upper Demerara-Berbice, Upper Takutu- Upper Essequibo). These districts each have their own administrative body, the Regional Democratic Council. It is elected for a period of five years and four months, but may be dismissed by the President if desired.

Guyana has been a republic since 1970, with the President as the highest authority. The President is appointed from the party that received the most votes in the elections. He may hold or replace, as the case may be, the National Assembly.

Replacing the president requires more effort. The President may only be removed from office if he is ill, violates the Constitution, or is charged with wrongdoing.

Political unrest remains in Guyana despite the institutional improvements of the past decade. For a long time, the December 1997 election results were contested by the opposition party PNC (of which mainly Afro-Guyanese are members) and the new election results have also sparked a new outbreak of violence.

Ethnic conflicts have played an important role in Guyanese society since the 1960s. Racial riots involved a great deal of violence and material damage worth millions of dollars.

In February 2002, ethnic disturbances arose again as a result of the release from prison of Afro-Guyanese Andrew Douglas. The Afro-Guyanese in the country feel politically and economically disadvantaged in the mainly Indo-Guyanese oriented society, which has made Douglas a folk hero for the Afro-Guyanese. Since his escape, at least ten Indo-Guyanese have been killed and a number of police officers have been murdered. The president is powerless because the Afro-Guyanese people give Douglas massive support. The murder of two Afro-Guyanese protestants by the police in the same year has sharpened the ethnic conflict. Ethnic-inspired violent disturbances erupted several times, particularly in and around Buxton. In July 2002, violence escalated during the 23rd CARICOM meeting in Georgetown. In 2003, the government of Guyana was able to restore peace by deploying the police and the army. According to some in Guyana, the government allegedly used death squads, which would have eliminated the instigators of the disturbances. There is currently no evidence for this. It is certain, however, that the actions of the army and the police have been accompanied by a great deal of violence.

Rising trafficking and drug use is seen as another cause of the increasing violence. The government, in collaboration with the OAS 'Inter-American Drug Abuse Control Commission' has formulated a so-called 'National Drugs Strategy Master Plan' with five main objectives: inventory reduction; demand reduction; control measures; institutional restructuring; and an evaluation function. In addition, a 'National Anti-Narcotic Commission' has been established to implement the stated objectives. Despite these ambitious plans to combat drug trafficking and drug use, both are only increasing. Due to the economic, political and social situation and the inability of Guyana to keep the drugs outside the borders, a lot of cocaine enters the country. There is insufficient cooperation and trust between the Customs Anti-Narcotics Unit (CANU) and the police. In addition, money is laundered on a large scale from drug trafficking, arms and human trafficking and corruption and fraud. Political instability, inefficient government, an internal security crisis and a lack of resources make it difficult for Guyana to control this situation. Many Indo-Guyanese object to the ethnic composition of the police and military and consider reforms necessary.

The current political situation is described in the chapter on history.

In 1989, the then President, together with the World Bank and the IMF, launched an economic recovery program, which has significantly diminished the government's role in the economy, attracted foreign investment, cleared the government of arrears and 15 out of 41 state institutions have been sold. As a result, the economy grew strongly in the 1990s with the mining sector as the main driver of growth. Since 1998, the economy has stagnated due to continued political uncertainty, declining private sector investment, disappointing growth in the mining and agricultural sectors, and Guyana's lack of success in developing new industries. In 2003 the economy contracted by 0.6%. Although rice and bauxite production increased, sugar and gold production fell. The financial services sector is a growth sector. Guyana Telephone and Telegraph, the only telecommunications provider, is also continuing to grow.

Although debt obligations are eased in the context of Guyana's qualification for E-HIPC (World Bank / IMF's initiative for Enhanced Heavily Indebted Poor Countries), external debt remains high. With the released funds of the recently agreed debt relief, the government wants to stimulate investments in infrastructure and increase social expenditure for poverty alleviation. The IMF, together with the World Bank, supports strategies developed by Guyana in a so-called 'Poverty Reduction Strategy Paper' (PRSP). This is developed by the government in consultation with citizens (including the poor) and other development partners. The PRSP describes the macroeconomic, structural and social policy over a three-year period. Structural reforms and fiscal improvements are expected in Guyana for the coming period. Development assistance programs are being continued, mainly with support from the EU and the Inter-American Development Bank.

Trade with the EU is currently supported through special tariffs. Guyana and other Caribbean countries fear that with the opening of the EU market for rice they will no longer be able to compete with Asian countries. The same applies to the production of rum, which suffers greatly from the supply of high-quality alcohol from Asia.

Guyana has been doing very well economically in recent years, with growth rates of around 5% in 2010, 2011 and 2013. Guyana benefits from the good price of gold, which has become the main export product. Nevertheless, a large part of the population lives below the poverty line. GDP per capita is $ 8,100 per year (2017).