Guinea-Bissau is located in West Africa and borders the Atlantic Ocean and lies between Guinea and Senegal. The surface area of Guinea-Bissau is 36,125 square kilometres. 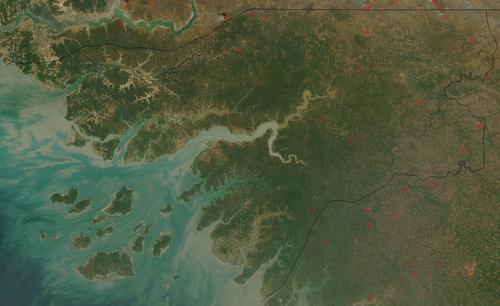 Originally, Guinea-Bissau had a lot of relief, but this has disappeared due to erosion. Inland, there are grassy banks and near the border with Guinea there are hills. On the south-eastern border, the Fouta-Djallon mountains can be found with an altitude of up to 300 m. The strongly fragmented coastal plain is characterised by wide funnel-shaped estuaries and flooded river valleys.

The main rivers in Guinea Bissau are the Rio Cacheu, the Rio Mansoa, the Rio Géba and the Rio Corubal. All three rivers contain salt water. The flood waters can push up to 100m inland and cause a tidal range of 7m. As a result, several areas are regularly flooded. Despite this potential flooding, the coastal area is densely populated. Between the coast and the savannahs in the east there is tropical rainforest. 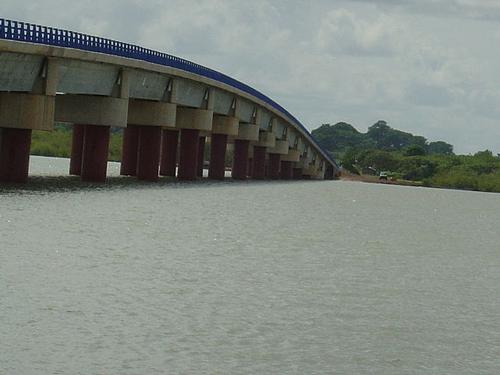 Guinea-Bissau has a tropical humid savannah climate. The climate is hot and humid. The temperature remains almost constant throughout the year and lies between 23 and 29 ºC. December and January are the coolest months. April and May are the hottest months. The rainy season is from June to November and the dry season is from December to May, when the Harmattan wind blows.

The estuaries and the coastal area are marshy. Mangroves are found here. Between the inland plateaus and the coastal area, there is tropical rainforest. The inland plateaus have savannah vegetation. Because Guinea-Bissau is very flat, there are few plant species. What one does find are rivers and braided trees. Acacia, bamboo, banana, kapok tree, mango and oil palm are also found. The largest area in Guinea-Bissau is used for rice plantations.

The country's fauna is interesting, as Guinea-Bissau is home to many bird species, including parrots, pelicans, herons, flamingos and marabous. In the wild, there are species such as antelopes, manatees, buffaloes, elephants, deer, crocodiles, hyenas, leopards and various monkey species such as chimpanzees.