The Dominican Republic (officially: República Dominicana) is a republic in the Caribbean, located on the eastern part of the island of Hispaniola (Spanish for 'Little Spain'). The west side of Hispaniola is occupied by Haiti.

With approximately 48,500 km2, the Dominican Republic covers about two-thirds of the island of Hispaniola. Hispaniola is a total of 77,000 km2 , making it the second largest island in the Caribbean after Cuba. 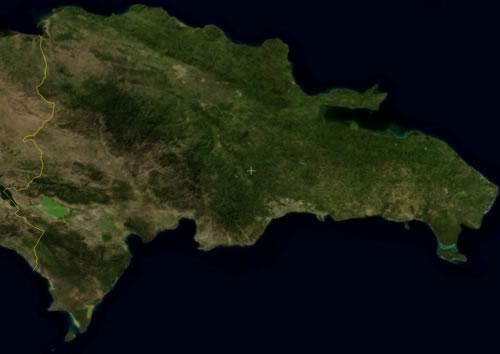 To the north the island borders the Atlantic Ocean, to the south the Caribbean Sea. Between the eastern tip of the Dominican Republic and Puerto Rico lies the Mona Passage.

The border between the Dominican Republic and Haiti is 360 km long, the total length of the coast is about 1500 km. The longest distance from north to south is 240 km, from east to west 320 km.

The landscape of the Dominican Republic is very diverse, ranging from tropical rainforest through alpine mountain ranges to desert-like arid regions. Imposing mountain ranges run across the island and divide it into climatically distinct areas.

The most important mountain massif is the Cordillera Central, which splits the country in two, a northern and a southern part. The highest mountains are also found here, with the Pico Duarte as its highest peak at 3175 metres. The Pico Duarte is also the highest mountain in the Caribbean region. Another high mountain is the Loma la Rucilla (3045 m). To the east, the Cordillera Central passes into the coastal plain of Santo Domingo. The mountain range connects to the west with the Massif du Nord in Haiti.

To the north of the Cordillera Central lies the Cordillera Septentrional, a low mountain range (highest peak: Loma Quita Espiela, 943 m), which forms a natural barrier between the northern coastal strip and the hinterland.

The Cordillera Oriental is in the east and is the smallest of the three mountain ridges. It is more hilly and separates the Bahía de Samaná from the coastal plain. It forms an important water reservoir and is the source area for the largest rivers.

To the southwest are two smaller mountain ranges: the Sierra de Bahoruco and the Sierra Neiba. Not far from here is the desert-like landscape around Lago Enriquillo. 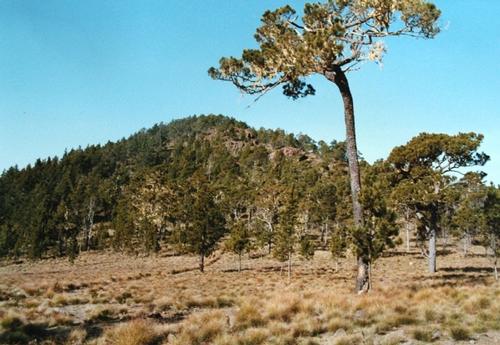 The summit of Pico Duarte, the highest point in the Dominican RepublicPhoto: Adrian Michael, CC BY-SA 3.0 no changes made

Between the Cordillera Central and the Cordillera Septentrional lies the very fertile Cibao Valley or Valle del Cibao, of which the south-eastern part, the Vega Real, is the most important agricultural area in the country.

The Valle de San Juan lies at the southern end of the Cordillera Central and is much drier than the Valle del Cibao.

The provinces of Independencia and Barahona are bisected east-west by a desert-like valley of salt lakes, including the famous Lake Enriquillo, 42 km long, 12 km wide and 40 metres deep, making it the largest inland sea in the Caribbean. The lake was originally an inlet separating the present Baoruco peninsula from the mainland. It was created by siltation of scourge sand brought by the rivers from Sierra de Neiba and Sierra de Ocoa. The lake is therefore about 40 metres below sea level and is the lowest point in the Caribbean. There are a few islands in the lake, including Isla Cabritos.

This makes it remarkable that the Dominican Republic has both the highest (Pico Duarte) and the lowest point in the Caribbean.

The shortest river in the world has its source in the Cueva de la Pequera ('fisherman's cave'). After only a few metres, it flows into the sea. The cave is located in the Los Haitises National Park.

The Dominican Republic has the most and most beautiful beaches in the Caribbean, both along the Atlantic and the Caribbean Sea. There are kilometres of beaches, but also small beaches surrounded by greenery and rocks. Some of the splendidly located beaches are hardly ever visited by tourists. According to the Dominicans themselves, the republic has 43,330 beaches.

The islands off the coast also often have beautiful beaches. Some of these islands are La Matica, Isla Beata, Isla Catalina, Isla Saona, Cayo Levantado, an island in the Bay of Samaná in the northeast, and the cayos Siete Hermanos, a group of seven smaller islands.

Isla Catalina, a coral island off the coast of La Romana, has been declared a protected area and is part of the Parque Nacional del Este. A large part of the island is surrounded by a reef. Isla Saona (117 km2 and approx. 1000 inhabitants) also belongs to the above-mentioned national park.

The south-east consists largely of a large flat limestone plateau, bounded in the north by the Cordillera Oriental and in the north-east by the swampy area of Los Haitises. Due to the limestone subsoil, many underground rivers and caves have formed here. The most beautiful cave systems are located near La Romana and in the Parque Nacional del Este.

The southwest of the Dominican Republic is an area of great scenic contrasts and is dominated by the Sierra del Neiba, which reaches altitudes of 2000 metres. The Pedernales peninsula has scrubby vegetation, while a little further on are beaches covered in deep green vegetation, the so-called "Emerald Coast".

The sand dunes and salt pans of Las Salinas form a special backdrop for the water sports frequently practised there.

Unique is the Laguna Grí-Grí on the north coast, a lagoon surrounded by mangroves. A karst cave, a coral reef and a bat cave full of stalagmites and stalactites are special.

The Dominican Republic has many waterfalls: the Aguas Blancas waterfall, located approximately 10 km outside of Constanza, plunges 83 metres into the depth. The waterfall "Cascade del Limón" on the Samaná peninsula was declared a national monument in 1998.

The 'mogotes' on the Samaná peninsula are special. Mogotes are free-standing clumps of stone up to 200 metres high. They arose from a large limestone plateau that was worn down over millions of years, so that only the mogotes remained. This is how the mogotes got their strange shape, fairly steep slopes, usually flatter at the top and densely vegetated.