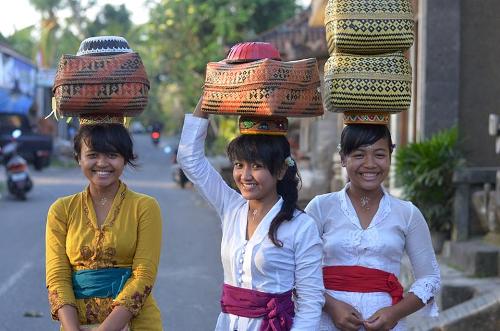 The largest population group in Bali is formed by the Balinese (approx. 3 million), who descend from the second wave of migrants.

Bali was inhabited relatively early and a Balinese Hindu-Buddhist culture developed with its own high quality character. Bali has the largest Hindu community in the world outside of India. Ninety percent of the Balinese population adheres to Balinese Hinduism.

Until the beginning of the 20th century, the Balinese lived completely isolated from the rest of the world. 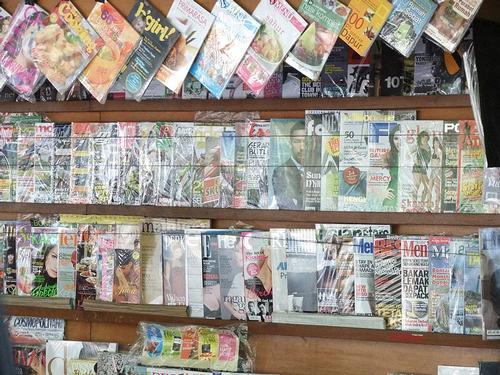 The Malay-Polynesian or Austronesian language family consists of about 250 languages, within which 40 main groups can be distinguished, such as Acehs, Malay, Buginese, Javanese and Sundanese.

In present-day Bahasa Indonesia, the languages of the former rulers are still clearly identifiable. From Portuguese come the words mentega (butter), nona (miss) and sepatu (shoe). From Dutch are among others: mebel (furniture), bangrut (bankruptcy), karcis (cards), handuk (towel), pinter (clever) and donkrak (stupid power). Words like bodigar (bodyguard) and suplai (supply) are derived from English.

Bahasa Indonesia is a non-tonal language that is fairly easy to learn. The language is written in the Roman alphabet, words are pronounced as they are spelled, and the morphology is simple. Verbs and nouns are not conjugated.

The hardest part is using prefixes and suffixes to change base words into verbs and nouns. Accents are not indicated any more than in Dutch. The e at the end of the first syllable is always mute or toneless.

Like other languages, Indonesian has a predilection for abbreviations, which are often incomprehensible to outsiders (e.g. Pukesmas = Pusat Keséhatan Masyarakat).

From Maly to Bahasa Indonesia 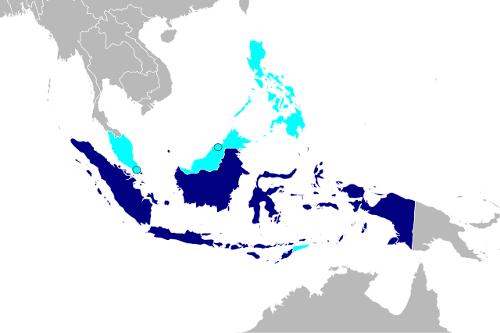 The peoples of Sumatra and the Malay peninsula originally spoke different dialects of Malay. From these dialects a court language and a simple variant developed, which spread from Sumatra all over the archipelago and served as a colloquial language mainly for the trade contacts between the various peoples. The need for a colloquial language was great because hundreds of languages were spoken in the archipelago. The fact that Malay had a simple structure was convenient. Malay, a trading language or "lingua franca" at the time, could easily be spread through the major trading centers on either side of the Straits of Melaka. Foreign groups such as Arabs, Chinese and Europeans also used this language.

Many Dutch migrants used an even simpler variant of Malay in dealing with the indigenous population: Pasar Malay. Journalists and writers used Low Malay, a mixture of the simple Pasar Malay and Classical Malay, incomprehensible to Javanese, the book language of the royal courts along the Sumatran coast. Writers, who wrote extensively in Low Malay, popularized Low Malay as a written language.

The spelling of Malay was very diverse until the 20th century, and there was no need to establish a standard. Europeans, on the other hand, had an interest in standardizing Malay, but were unable to answer the question of where the "best" Malay was spoken. The Protestant mission made a first attempt to provide a Bible translation in Classical Malay from the Riau Archipelago. Dutch and native officials used this Malay to communicate with each other, and it was therefore definitively elevated to Standard Malay. Important in this was the teacher C.H. van Ophuijsen, who wrote a "Malay grammar" and a "Malay textbook" at the beginning of the 20th century. The result was that a written language was chosen that was close to Classical Malay and that was very different from most other Malay dialects and also from the popularized Low Malay.

Van Ophuijsen's Standard Malay gradually replaced Javanese Low Malay in the written language. In daily interactions, Malay-speaking Indonesians continued to use their own dialect, widening the gap between writing and spoken language.

On October 28, 1928, the participants in the Indonesian Youth Congress took the "Oath of the Young People", in which they promised, among other things, to fight for one language, Bahasa Indonesia. That Indonesian language was Van Ophuijsen's Standard Malay. Until the Second World War, however, Dutch remained an important competitor. For example, civil servants used Malay in contact with the population, but Dutch was taught in secondary schools. In 1942, the Japanese occupier forbade the use of Dutch, which marked the definitive breakthrough of Indonesian as the national language. It became the language of education, civil service, politics, the press and literature.

To obtain uniform grammar and uniform spelling, Indonesia worked together with Malaysia in a language union. In 1972 the two countries agreed on a new spelling, changing for example Jakarta to Jakarta and Aceh to Aceh.

At the beginning of the eighties of the last century, Dutch was spoken by no more than one million Indonesians. Eighty percent of the population was born after 1950, so that Dutch is rapidly disappearing from Indonesia. The decline of Dutch is offset by the rise of English, a language that is also taught in secondary education.

The name Indonesia (Indonesia), first used by the British ethnologist G.R. Logan in 1850, is derived from the Latin. India and Greek nèsos (= island) means Indian archipelago.

Some words and expressions 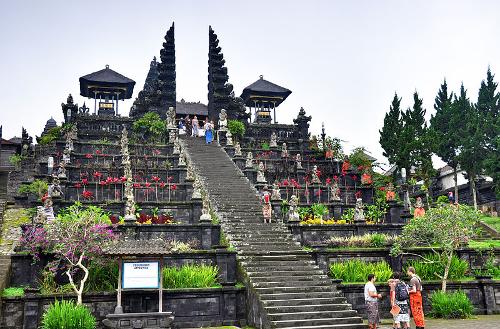 Hinduism in Bali (Agama Hindu Dharma or Agama Hindu Bali) is the second major religion in Indonesia. In Bali, this religion is practiced by more than 90% of the population.

This religion cannot be compared with Hinduism in India or with the old Hindu Javanese religion. Yet these two elements, along with Buddhism, form the basis of complex Hinduism in Bali.

The Agama Hindu Dharma, in which the belief in one supreme being is central, is based on five principles, the "panca srada":

1. the belief in "Sanghyang Widhi Wasa", the one and one God.

3. belief in "Kharma Pala", the law of cause and effect.

4. Belief in "Punarbhawa", or incarnation.

5. the belief in "Moksha", the union with the Eternal Spirit.

Traveling across Bali, the many statues and temples give the impression that many gods are worshiped and worshiped. In reality they are different manifestations of the "trimurti", the trinity: Brahma the creator, Wisnu the keeper and Siwa the destroyer. This trinity is united in one god: Sang Hyang Tunggal, the "Most High," who manifests in different ways. Hence, the many gods and goddesses are only certain aspects of the "Most High" or the "Only One."

The center of the faith is the "pura desa", in which Brahmin priests perform the principal ceremonies. In addition to these large temples, there are also many thousands of other temples, including mortuary temples, family temples and house temples on the residential areas.

In Bali there is always a temple party or religious ceremony somewhere. The highlight of the year is the great temple festival, the "odalan," which is celebrated in every village to commemorate the foundation of the temple. When all festivals have to take place is calculated on the basis of the Balinese calendar, which is based on the "wuku" or lunar year.

The most "spectacular" ceremony to see is the cremation or "ngaben". This event makes a happy impression, and that is because the person who is cremated often passed away months or years ago. By the combustion the soul of the deceased is liberated and heaven can be reached.

The size of the towers depends on the closet and the wealth of the deceased. The tower represents the cosmos. The base is shaped like a turtle, wrapped by two snakes. Above it a platform has been made on which the body is placed, and is thus located between heaven and earth. Different rules apply to brahmins. They are cremated as soon as possible after death and are laid out in a bier shaped like a "padmasana" or lotus seat.

The differences with India are striking. In India these are simple ceremonies, but in Bali they are surrounded with a lot of ceremonial. 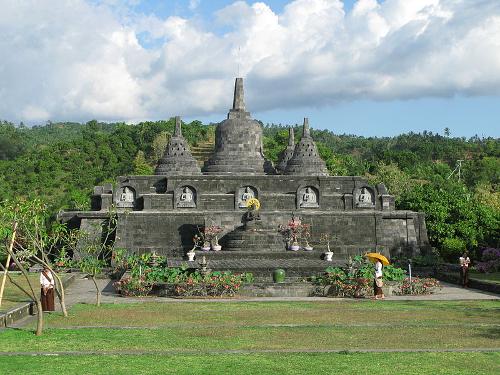 Pure Buddhism has few adherents in Indonesia. In Banjar, Bali, is the Brahmawihara Arama, a Buddhist monastery and meditation center inhabited by some Balinese Buddhist monks.

A revival of Buddhism experienced a revival in the 1930s. When the Europeans disappeared after independence, Indonesian Buddhism became an almost exclusively Chinese affair.

The Borobudur in Java is a gigantic Buddhist structure that cannot be compared to any other human creation. The construction required 56,600 m3 of stones, making Borobudur the largest "stupa" in the world and the largest historical monument in the southern hemisphere.

Borobudur's architecture also features Persian, Babylonian and Greek influences, and therefore has little in common with other Buddhist temples in Southeast Asia.

Its construction came about thanks to the Vajrayana sect of the Tantric school of Buddhism. The Saliendra princes had it built by farmers between 778 and 850. With the Saliendras being overthrown in 856, the structure soon fell into disrepair. Partly as a result of the many volcanic eruptions, the monument has been under a layer of earth for hundreds of years. Borobudur was discovered by an English colonel in 1814 and the building was cleared again in 1855. Only in 1973 was the restoration started. 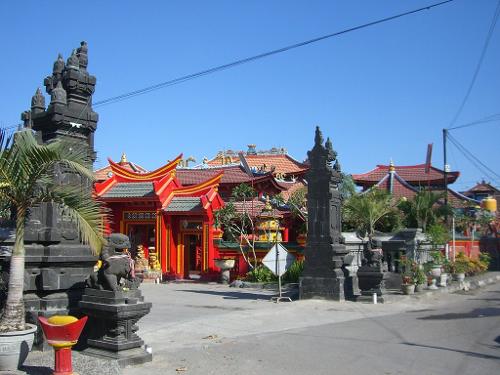 The religion of the many Chinese immigrants is a mixture of Buddhism, Confucianism and Taoism, and is called the 'Three Religions' or 'Sam Kauw Hwee', a name changed to Tri Dharma in 1963 as part of the Indonesianization campaign. term taken from Sanskrit. Tri Dharma can be considered a Chinese form of syncretism. Buddhism and Confucianism in China were mainly a matter for the social and religious upper class, while Taoism dominated the perception of the common people. Because the Chinese migrants were mainly from simple peasant backgrounds, they brought this folk beliefs to the Indonesian archipelago. In addition to domestic temples, the gods and ancestors are also worshiped in larger Chinese temples or "klenteng".

Despite the small number of official adherents, the significance of traditional religions cannot be neglected. Many Indonesians continue to value elements of the old folk beliefs, even after they have joined one of the "great" religions. There are major differences between the original religions, they have all undergone their own historical development.

A common element is animism, the belief that nature and man-made objects can be animated. Especially old trees, mountains, caves and springs are popular places of residence of the spirits according to popular belief. Sometimes it concerns real nature spirits, but a deity or the spirits of the deceased can also reside there.

Belief in an inspired nature goes hand in hand with ancestor worship, another common element in most of the original Indonesian religions. There is a general belief that the spirits of deceased people influence earthly existence. The soul of a deceased must therefore be surrounded with great care. During rituals, shamans ensure contact between the common people and the world of the spirits. These and other rituals are the cement of a traditional society