Vanuatu, until 1980 the New Hebrides (officially in Bislama: Ripablik blong Vanuatu; in English: Republic of Vanuatu), is a republic in the Pacific Ocean and is formed by an archipelago of approximately eighty islands. The islands can be divided into three groups: the Torres and Banks islands in the north, Espíritu Santo, Maewo and Efate in the centre and the Tafea islands Tanna, Aniwa, Futuna, Erromango and Aneityumin in the south. Vanuatu is part of Melanesia.

Melanesia is an island world in the Pacific Ocean and part of Oceania, with a total land area of approximately 967,000 km2 and 5 million inhabitants. The area includes New Caledonia and the states of Papua New Guinea, Solomon Islands, Vanuatu and Fiji. The name Melanesia (from Greek melas = black and nesos = island) refers to the skin colour of the inhabitants, who are racially classified as negroids. 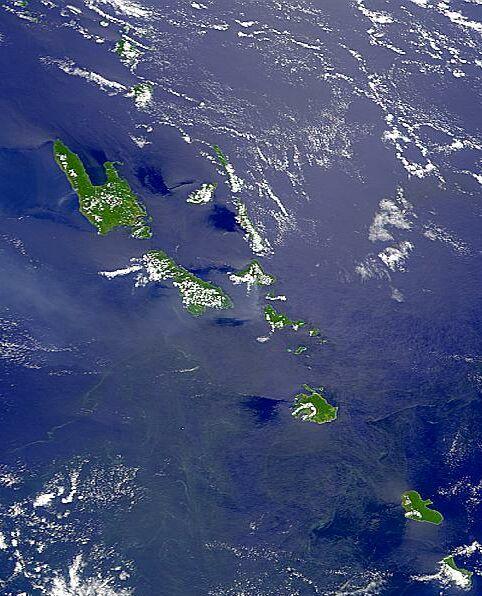 Most of the volcanic rock islands are mountainous or at least covered in steep hills and surrounded by coral reefs. Approximately 35% of the total land area is above 300 metres and 55% of the slopes have an incline of more than 20%. The highest peak in Vanuatu is Mount Tabwemasana on the island of Espíritu Santo at approx. 1811 metres. The islands Ambae, Ambrym and Tanna (including Mount Yasur) have peaks higher than one thousand metres. Some areas are so deeply cut with ravines that they are practically impenetrable. The steep hills are generally densely forested, while the narrow coastal area is dominated by coconut plantations and other agricultural activities. 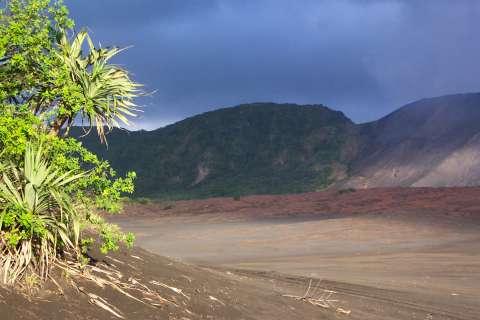 Mount Yasur on the island of Tanna, VanuatuPhoto: Bruno.menetrier in the public domain

Vanuatu lies right on top of the "Pacific Ring of Fire". In fact, the islands lie exactly on the edge of the Pacific tectonic plate, which slides over the Indo-Australian plate. Therefore, earthquakes and volcanic eruptions occur frequently. Some areas on Vanuatu are lifted two centimetres a year, while other areas sink. Seismographs record numerous quakes every day, most of which, however, are hardly felt. An earthquake in 1994 with more than seven on the Richter scale caused a lot of damage. Earlier earthquakes in 1875 and 1948 caused tsunamis (tidal wave resulting from a wholly or partially submarine earthquake or landslide), which destroyed entire villages. Vanuatu has nine active volcanoes (two of which are underwater) on the islands of Tanna, Ambrym, Gaua and Lopevi. There are also many active geysers and hot springs. On 10 January 2001, Vanuatu was hit by an earthquake measuring 6.9 on the Richter scale.