Lisbon (Lisboa in Portuguese) is the capital of Portugal. The agglomeration has about 2,900,000 inhabitants. It is the westernmost capital of continental Europe. Lisbon The Portuguese capital on the Tagus River offers a good mix of history, atmosphere and culture. You can eat out tasty and affordable and the climate is very pleasant until late in the year. 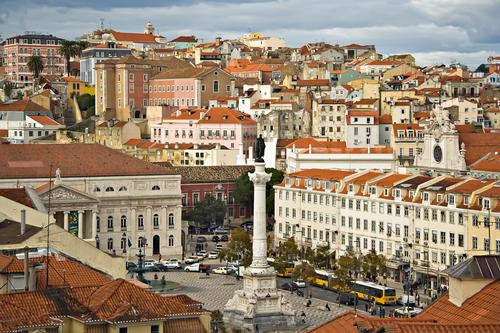 The climate of the Portuguese capital is temperate with warm and dry summers. The average annual temperature is 16.8 ° C and the annual amount of precipitation is 753 mm. This rain mainly falls in late autumn and winter. At other times it is usually quite sunny, as the sun shines more than 2,700 hours a year.

In winter, many Atlantic depressions pass through Portugal. In December, January and February there is 110 mm of rain per month. It is also regularly sunny in winter. Due to its location on the Atlantic Ocean it is mild with temperatures around 14 degrees. It almost never comes to night frost.

In March and April it will be slightly milder, the average temperature is around 18 ° C, so it will be drier and sunnier. Low-pressure areas then follow a more northerly course and the influence of the high-pressure area above the Azores increases. Which provides more sun and less rain. The temperatures are usually between 20 and 25 degrees. 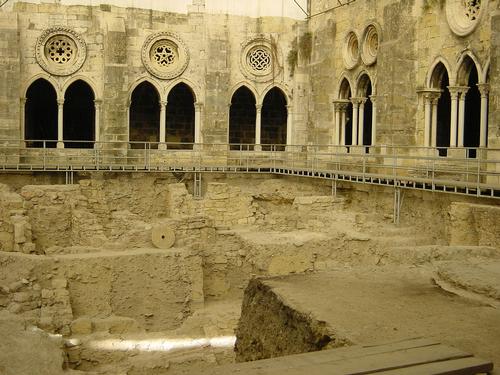 Legend has it that Lisbon was founded by the Greek hero Odysseus on his long journey home, the Odyssey. Around 1200 BC. a Phoenician trading post was created. Around 200 BC. the city was conquered by the Romans. When the Roman Empire fell, the city fell into the hands of peoples from the north and fell into disrepair.

Among the Muslims, who invaded around 714, the city flourished again and became an important trading center again. The name of the city was al-Ushbuna or al-Ishbunah.Alfonso II of Asturias invaded the city during a raid in 798, but was unable to keep it. The Umayyads of Andalusia conquered the city in 809 from a rebellious Muslim, Tumlus. In 955 it was Ordoño III of León who sacked Lisbon and imposed peace on Caliph Abd-ar-Rahman III. From 1022, Lisbon formed the independent Taifa of Lisbon. Raymond van Bourgondia, heir to Galicia, entered Santarém and Lisbon in 1093. Yusuf ibn Tashfin emir of the Almoravids from Morocco retook the city in 1094. In 1111 it was again the Almoravids, now under Sir ibn Abi Bakr, who took Lisbon and Santarém. King Alfonso I of Portugal, who had proclaimed himself the first king of the initially smaller Portugal in 1139, conquered Lisbon on October 21, 1147, after a failed attack in 1140, with the help of, among others, the crusader Gilbert or Hastings. The siege lasted 17 weeks and the Muslims eventually surrendered because of hunger. The Christians caused a true massacre among the residents (154,000) of al-Ushbuna, making little distinction between Christians and Muslims. For example, the 'bishop' of the city, along with a delegation of other Christian and Muslim leaders, was also murdered by the Crusaders. The remaining Muslims were given a free retreat and left al-Ma'din (Almada) on the south bank of the Tagus at the same time as al-Ushbuna. Alfonso I then had an existing fortress on a hill converted into a royal palace. The Castelo de São Jorge fulfilled this role until the beginning of the 16th century. Sé Cathedral, where Hastings was the first bishop of Lisbon, was also erected. The church of Santo António Sé, which is dedicated to Anthony of Padua, the city's 13th century patron saint. Lisbon became the capital of Portugal in 1255. The city developed strongly, both economically and culturally; For example, in 1290, the University of Lisbon was founded and later moved to Coimbra and is still standing there today. 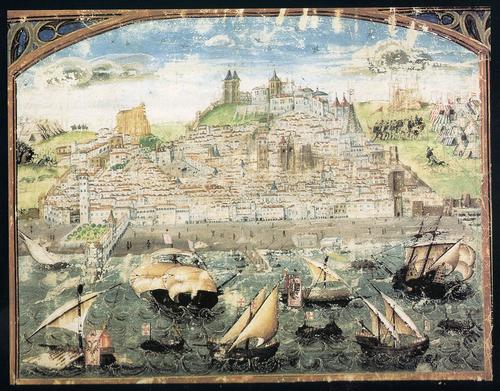 With Vasco da Gama's discovery of the sea route to India, around 1500, the Portuguese Golden Age began. King Manuel I had the Mosteiro dos Jerónimos built after Da Gama's return. On November 1, 1755, the city was hit by a massive earthquake (better known as the Lisbon earthquake). The many deaths, 15,000 according to some sources, were caused not only by collapses, but also by fires and high waves. Reconstruction began under the pragmatic prime minister, the later Marques of Pombal. His influence is reflected in the austere street plan of the Baixa district. The 20th century dictator António de Oliveira Salazar also modernized the city. In 1998, Lisbon hosted the Expo '98 World Fair.

See also the history of Portugal on Landenweb. 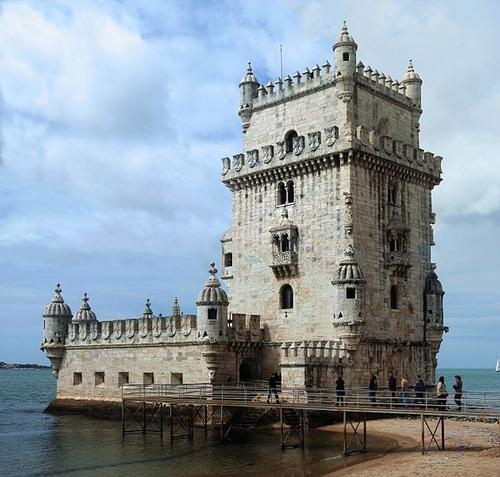 Santa Maria de Belém is home to the World Heritage Sites of the Hihi Ronymite Monastery Mosteiro dos Jerónimos and the Torre de Belém. The explorer Vasco de Gama, among others, is buried in the monastery.

Baixa, the "lower town", is the center of Lisbon. Here is the Rossio, the main square of the city for centuries. Praça dos Restauradores is almost attached to Rossio's main square. The very large square Praça do Comércio, located on the Tagus, was the royal residence until Portugal became a republic in 1910.

The Bairro Alto district, west of the Baixa, has many restaurants and nightlife options. The neighborhood, about thirty meters higher, can be reached from the center with the Elevador de Santa Justa. This lift was designed by a student of Gustave Eiffel in the neo-Gothic style from around 1900.

To the east of the center is Alfama, an old working-class neighborhood. With its many steep streets, stairs and alleys, it is an important attraction. Several fado houses can be found in Alfama. These are small restaurants where traditional fado is performed. In this fado neighborhoods such as Alfama, Bairro Alto and Mouraria, but also Lisbon and Portugal are frequently sung about. Tram line 28 meanders through the district, on which very old tram equipment runs. This tram line is widely used by tourists, but is still important for the opening up of the neighborhood. The city's most famous and oldest church, Lisbon Cathedral, is also here. 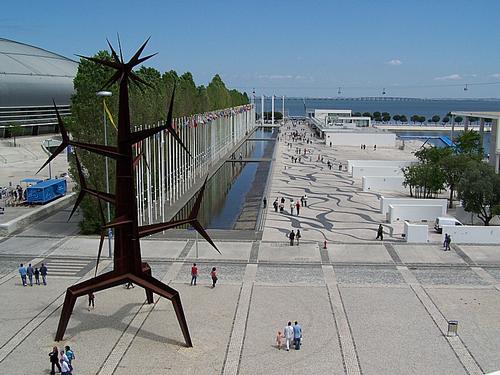 A few kilometers east of the center is the "new center" on the exhibition grounds: the Parque das Nações known from Expo '98. This includes the Oceanário de Lisboa an aquarium, the Vasco da Gama shopping center, the Vasco da Gama Tower, a funicular and the Gare do Oriente train station.

The city also has two bridges worth seeing. The Ponte 25 de Abril, named after the 1974 Carnation Revolution, connects Lisbon with the Outra Banda, the south bank of the Tagus. The design is based on that of the Golden Gate Bridge in San Francisco. In addition, there is the new bridge over the Tagus: the 17 kilometer long Vasco da Gama bridge. 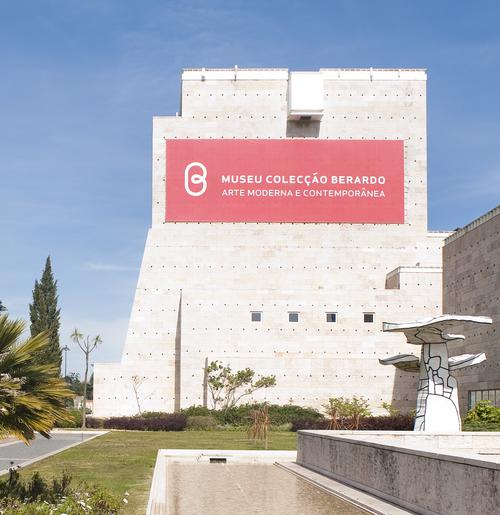 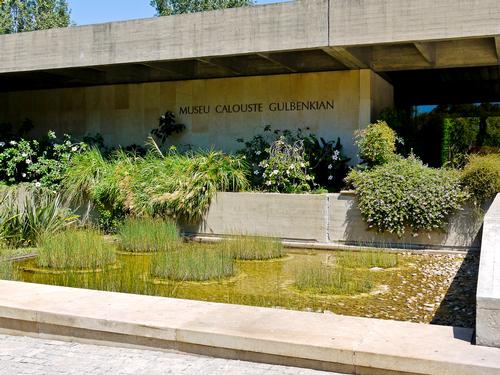 Northeast of Eduardo VII Park is the Gulbenkian Museum. This museum houses a wonderful collection of Egyptian, Greek, Roman, Islamic, Asian and European art. It is one of the finest private art collections in the world, amassed over 40 years by oil magnate Calouste Gulbenkian. He donated his amazing art treasures to the land where he lived when he died in 1955 at the age of 86. Highlights include a golden mask of an Egyptian mummy, an exquisite 2,700-year-old alabaster bowl, a series of bronze cats, and other precious treasures in the Egyptian department. There is also the portrait of an old man by Rembrandt and a beautiful collection of Greek coins, rare pieces of Chinese porcelain, Japanese prints and 16th and 17th century Persian carpets. In the large European art section you can admire works by Rembrandt, Peter Paul Rubens, Claude Monet, van Dyck, Rogier Van der Weyden and Pierre-Ausguste Renoir. Especially worth mentioning is René Lalique's large collection of jewelery. 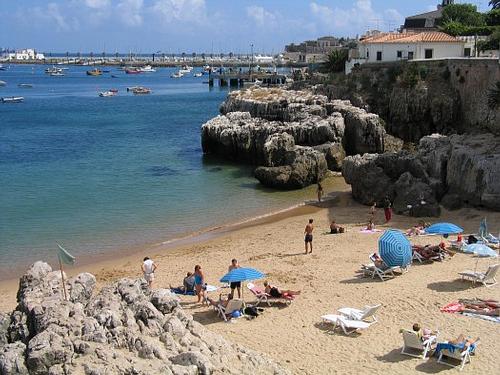 Cascais is a less luxurious seaside resort, but very cozy, it was originally a fishing village, now Cascais and Estoril merge. Estoril is a residential area half an hour from Lisbon, the nightlife is located around the casino. 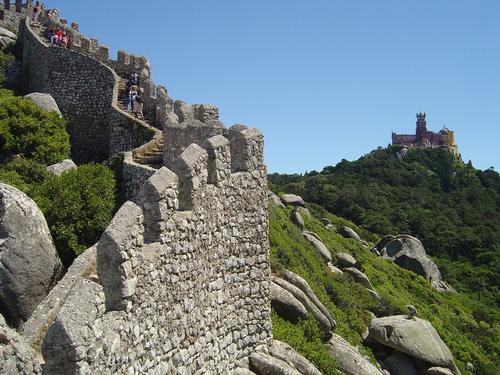 The nightlife in Lisbon mainly takes place in the Bairro Alto, the upper city, and in the Alcantara district on the bridge over the Tagus. Typical for Lisbon are the fador restaurants, where you can enjoy a delicious meal while you enjoy this melancholic traditional music. Fado has a special place in the life of every Portuguese, it translates the mood of his life, sadness, melancholy, joy, melancholy, saudade, not to mention the festive mood. Amalia Rodrigues is widely regarded as one of the most important and influential fado singers ever.