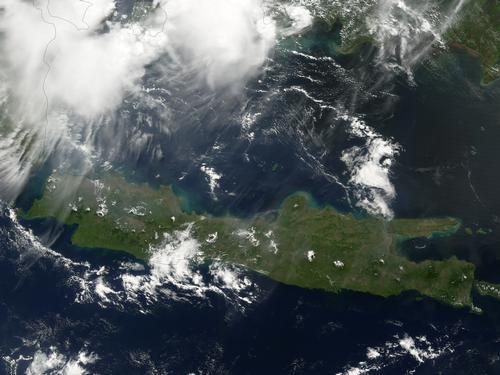 The landscape is very diverse. There is a volcanic mountain range of which only a handful of the 30 still working volcanoes can be visited. Characteristic of Java are the sawas or rice fields. Most rivers on Java flow to the north and empty into the Java Sea. The rivers on Java are relatively long. The Solo River rises in Central Java, near the south coast of the island, and winds for a distance of about 600 km before emptying into the Java Sea at Surabaya. 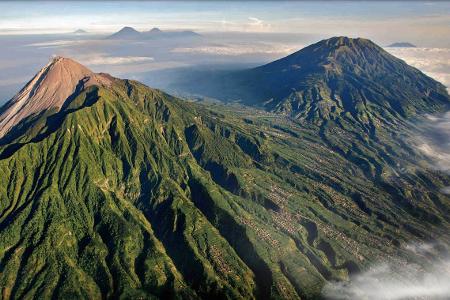 Series of volcanoes in Java, including the MerapiPhoto: Public domain

The climate in Java is (sub)tropical, averaging between 22 and 29 degrees Celsius. In general one can say that from October to May in Java is the wet monsoon season ('musim hujan'). In the afternoon it often rains for a few hours very locally, which refreshes everything and the temperature drops slightly. Most rain falls in January and February. The dry season ('musim kemarau'), is from May to October.

On Java, only about 10% of the original vegetation remains. Almost all lowland rain forests have disappeared. Most of the present forests consist of teak forests, which were created because of the timber trade. In the Gunung Gede Pangrango National Park, above the tree line, we find the last remnants of Javanese mountain flora. Here grows the Javanese edelweiss, gentians, blackberries, strawberries and St. John's wort, among others. In the cooler mountain areas many other species of ferns, rhododendrons, turpentine trees, beech, oak and acacia also grow. Orchids live both in the jungle and high in the mountains.

Animal life is still quite varied in Java. Characteristic of Java is the water buffalo (Karbouw) which is used in agriculture. However, a number of animal species are struggling, the one-horned Javan rhinoceros is only found in the Ujung Kulon reserve in West Java and the Javan tiger is almost certainly extinct. However, there are pygmy deer (Kantjil), leopards, monkeys and panthers in the wild.