French Guiana is the oldest colony of France and is located on the north-east coast of South America. The country borders Suriname to the west, Brazil to the south and east and the Atlantic Ocean to the north.

The area in the south-west, between the Litani and Maroni rivers, is disputed with Suriname. The capital of French Guiana is Cayenne. French Guiana (French: Guyane) is a French overseas department on the north coast of South America. It is the largest territory of the European Union outside of Europe.

The mountainous interior is covered with dense jungle. More than 20 rivers rise here and flow into the sea. The most important are the Oyapock in the east and the Maroni in the west. They form a natural border with the respective neighbouring countries of Brazil and Suriname. In the south, the Toemoek-Hoemak mountain range marks the border with Brazil. 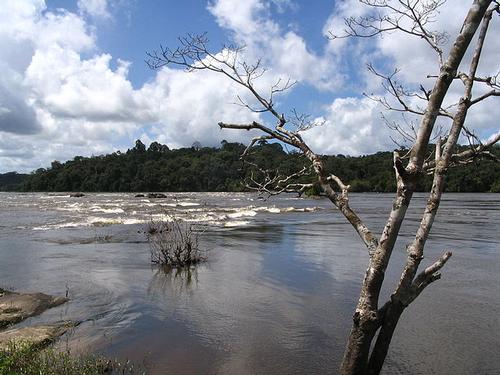 The country is divided into three zones: the terres basses (broad coastal plains with mangroves and sandy beaches), a central plateau with savannah vegetation that passes into the terres hautes, the jungle-covered mountain areas.

The climate of French Guiana is distinctly tropical: hot and with high to very high humidity. The dry season (July to November) is the best time to travel. Most rain falls in April and May. The relative humidity is on average 80%. The winds blow predominantly from the east and are generally weak with speeds of between one and two metres per second. The average daily maximum temperature is highest in October and lowest in January. The average minimum temperature throughout the year is about 23 degrees.

Mangrove plants and many varieties of hibiscus grow on the coast. Almost four-fifths of the country is covered by tropical rainforest. Common crops in French Guiana are pineapple, banana, cocoa, coffee, cassava, rice and sugar cane.

The Guyana jungle is threatened by road building, hunting and increasing logging. The French Guiana Rainforest Network (FGRN) fights for the preservation of the rainforest.