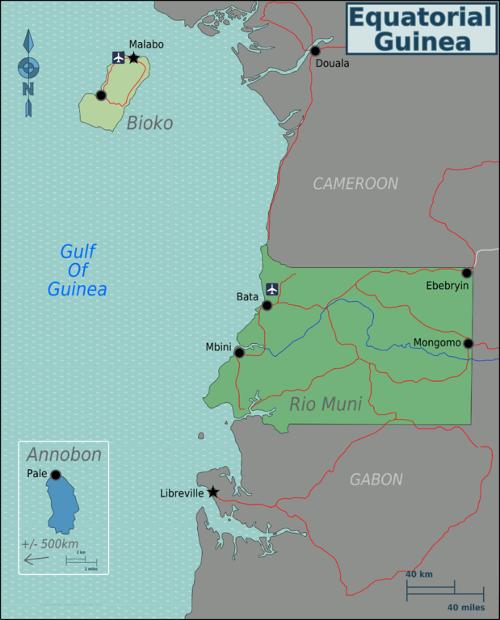 Map of Equatorial GuineaPhoto: Burmesedays CC 3.0 Unported no changes made 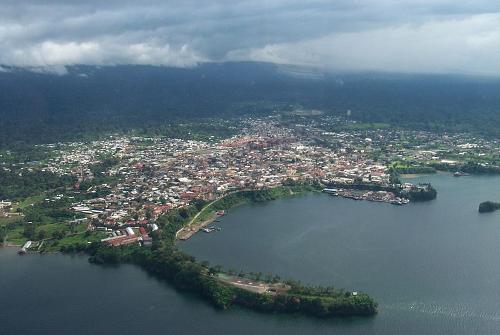 Equatorial Guinea is a country with many tropical forests and volcanoes. In many places, the country is so densely vegetated that paths spontaneously appear when walking there. Actually, the country consists of two provinces, with Bioko and the other smaller islands on the one hand, and Rio Muni (the mainland between Cameroon and Gabon) on the other.

On Bioko Island there are three elaborate volcanoes that cover most of the country: the Pico de Santa Isabel (3008 metres), the Pico de Moka and in the south of the island the Gran Caldera (2260 metres). Pico de Santa Isabel is also the highest point in Equatorial Guinea. The island is surrounded by black sand beaches. Geographically, Rio Muni is less interesting because of its dense vegetation and flatness, especially along the coast.

Equatorial Guinea has a tropical climate. It is hot and humid with a lot of rain. In Bioko, most rain falls in the months of July to the first half of January. Especially the months from July to October are very wet. On the mainland, most rain falls in April and May and in the months of October and December. On Bioko, the annual rainfall is 2000 millimetres and in Rio Muni even 4000 millimetres. Further inland, the rainfall decreases. The months of March, April and May are the hottest with temperatures of around 35 degrees Celsius. The other months also have temperatures between twenty and thirty degrees: the average annual temperature is 25 degrees.

At altitudes above 600 metres, the island of Bioko is covered with tropical rainforests. At higher altitudes, this forest slowly changes into a more open landscape of mountain savannahs. The vegetation of the highest zones consists of grasses and lichens. Inland, there are grass savannahs on the high plains. Rio Muni consists mainly of dense tropical rainforest. Furthermore, there are many cocoa and coffee plantations in Equatorial Guinea, especially on Bioko Island. Banana, ebony, coconut, mahogany, okoumé, rosewood and walnut are also found in Equatorial Guinea.