Glasgow is the largest city in Scotland and has a strong industrial past. It is one of Europe's first post-industrial cities and Glasgow has received the impressive title of British City of Architecture and Design. The city's architecture is certainly an attraction in itself, especially the impressive Victorian buildings and of course the unique masterpieces of one of Glasgow's most celebrated residents, architect and designer Charles Rennie Mackintosh.

The city center is located on the north banks of the meandering River Clyde. The city's two stations are located on Central Street and Queen Street. George Square is centrally located and the tourist office and Buchanan bus station are a short walk away. To the east, Merchant City is the main entertainment area and to enjoy the city's rich maritime heritage, take a cruise along the River Clyde and enjoy the view. 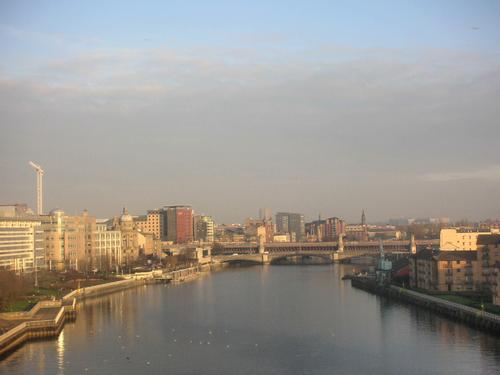 Glasgow on the ClydePhoto: Martin Le Roy CC 3.0 Unported no changes made

Glasgow is on the western side of the Scottish Central Belt, on the north bank of the River Clyde. Glasgow is located in the southwest of Scotland.

The weather in Glasgow is typically Scottish and often unpredictable. During the summer months of May, June, July, August and September, Glasgow has many beautiful and often sunny days. The climate in Glasgow is generally mild with the Atlantic Ocean winds warmed by the Gulf Stream. July is the hottest month and has an average temperature of over 20 ° C. The mornings sometimes start out gloomy, then it is humid and foggy, but in the afternoon the sun often shines, resulting in high temperatures.

Spring is a wonderful and popular time to visit Glasgow, with quite mild weather in March, April and May. Many trees are in bloom at this time of year and the parks and gardens are filled with spring colors.

Winters in Glasgow are humid with often less sunny days in November, December and January, but there are also still clear days and good weather this time of year. The weather in Glasgow is at its coldest during the winter months. Snow is rare, but there are often cold, clear, frosty days. Glasgow is a great place to visit, whatever the weather there is always plenty to see and do. 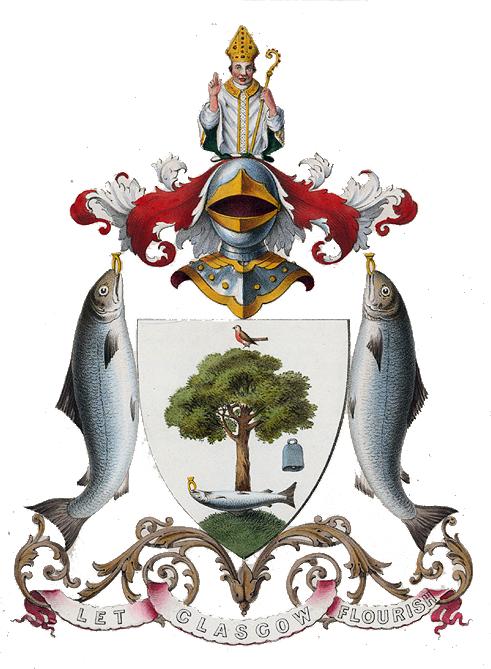 Glasgow was founded around a church founded by St. Mungo in the 6th century AD. By the 12th century, this episcopal settlement had become one of the wealthiest in Scotland. Around 1170 Glasgow became a burgh. In 1190, the city was also allowed to hold an annual fair on Glasgow Green. At this point in the city's history, Glasgow probably had no more than a few main streets. A sign of the city's growing importance was the founding of the University of Glasgow in 1451, at which time the university was very much connected to the Church. Lectures were held in the crypt of the cathedral or in a nearby cloister. In 1492, the city received its own archbishop.

Glasgow suffered numerous setbacks in the 17th century and was besieged several times. Nevertheless, the city started to flourish. The wealth was mainly based on the trade in tobacco, sugar and cotton. The newly built docks in Port Glasgow on the River Clyde facilitated goods imports and exports. Thanks to its location on the west coast of Scotland, the city benefited from the exploitation of the new colonies in the Americas and the West Indies. New prosperity brought urban expansion and construction projects. In 1772, a bridge was built over the River Clyde and work on the Royal Exchange was completed in 1775. 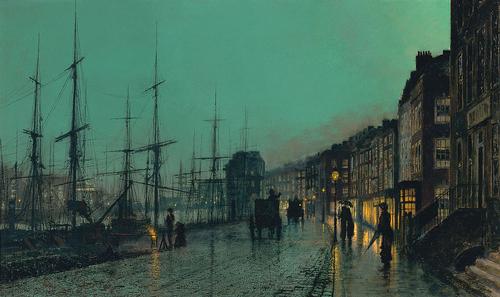 Heavy industry such as steel, coal and shipbuilding developed in the 19th century. The Victorians called Glasgow 'the second city of the British Empire'. In 1835 Glasgow produced half the tonnage of all British steamships. The arrival of steam trains meant that even more goods could be transported. A thriving textile industry was created by steam-powered factories. A rich class of entrepreneurs developed in the city, who spent money on art and beautiful homes. Ordinary residents of Glasgow noticed little of the progress. Cheap housing was built for the workers and the city got some of the worst slums in the entire country.

During World War I and later in World War II, Glasgow became a center for the production of ships and armaments. It also became a major target for the German bombing in World War II. Such attacks devastated much of Glasgow's slum. Post-war housing did not improve the situation. It was during this phase of the city's history that notorious neighborhoods like the Gorbals were built. 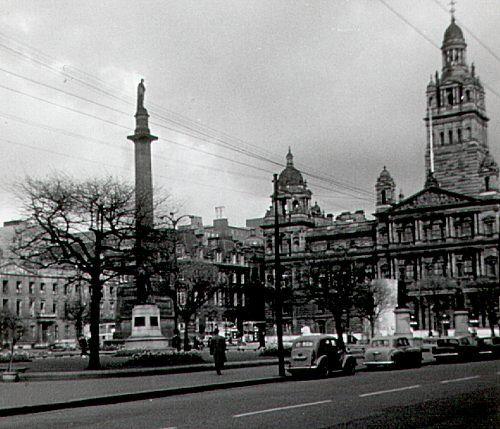 Things went downhill from the 1950s. Stiff competition from abroad and a lack of investment in the city led to high unemployment and poor conditions for those who lived here. In 1990 circumstances took a drastic turn. Glasgow became the European capital of culture and a period of major investments in the city followed. Glasgow was awarded the title of British City of Architecture and Design in 1999. 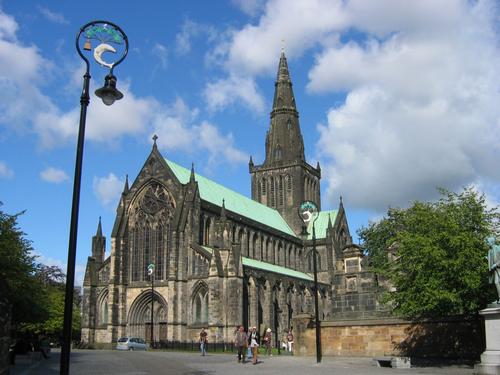 The oldest part of the city is concentrated around Glasgow Cathedral, to the east of the modern city center. This beautiful medieval monument was built in 1136 on holy ground and has remained the most impressive and important church in the city ever since. At the end of the 12th century, Glasgow Cathedral was destroyed by fire and rebuilt shortly after. Over the years, the building has undergone much renovation and restoration and has been remarkably well preserved. Now the church is administered by Historic Scotland. The building is in Gothic architecture and has a wooden roof dating from the 14th century, four stained glass effigies of the apostles.

Glasgow's main square is named after King George III. A number of important buildings are located on this square. The city council is located in a very beautiful Victorian building. The "General Post Office" is also located in a beautiful building. 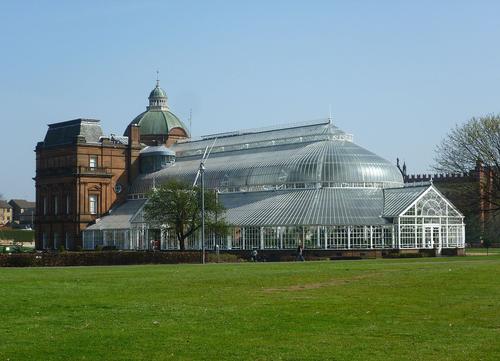 Contemporary Glasgow is heavily influenced by the work of some very talented Scottish architects of the past. Many of the most impressive buildings are very distinctive and built of red sandstone, examples of which are the People's Palace on Greendyke Street and the Charing Cross Mansions on Sauchiehall Street. 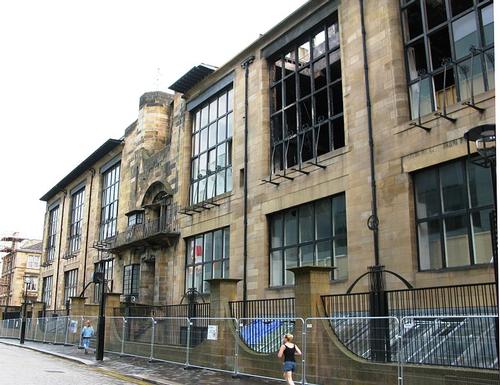 Glascow School of artsPhoto: P Joyce in the public domain

Perhaps the most famous architect is the world-famous Charles Rennie Mackintosh (1868-1928), who has become a great icon in the world of European design. Mackintosh was the man behind a number of important buildings, such as the Martyrs' School on Parson Street, Hill House in nearby Helensburgh, and an Art Lover's House at Bellahouston Park, as well as the lighthouse on Mitchell Lane. Mackintosh's masterpiece may be the Glasgow School of arts on Renfew Street. Another creation is the water tower, from here you have a beautiful view of the city.

There are many museums in the city, two of which are discussed below. 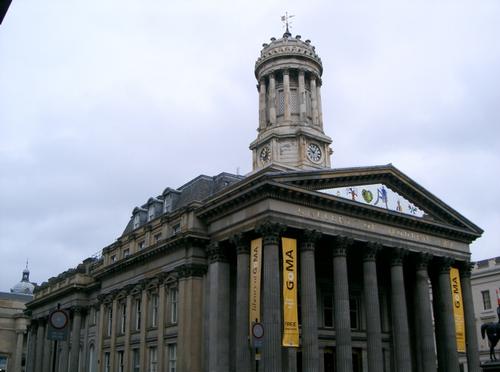 The Gallery of Modern Art can be found in the heart of Glasgow city center, near Buchanan Street station and Princes Square shopping center. The museum is housed in a historic neoclassical building dating from the late 18th century. The impressive collection is spread over four spacious galleries and contains paintings, sculptures and crafts. Works by Andy Warhol, David Hockney and Sebastiao Salgado to name some great artists can be seen here. 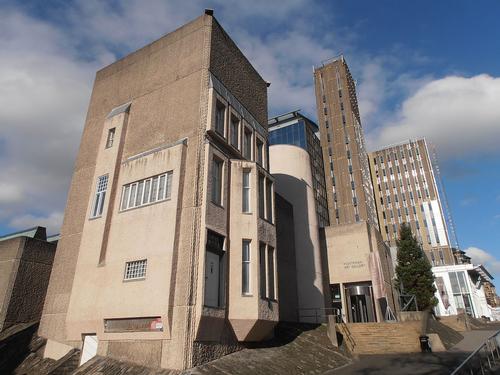 The Hunterian Art Gallery and Museum was founded in the early 19th century and is full of artifacts donated by William Hunter. The Hunterian was the first public museum in all of Scotland. This popular exhibition center has a nice permanent collection, such as an art collection with paintings by Rembrandt, Roman and Egyptian artifacts, dinosaur fossils, coins, medals and a replica of the rooms of Charles Rennie Mackintosh's house at Glasgow Southpark Avenue. The Hunterian Art Gallery is close to the Hillhead train station.

Hop on / hop off bus tours transport tourists around the city. These tours offer tourists an easy way of sightseeing, you can leave the bus to explore a bit of the city and hop on again later to continue your journey. The buses pass all the major sights of the city.

The Tall Ship is the affectionate name for the three-masted Glenlee, a famous ship originally built in Port Glasgow during the late 1800s. Recently moved from Yorkhill Quay to Pointhouse Place and is close to the Pumphouse Visitor Center. Visitors can see many interesting exhibits about the Glenlee and its restoration at the adjacent Riverside Museum. The renovated Captain's Cabin is an absolute highlight.