Martinique is an island in the Caribbean Sea, the southernmost island of the French Antilles and part of the Lesser Antilles. The island is 80 kilometres long and 25 kilometres wide and covers an area of 1360 square kilometres. Martinique is located approximately 700 kilometres south-east of the Dominican Republic. It lies south of Dominica and north of Saint Lucia, and belongs to the Windward Islands. Its total area is 1,102 km². 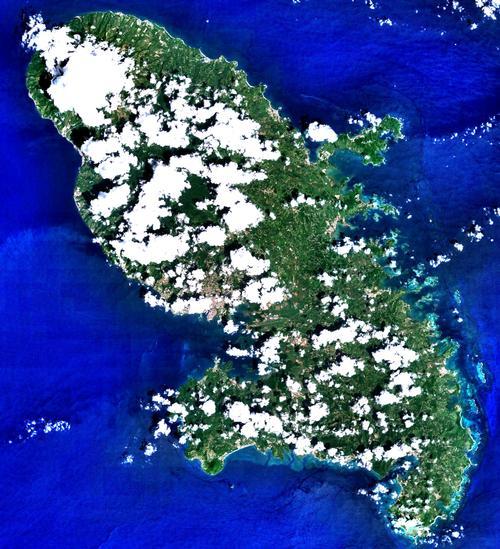 The southern part of the island is also hilly, but lower than the north. The centre of Martinique is flat and consists of a drained swamp. The east of the island borders the Atlantic Ocean. This coastline is rocky. In the west is the Caribbean Sea. Here are fine sandy beaches.

Martinique has a great variety of plant, tree and flower species. Many volcanic slopes are covered with extensive rainforests. Many tropical tree species grow here, including mahogany trees, rubber trees and gourds.

Orchids grow abundantly on the island. Large ferns grow in the rainforests: they look more like trees than plants. The flower gardens on the island are very special, such as the Jardin de Balata in a northern suburb of Fort-de-France.

Many bird species live on the island. Among them is the hummingbird, a very small bird that sucks honey from flowers. Its birds can make as many as one hundred beats per second. The rainforests are home to many tropical bird species. There are also many frigate birds.

Animals that occur on the island are iguanas and chamois lizards. Because of their camouflage colour, these animals are very difficult to distinguish from the wild. Martinique has only one species of snake called fer de lance. This viper is poisonous and can be found mainly in the less trodden areas such as plantations. The chance of encountering this animal is small: they run away as soon as they detect vibrations from other creatures. The mygal is a poisonous spider species that occurs on the island. A bite is painful, but not more dangerous than a wasp sting.

Other species are: the mongoose (black headed lemur), a species of monkey the manicou, a possum and many butterfly species. Many butterflies live on the Caravelle peninsula in the nature reserve of the same name. The coral reefs are home to many colourful fish species and anemones and rare coral species. Common aquatic animals are: the blue marlin, the bonefish, the tarpon, the barracuda and the kingfish.