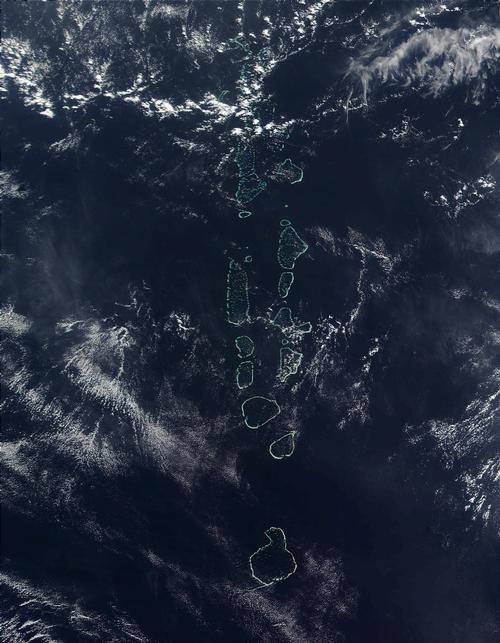 The Maldives lies south of India at 750 km and southwest of Sri Lanka at 650 km. North of the Maldives are the Indian Lakshadsweep Islands and south of the Maldives is the British Chagos Archipelago. Most of the islands are still just north of the equator. The islands were formed after the earth's crust pushed up an elongated ridge. Coral atolls formed around the tops of this undersea mountain range. In those nineteen atolls, many coral islands arose.

In terms of land area and population size, the Maldives is among the smallest countries in Asia. The area of the Maldives is 90,000 km2. This seems a lot but the total land area is only 298 km2 or 0.33% of the total area!!! The largest island is barely 5 km2 and only 9 islands are larger than 2 km2!!! The Indian Ocean strip is 880 km long from north to south and almost 130 km wide from east to west. The Huvadhoo atoll is the largest atoll in the world: 55 km wide and 70 km long. East of the Maldives, towards Sri Lanka, the ocean is 2500 meters deep, and west of the Maldives even 4000 meters deep.

The number of islands is not always the same because sometimes new islands are created and some islands disappear again below sea level. The Maldives is the flattest country in the world according to the Guiness Book of Records, and that may be true; the highest point is three meters! 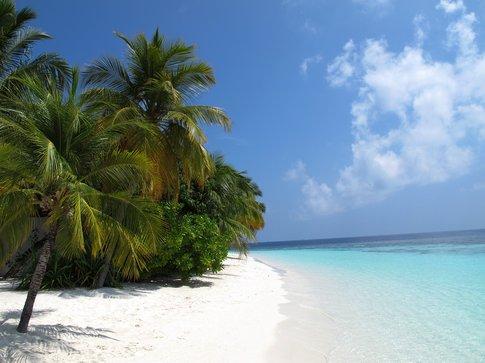 The sea around the Maldives is dotted with submerged reefs and sandbanks. The reefs that protrude above the water are the islands that are usually on the outside of an atoll. The islands are protected from the surf of the sea by high crown reefs. Thilas are located in the inner waters of the atolls and are coral-covered flattened submarine peaks. Coral reefs are made up of calcareous shells of dead coral polyps and grow an average of 1 to 4 centimeters per year. No country on earth is richer in coral than the Maldives.

Freshwater lakes, streams or rivers are not found in the Maldives. Drinking water is drawn from the porous upper layer of the coral limestone. The amount of fresh water depends heavily on the amount of precipitation. In dry times this can cause problems as the water becomes brackish.

Although the Maldives lies on a volcanic sea-mountain ridge, strong earthquakes do not occur.

A major danger for the Maldives is the greenhouse effect and the strongly related rise in sea levels. Pessimists predict that if global warming is not stopped, the Maldives will be gone during the 21st century!