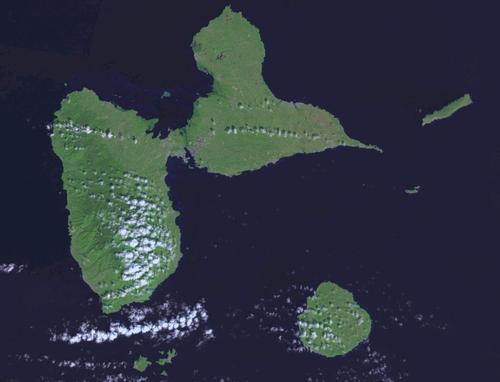 Guadelope used to be called the island of beautiful waters. The volcanic landscape is enriched with numerous waterfalls and hot springs. Nowadays, the inhabitants call it 'the green emerald'. They refer to the tropical rainforests, banana plantations and sugar cane fields that define the landscape. On the coast you will find fine-grained sandy beaches.

The eastern part of Guadeloupe is called Grande-Terre (Big Country) and the western part Basse-Terre (Low Country). Basse-Terre covers an area of over 800 square kilometres and is the larger of the two islands. A volcanic mountain range runs across the island. In the south of Basse-Terre is the highest peak of Guadeloupe and also of the Lesser Antilles, the still active stratovolcano La Grande Soufrière (1,467 m). There are many banana plantations on Basse-Terre. 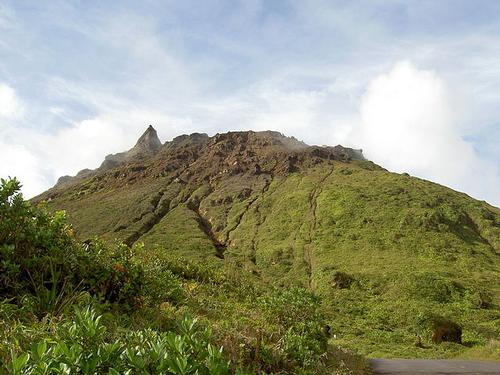 La Grande Soufrière, highest peak of GuadeloupePhoto: Ofol CC BY 2.5 no changes made

The watery and green Basse-Terre contrasts with the dry and arid Grande-Terre. Many slopes of volcanoes on Basse-Terre are covered with extensive rainforests. Numerous tropical tree species grow in these forests, including mahogany trees, rubber trees and gourds. Common flowering plant species are hibiscus and bougainvillea. Numerous orchid species are found on the island. In total, there are no less than 300 species of trees and plants in Guadeloupe.

Many bird species can be found on the island; in particular, the forests are the domain of numerous tropical bird species. There are also buntings (a species of finch) and blackbirds. Well known is the small hummingbird, which sucks honey from flowers with its relatively small beak and is able to move its wings at a speed of 100 beats per second, so that it can hover in the air.

The Guadeloupe raccoon is Guadeloupe's most famous animal. These raccoons live in the Guadeloupe National Park on Basse-Terre. This small rodent is rare and protected. On the islands Les Saintes and La Désirade there are many iguanas or comb lizards (iguana). Thanks to their camouflage colour, they are inconspicuous against the background of green bushes and grey rocks. A striking detail is the enormous tail of the animal, which sometimes covers three quarters of the total length of the animal. None of the snake species found on Guadeloupe are poisonous.