Dortmund is located in the north of the state of North Rhine-Westphalia in the Ruhr area. According to the 2010 census, Dortmund was the 7th largest city in Germany with 580,444 inhabitants. The Ruhr flows south of the city and the small river Emscher flows through the urban area. The port of Dortmund is the largest European inland port thanks to the Dortmund-Ems canal that ends in this port and connects Dortmund to the North Sea. The territory of the municipality is rich in waterways, forests, large parks and agricultural area. There are two well-known large parks, the Westfalenpark and the Rombergpark. Dortmund is also called the "green metropolis" of Westphalia. With the decline of the steel industry in the Ruhr area, Dortmund's face is gradually changing. The economic focus is now on services and high technology. 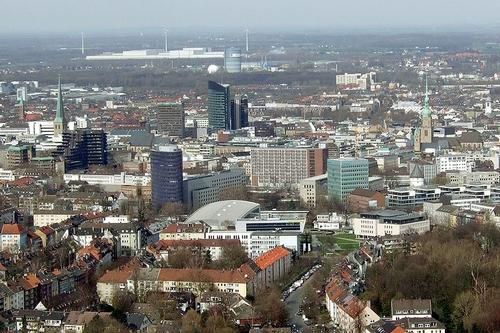 Dortmund is located at an altitude of 76m above sea level in the North Rhine-Westphalia region. The city is located in the plain of Westphalia along the river Rhine. A tributary of the Rhine, the River Ruhr flows through the city.

Dortmund is part of the Ruhr conurbation, a series of cities in western Germany along the rivers Rhine and Ruhr. This area stretches from Bonn and Cologne to Dortmund and Hamm. A large number of independent cities are interconnected and actually function as one city. They form the basis of industrial development in this part of Germany.

Dortmund, like most of Western Europe, has a mild maritime climate, with generally warm summers and moderately cold winters. Temperatures range from 20-24 °C in summer (June to early September) and around zero or slightly above in winter (December to early March). It sometimes snows in winter, but not too often. The least precipitation falls in the spring (April / May). That is an excellent time to visit Dortmund.

The first traces of human habitation date from the Bronze Age. The city was first mentioned in official documents in the year 880. Dortmund was then known as Trutmundi. Dortmund was destroyed by fire during the reign of Frederick I Barbarossa and after its reconstruction in 1152 it became a member of the Hanseatic cities. Due to its location on the Westphalian Hellweg, Dortmund flourished and became a free (Imperial) city in 1226. In 1803 Dortmund was added to the principality of Nassau-Dillenburg, which brought an end to its time as a free imperial city. In 1815 Dortmund came under the Prussian province of Westphalia. During the industrialization of Prussia in the 19th century, the city became the main center of coal and steel production.

During the Nazi period, Jewish synagogues were demolished. At the end of this period, many buildings, parks and gardens were destroyed as a result of heavy bombing by the Allied forces. More than 80% of the city was destroyed. After the war, the city came under the control of West Germany and Dortmund was quickly rebuilt. It became the center of highly advanced technologies and has a rapidly growing population. Today it is one of the most developed cities in Germany.

Numerous churches and bell towers dominate the center of the city. The Reinoldikirche (St. Reinoldus Church) and the Marienkirche are gems of medieval architecture. Dortmund city center still has the characteristics of a medieval city. A ring has been built on the site of the old city wall and the Hellweg, a former part of the medieval trade route is still the main (car-free) street that divides the center of the city into two parts. There are a number of remarkable sights and places that you must see in Dortmund.

The Petrikirche is a Protestant church from the 14th century. It is known for a large carved altar (known as the “golden miracle” of Dortmund) from 1521. It consists of 633 gilded carved oak figures depicting 30 scenes of the last days of Christ. 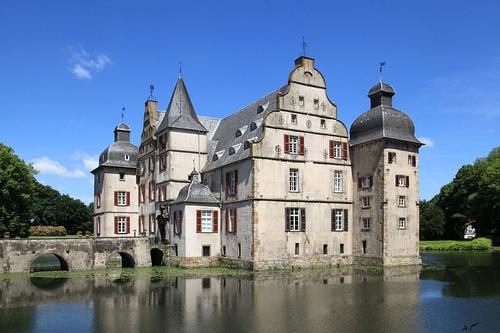 There are beautiful moated castles in Dortmund. and Haus Dellwig from the 13th century was partly rebuilt in the 17th century. The facade and steep tower and two half-timbered houses are original.

The RWE Tower is a 120-meter-high skyscraper, the highest in Dortmund.

The Opernhaus Dortmund was built in 1966 on the site of the old synagogue that was destroyed by the Nazis in 1938.

The major art museum is the Museum für Kunst und Kulturgeschichte. The museum was founded in 1883 and was the first municipal museum in the Ruhr area. In an Art Déco style monument, it focuses on archaeological, folkloric and historical collections as well as art, craft and design, graphic and applied arts. The result is a remarkable balance between a museum of art and one of social history. 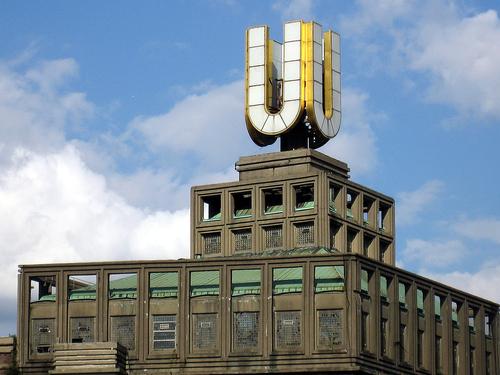 The Ostwall Museum has an extensive collection of 20th-century art and holds special exhibitions that have earned a good reputation across Germany. The collection includes paintings, sculptures, artifacts, 20th century photographs and more than 2,500 prints from 1900 to the present day. The museum is located in a 1926 brewery building.

The city's shopping center extends along the Hellweg. There are impressive and exclusive shops there. You can buy plenty of clothing, shoes, books, media, electronics and jewelry here. Around this shopping center you will find many typical "Bierhäuser" and many large department stores such as Saturnus, Karstadt and Kaufhof.